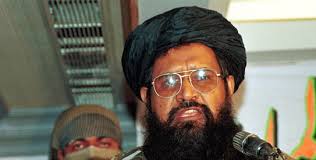 ISLAMABAD: Tagged as “specially designated global terrorist” on September 30, 2014 by the US State Department, the Rawalpindi-based ameer of Deobandi Harkatul Mujahideen (HuM) Maulana Fazlur Rehman Khalil Deobandi is the same person whose services were hired by the Pakistani security establishment twice as negotiator to hold talks with the fanatic clerics of the Lal Masjid in Islamabad in July 2007 and with the GHQ fidayeen attackers in Rawalpindi in October 2009.

Known as the only jehadi linchpin from Pakistan with a record of closeness to Osama bin Laden, Maulana Khalil’s Harkatul Mujahideen was earlier listed as a foreign terrorist organisation in 1997. In a latest move on September 30, the US State Department finally added Khalil to the US list of specially designated global terrorists. Believed to be a Wahabi member of Osama’s International Islamic Front (IIF) for “Jehad Against the Crusaders and the Jewish People” and a co-signatory of bin Laden’s first fatwa (edict) issued in 1998 calling for attacks against the United States, Maulana Khalil was in the al-Qaeda training camps in Afghanistan when they were hit by US cruise missiles in Khost and Jalalabad in August 1998 after the American embassies in three African countries were targeted by al-Qaeda terrorists.

In its charge-sheet Maulana Khalil, the US Department of Treasury described Harkatul Mujahideen as a “Pakistan-based violent terrorist organisation that trains militants and supports activities of many of the best known and brutal extremist groups, including al-Qaeda”. Khalil’s designation takes place less than two months after the State Department updated Harkatul Mujahideen’s foreign terrorist organisation designation to include Ansarul Ummah (AuM), while describing it as a front organisation of the banned HuM. In its update, the American State Department noted: “The HuM has changed its name in an effort to avoid sanctions. Most recently, HuM created Ansarul Ummah as a front organisation, claiming that the group was an organisation for the preaching of Islam, politics and social work. Harkatul Mujahideen operates in Pakistan and engages in terrorist activity in Kashmir, India, Pakistan and Afghanistan”.

The latest US charge sheet claims that Maulana Khalil maintained close relationship with al-Qaeda, including with Osama bin Laden prior to his death. “He visited al-Qaeda training camps and sent Pakistani militants to support OBL’s operatives in Somalia and OBL sent funds to unidentified Pakistan-based individuals via Maulana Khalil prior to September 2001. Harkatul Mujahideen has been involved in numerous acts of terror in the region, including the hijacking of an Indian airplane, an attack on the US Consulate in Karachi and the murder of Wall Street Journal reporter Daniel Pearl”.

In fact, Maulana Fazlur Rehman Khalil is a founding member of the Harkatul Ansar (HUA). Formed in 1993, Harkatul Ansar was renamed Harkatul Mujahideen (HUM or the Movement of the Holy Warriors) after the US State Department designated the HUA as a Foreign Terrorist Organisation in October 1997 and then re-named as the Jamiatul Ansar (JUA) after the Musharraf regime banned HUM in January 2002 under the American pressure. The leadership of the Jamiatul Ansar represents the Deobandi school of Islamic thought, whose members are fanatic Deobandi Muslims who distinguish themselves from other Sunni Muslims by describing themselves as Ansar, the term given by Prophet Mohammad (PBUH) to actual Muslim residents of Medina. With a pan-Islamic ideology, the group struggles to achieve secession of Jammu & Kashmir from India through militant means and its eventual merger with Pakistan.

Khalil has enjoyed a long career in the Afghan and Kashmir jehads. Besides being wanted by the Indian Central Bureau of Investigations (CBI) for his alleged involvement in terrorist activities in Jammu and Kashmir, Khalil is also being sought by the American Federal Bureau of Investigation (FBI) for his alleged links with al-Qaeda. Following the August 1998 US attacks on al-Qaeda training camps in eastern Afghanistan, Khalil had vowed at a press conference in Islamabad that the harm done to the members of his jehadi group by the US missile strikes would not go unanswered. On their part, the Americans still take quite seriously his 1998 public warning at the news conference: “For each of us killed or wounded in the cowardly US attack, at least 100 Americans will be killed. I may not be alive, but you will remember my words.”

Hardly a year after these strikes, Maulana Fazlur Rehman Khalil was chosen by one of the architects of the Kargil operation, Lt Gen Mohammad Aziz Khan, to take part in the daring raid into the Indian territory. After Commander Bakht Zameen Khan of the Al-Badr captured some Kargil peaks, Maulana Khalil fought side-by-side with the Pakistan Army and the Al-Badr fighters and remained part and parcel of the entire military strategies. This wasn’t the first time Khalil was fighting alongside the Pakistan Army. He was a veteran of the Afghan war against the Soviets and acclaimed by his Afghan colleagues for his heroic role in the conquest of Khost city in 1991. Khost was the first Afghan city to fall to the Afghan Mujahideen after the withdrawal of the Soviets from Afghanistan in 1989 following which the communist government in Kabul fell like a house of cards. After the 9/11 terrorist attacks, Khalil sent several thousand fighters to Afghanistan well in advance of the US-led attack and personally commanded the forces.

In May 2004, the Pakistani authorities arrested Khalil for helping transport Pakistani militants into Afghanistan. After six months he was released for lack of evidence. After two American nationals of the Pakistani origin – Hamid Hayat and Umer Hayat – reported to the Federal Bureau of Investigation in June 2005 that they had received training at an al-Qaeda camp run by Khalil, he went into hiding. In March 2006, eight assailants dragged Khalil and his driver from a mosque in Tarnol, about three miles northwest of Islamabad. He was held for five hours, beaten and left in front of a mosque on the outskirts of Islamabad. At the behest of the Musharraf regime in 2007, Khalil had attempted to negotiate with the fanatic cleric brothers of the Lal Masjid in the heart of Islamabad – Maulana Abdul Rasheed Ghazi Deobandi and Maulana Abdul Aziz Deobandi. But the talks broke down after Ghazi insisted that he should be given a safe passage before the media and a delegation of clerics, led by Maulana Taqi Usmani.

In October 2009, the Pakistani establishment hired the services of Maulana Khalil and some other key leaders of several jehadi and sectarian groups to hold talks with the hostage takers (Punjabi Taliban led by Aqeel alias Dr Usman) who had stormed the GHQ building on October 10, 2009. Having stormed the army headquarters and taken 42 people hostage including the security force personnel, the terrorists had listed their demands and expressed their desire to directly hold talks with the then Army Chief General Ashfaq Kayani. They gave a list of the jailed militants belonging to several Sunni militant and sectarian groups, seeking their release failing which the hostages were to be killed one by one.

The negotiators subsequently decided to rope in Maulana Fazal Khalil, Malik Ishaq, Mufti Abdul Rauf and Maulana Mohammad Ahmed Ludhianvi to hold talks with the hostage takers. The negotiators sought 24 hours from the attackers for the release of the jailed militants so that they could be brought to Rawalpindi. But a commando operation was carried out before that in the wee hours of October 11, 2009 and all the terrorists were killed, except Dr Usman.

On June 24, 2011, the Inter-Services Public Relations rejected a June 17, 2011 New York Times report suggesting that Harkatul Mujahideen could have functioned as bin Laden’s support network while he was hiding in Abbottabad, saying the Pakistani military’s counter-terrorism efforts spoke louder than the NYT’s words. “The Pakistan security agencies have suffered the most at the hands of al-Qaeda and have delivered the most against the terror outfit; our actions on the ground speak louder than the words of the Times,” the then ISPR Director General Maj-Gen Athar Abbas had said. The NYT story titled ‘Seized phone offers clues to Bin Laden’s Pakistani links’ said: “The cell phone of Osama bin Laden’s trusted courier, which was recovered in the raid that killed both men in Pakistan last month, contained contacts to a militant group that is a longtime asset of Pakistan’s intelligence agency.”

Quoting anonymous officials, the daily said the discovery indicated that Osama used Harkatul Mujahideen as part of his support network inside the country. The cell phone numbers, NYT said, provided one of the most intriguing leads yet in the hunt for the answer to an urgent and vexing question for Washington: How was it that Bin Laden was able to live comfortably for years in Abbottabad? The Harkat, the report claimed, had deep roots in the area around Abbottabad and the group’s chief Maulana Khalil lives unbothered by Pakistani authorities on the outskirts of Islamabad. Some phone numbers of Harkat commanders retrieved from the courier’s cell phone were in turn determined to have called Pakistani intelligence officials. But Maj-Gen Athar said: “The army rejects the insinuations made in the NYT story which is part of a well-orchestrated campaign against our security institutions”.