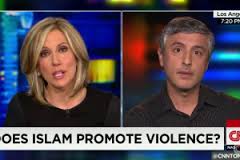 In responding to Bill Maher, Reza Aslan misrepresents religious extremism as a country base issue.  He criticizes Saudi Arabia and Iran but in a staggering display of obfuscation presents Turkey, Indonesia and Malaysia as model muslim majority nations! Instead of seriously considering the development and growth of Pan Islamic retrogressive movements such as Wahabism/Salafism in the Middle East and its ideological cousin, Deobandism in South Asia, Azlan misrepresents religious extremism as a national and or cultural issue.

This problem is reflected in his writings as well.  In a detailed interview with Dissent Magazine, it is perturbing to see Reza Aslan’s flippant attitude towards these pan Islamic movements.

He seems to be admiring Syed Quttab , Hassan al- Bana , Sheikh Jamaluddin Afghani and refers to them  as pioneers of  Reformation in Islam. He tries to demonstrate that these Salafist and Deobandi ideologues were somehow developing an anti-colonial identity  that was different from the western concept of religion which takes religion as the personal matter of a person.   As per Reza, these Wahhabi intellectuals were those who shook the palace of the old Muslim clergy and their authority on religious and other matters.

But actually Syed Quttab , Hassan al-Bana , Syed Rashid Raza , Syed Modawdi and others actually revived the extreme ideas of Muhammad bin Abdul Wahhab Najadi and offered old wine with a new label.  The consequences of their so called Reformation is the rising tide of barbarism and brutality in the name of Islam by organizations ranging from Boko Haram, Al Qaeda/FSA/Al Nusra, ISIS to the Taliban.

Even Ayatullah Khomeini was influenced by the writings of Syed Qutb when he provided his version of the Velayat-e-Faqih.  Not all Shias agree with this version of theocracy and a vast number of them prefer the traditional Quietest version espoused by Ayatullah Sistani. Just as all Sunnis do not advocate for the totalitarian Caliphate espoused by the Salafist-Deobandis – all of whom base their extremist movements on the writings of Abdul Wahab, Afghani, Qutb, al-Banna and Mawdodi as well as the medieval polemicist Ibne Taymiyyah.

Reza’s blinkered notion of “Cosmic War ” to describe the terrorism of Al Qaeda and other so called Jihadists actually ignores the fact that the process of Wahabisation is itself a Cosmic War and this is not only against the West but its primary targets are Sufi Sunnis, Shias , Christians, Jews , Ahmadis, Zorastrians and other those sects which do not agree with Wahabism and Deobandism and come forward to resist against its forced proliferation.

Reza Aslan is a prominent part of the  Islamophobia industry which is populated by well dressed apologists engaging in shallow rhetoric.  Those who are not familiar with the complexities and nuances within diverse muslim communities and the significant presence of extremism fueled in large part by the Saudi funding for Wahabism and Deobandism are likely to fall for the well presented apologist arguments of Reza. They are likely to fall for the notion that any criticism of muslim extremists or criticism of prevailing extremist trends is akin to discriminatory behavior.

Islam is a religion, not a material entity.  Yes, there is discrimination and ill treatment of muslims in the West but those like Reza Aslan and other Saudi funded organizations like CAIR, ISNA present a distorted picture of the sporadic instances of discrimination.  In order to understand where  Reza Aslan is coming from, one simply needs to study the Mehdi Hasan types of England.  Aslan is simply  a more sophisticated version of England’s Mehdi Hasan.

Islam is not monolithic.  Extremist trends that are prevailing amongst muslims need to be called out without the fear of being tagged as an Islamophobe.  As demonstrated earlier, it is apologists like Reza Aslan who sugarcoat and grossly misrepresent the very basis of extremism.

While Reza limits his criticism to Iran and Saudi Arabia and creates a false binary between them, he is silent on the Saudi influence and funding of mosques all over the world – especially Europe and North America.  The fact that Saudi prince Bander’s declaration to commit Shia genocide is not even being discussed just shows how problematic Reza Aslan’s discourse is.  Conveniently missing is the fact that thousands of homegrown Jihadis have joined ISIS from  North America and Europe and have been facilitated by Reza Aslan’s favourite example of an ideal muslim majority country, i.e. Turkey.

“Some time before 9/11, Prince Bandar bin Sultan, once the powerful Saudi ambassador in Washington and head of Saudi intelligence until a few months ago, had a revealing and ominous conversation with the head of the British Secret Intelligence Service, MI6, Sir Richard Dearlove. Prince Bandar told him: “The time is not far off in the Middle East, Richard, when it will be literally ‘God help the Shia’. More than a billion Sunnis have simply had enough of them.”

In the same manner, Aslan glosses over the issues in Turkey, Malaysia and Indonesia. There is systematic persecution of Shias, Christains and Ahmadis in these countries has reached frightening levels. When Malaysia and Indonesia host anti-Shia conferences that incite violence and promote genocide against 200 million +, one cannot just ignore this.

Is Reza Aslan’s deliberate obfuscation of presenting the virulently anti-Christian, anti-Shia, anti-Sufi and Anti-Ahmadi nations of Malaysia and Indonesia as “ideals” rooted in his own sectarian biases?

In this apologist interview, Reza Aslan dismisses the horrible widespread practice of female genital mutilation (FGM) as an “African issue”  – a racist and misogynist generalization that is also blatantly false.  Unfortunately, FGM has the support of secondary hadith literature (Ibne Dawud) and is widely advocated in Indonesia and Malaysia – two countries being promoted by Reza Aslan as “moderate” and respectful of women’s rights!

Reza Aslan is like many other apologists who never get into specifics about the common Salafist-Deobandi creed of the Taliban, ISIS, Boko Haram and Al Qaeda. Understanding the different ideologies in Islam is very important to addressing issues of extremism within Muslims. Shallow and selective apologist rhetoric from people like Reza Aslan where they lump the victims and perpetrators in one category is as problematic, if not more so, than the sweeping criticisms of talk show pundits like Bill Maher. While some of Maher’s criticism is simplistic and rooted in his own biases, not all of his criticism can be dismissed outright. Critics like Bill Maher need to be engaged with not dismissed in the ostrich manner of Aslan’s selective rhetoric.

There is a problem in the muslim world and acknowledging this is not “racist” – a term used by Ben Affleck to dismiss Bill Maher. Muslims are defined by faith, not race!

The Pan Islamic movements of the last two centuries have directly given birth to Salafist-Deobandi movements like Boko Haram, ISIS, Taliban, ASWJ-LeJ.  These Pan Islamic trends have also influenced the harsh and oppressive anti-women laws in countries like Iran and Pakistan.  It is these Pan Islamic movements that are leading to the destruction of Sunni, Shia and Sufi shrines.  It is these movements that have lead to Shia Genocide and persecution in Pakistan, Iraq, Syria, Indonesia and Bahrain. It is these Salafist-Deobandi dominated movements that lead to increasing attacks on traditional, Sufi-leaning Sunnis as well as Christians and Hindus.  The Yezidis, an ancient Zorastrian subsect was facing a virtual genocide at the hands of the transnational Salafi-Deobandi terrorists of ISIS.

Burying our heads in the sand and pretending that these are local Saudi issues – as Aslan seems to be doing with his flippant and dismissive attitude towards extremism – is a recipe for even worse disasters.  Muslims need to confront and oppose the extremism within or else face up to the sweeping generalizations of liberal critics like Bill Maher.