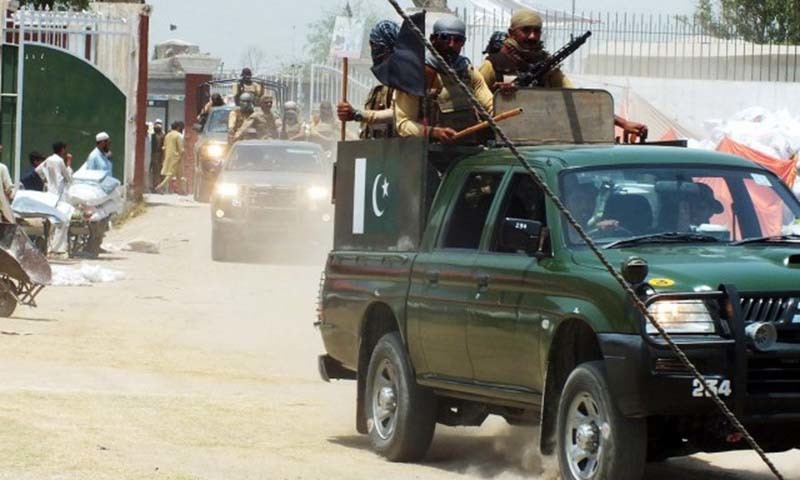 ISLAMABAD: A senior military commander called on Wednesday for action against terrorist groups in southern Punjab and Balochistan, saying the successful Zarb-i-Azb operation was not enough to end the terrorist threat in the country.

“Terrorism cannot be eliminated without intelligence-based operations throughout the country – particularly in Southern Punjab and Sindh,” Corps Commander Peshawar Lt Gen Khalid Rabbani said while briefing on Zarb-i-Azb at the National Defence University.

The operation in North Waziristan, started in mid-June, is said to be progressing well. The feared blowback that delayed the operation for years, the army says, was pre-empted by about 2,200 intelligence-based operations throughout the country in which about 42 terrorists were killed and another 114 arrested.

The Peshawar corps commander appeared to be calling for greater focus of these operations on Southern Punjab and Balochistan and a stronger political backing for these actions.

While extremism is spreading fast in the country, banned organisations have, in collaboration with the outlawed Tehreek-i-Taliban Pakistan and Al Qaeda, established bases in Southern Punjab. The government has turned a blind eye to the problem.

Gen Rabbani hinted that political issues, in addition to capacity problems of civilian law-enforcement agencies, were impeding action against terror groups in Punjab and Balochistan.

He said that although terrorists had so far failed to strike back, the blowback in future could not be ruled out.

The corps commander recalled that political indecisiveness had already delayed Zarb-i-Azb for at least three years.

He said it was agreed in principle that “military means must be politically driven”. This, he maintained, led to delay in start of the operation.

The army, Gen Rabbani said, had been trying to convince the government since 2011 for starting an operation in North Waziristan.

“The nation had wanted to wish away the problem in North Waziristan not realising its gravity,” he said, adding that “had our leaders seen what was coming and taken timely decisions a lot of casualties could have been avoided”.

The corps commander said the military alone had lost over 4,000 men in the fight against terrorism and most of the casualties happened over the past few years.

Speaking about the country’s diffidence in taking the problem of militancy head on, Gen Rabbani said the army in early years of the war on terror remained undecided about dealing with it.

“For two-three years (at the beginning) the army too remained confused about fighting our own people. Lot of time was wasted then,” he noted.

The army launched the first major operation against the TTP in South Waziristan in 2007.

Talking about the progress in Zarb-i-Azb, the corps commander said a major portion of the tribal agency’s 4,707 square kilometres had been cleared.

He likened the Boya-Degan region of North Waziristan, cleared by military recently, to “Pentagon of Al Qaeda”, which housed the terror group’s communication network and command and control centre.

“Our action has destroyed their system, wherewithal and will to fight,” he added.

He claimed that there was no possibility of return of foreign fighters to the area.

Dispelling a perception that Haqqani network fighters were spared, the general said most of them had left the area before the army went in, but others were targeted and eliminated.

“Those who took up arms against us were targeted. Many of them have been captured, killed or pushed out,” Gen Rabbani said about the Haqqani network.