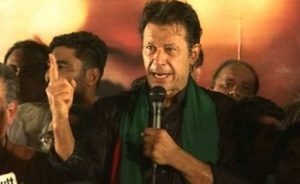 Ever since Imran Khan started his march on the 14th of August the question hanging over Pakistan has been, “Where would it end?” Put your calculations aside and don’t fret as already a lot of positive has emerged from this march and the subsequent sit-in. Whether or not his personal politics benefit from it, Imran Khan has upended the political landscape. Imran has exposed, if not instilled, a public rage toward Pakistan’s political class and a lack of widespread confidence in the usefulness of Pakistan’s democratic institutions and its politicians. People of Pakistan are disgusted with political establishment as a whole. Besides stirring the masses, Imran has drawn immense support from middle-class professionals and college students, the demographic groups often dismissed as politically apathetic in Pakistan. For the first time in the country’s history, Imran has convinced the upper middle class and the youth of this country that they are active agents of change.

No doubt, Imran has disquieted many who are vehemently oozing hatred for him. Of course, the people who are most worried are the architects and hangers-on of the political status quo in Pakistan. To the best of my judgment and my life’s work, I feel confident that most of the people opposing Khan today are those who want to perpetuate the Status Quo in Pakistan. These include not only the corrupt politicians and their cronies but also the crooked bureaucrats, pseudo-liberals, drawing-room intellectuals, chattering classes, Islamist fundamentalists, religious fanatics, shady businessmen and so forth. Their motivation for doing so is obvious and they can be mainly divided into two types. One, those who are the beneficiaries of the status quo and two, those who have a grudge against this country for one reason or the other and do not want it to have a chance to shake off its troubles.

They are on the wrong side. Because, whatever the outcome of Imran’s present movement, the status quo is gone, it is dying. What Imran has already achieved cannot be undone at the flick of a switch. They cannot just wish it away, no more. What Imran has already inspired has far reaching consequences. It will affect the Pakistan that our children inhabit; it will affect everybody forever, across the whole country. I cannot think of a bigger change facing us all. I think it is really important that the future of democracy in this country is not going to be simply a question of the two parties creating some tablet of stone and then saying there you go this is the take it or leave it recipe for democracy.

Much as what the pseudo-liberals like to pretend, the current democracy is nothing but a legacy of Zia ul Haq, a continuation of his politics of patronage. Almost the entire breed sitting in the parliaments today is the political class that emerged in the 1985 elections and has since ruled the country in one guise or the other, with one political setup or the other. After the demise of Benazir Bhutto, there is no significant leader on the political horizon of Pakistan who, at one point or other, did not kowtow to Zia ul Haq. (Imran Khan is the only exception.) So strong was Zia ul Haq’s legacy that when Benazir came into power in 1988 she had to discard most of the old guard of the PPP and her interior minister was a man (Aitzaz Ahsan) who was the second person to betray and desert her father in 1977 and had been a close comrade of Asghar Khan, the man who publicly asked for and rejoiced in the hanging of her illustrious father, for over eight years until Asghar Khan expelled him in 1985. It was only in her second term that Benazir was able to appoint an interior minister –Naseerullah Babar- who had remained away from Zia ul Haq. If Pakistan has to ever step out of Zia’s shadows, this political order of 1985 has to die. This is the political order whose apex parliament never clearly debated nay condemned the massacre of 17th June in Model Town. For me what matters a lot is that after 37 years, Imran has upended Zia’s political heritage of corruption, sleaze, cronyism, nepotism, and opportunism personified by a political creed where the same faces keep hopping from one political party to the other.

In a media-saturated political culture, Imran Khan presents an irresistible figure: a simple man with mammoth real life achievements behind him, a man of immense charisma, courage, determination, and energy. All his detractors can accuse him of, with any semblance of credibility, is that he lacks political acumen, his methods are reckless, and his language rash. That only adds to his appeal in comparison with our lot of corrupt, slick, selfish, and crooked politicians. Imran deserves a lot of credit for presenting us with a choice between two alternatives: the status quo and a comprehensive reform proposal that departs from the status quo in several dimensions – foreign policy, police, electoral fairness, education, transparency, accessibility to justice etc. The supporters of the status quo are trying to divert people’s attention to minor details of Imran’s methods from what he is actually protesting for. This is a very clever attempt to fudge the real thing – a public multi-issue debate to resolve the problems that Khan is pointing out. The change that Imran has set in motion will one day dismantle the privilege-barriers that have protected the feudal lords, clergy, urban oligarchies, and corrupt moneyed people to establish the principle of equality before the law. Sustained political mobilisation of the educated middle class will change the political culture and it is only a matter of time before the consciousness of people destroys the power of oligarchies and elites opposed to the change that Pakistan is clamouring for.

With or without Imran Khan, the change he has instituted will march on.