September 6th was like any other day in Karachi with atleast two Shia muslims target-killed.  The first was a housewife who was shot dead in her car with her 3-year old child.  Both DAWN and Express Tribune  report the incident as a “mugging attempt” which was resisted by the victim.  There is a subtle implication of blaming-the-victim.

This report clearly does not add up.  At least Express Tribune admits there were no clear eye witness reports of an attempt to resist mugging.  The ET report does provide some more clarity than DAWN but that is not saying much.  As per the ET accounts, it seems more likely that the victim was a target killing.  The victim was also Shia muslim and this was the third target killing in her family in less than 18 months.  It is actually insensitive to the memory of the victim to portray her death due to her “resisting” a mugging.

The murder of a prominent Shia community leader and speaker, Shaheed Ali Akber Kumaili is also being given a political twist by Karachi police chief, Ghulam Qadir Thebo. 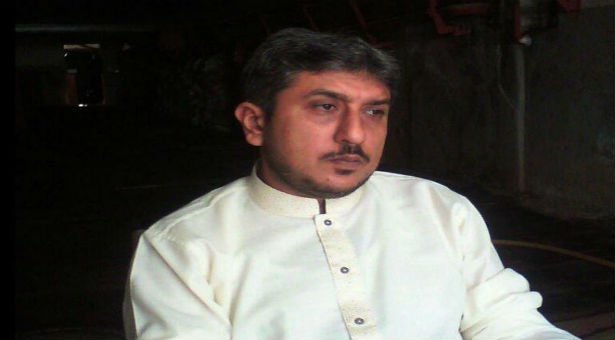 “Similarly as far as the killing of Ali Akbar Kumaili is concerned, we need to look at every possible aspects and one of them is political motivation. In recent weeks, we have found that a few killings that had earlier been thought to have been carried out on sectarian grounds were actually carried out for political reasons.”

This is typical dishonesty on the part of the police chief when he stresses the need to look at every possible aspect but not even bother to mention the name of Deobandi terrorist organization, ASWJ-LeJ, whose publically avowed goal is incitement against Shias.

In the last couple of weeks, with Shia Genocide continuing in Karachi, there has been a tendency to misrepresent the victims of Shia Genocide as political murders.  DAWN did this just days ago with the murder of Aqeel Abbas where his MQM membership was obliquely mentioned to deflect attention away from his Shia identity.  Similarly, just last week, after a Shia doctor, Naseem Jaffary was killed, his PPP affiliation was mentioned.

It seems that having failed to stop Shia Genocide and being complicit in this at varying levels, MQM and PPP now want to misappropriate the victims of Shia Genocide as political martyrs to maintain their declining status quo.

How is it possible that MQM can shut down the entire city of Karachi with its population of 20 million in one half hour but still remain clueless on the daily target killings of Shias in their heartland areas such as North Nazimabad and Azizabad?

PPP’s Qaim Ali Shah has sabotaged Sunni Sufi-Shia protest rallies in his hometown of Khairpur.  Along with Manzoor Wassan and Khursheed Shah, he is alleged to be in cahoots with ASWJ-LeJ.

Both MQM who dominates Karachi and PPP which is governing Sindh are complicit in Shia Genocide.  And the media is acting as a willing partner by obfuscating this issue.