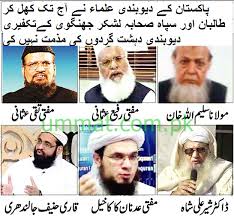 With Operation Zarb-e-Azb in full swing, can a politicised silent Shia-Sunni majority challenge the prevalent status-quo sponsored narrative of religion? Tahir ul Qadri has pitted himself against more extremist Deobandi groups and sectarian issues boil just below the surface. The Shuhada Foundation of the Lal Masjid clique openly call him a terrorist while Qadri rejects any comparison of the Model Town massacre to the Lal Masjid incident.

He says the Pakistan Awami Tehreek (PAT) workers are not demanding Sharia by force, ordering people to close down markets, banning female education, or restricting their free movement as is being enforced by their ideological brethren in the Middle East. With the rise of Dr Qadri, Deobandi hardliners and TTP sympathizers appear to be wary of the alliance of Shia and Sunni Barelvis,a rare occurrence.

The Ahl-e-Sunnah-Wal-Jamaat (ASWJ), formerly Sipah-e Sahaba Pakistan, a Takfiri faction of Deobandis, has said this is an internationally sponsored conspiracy to start a civil war in the country.Apart from using Qadri to balance PML-N in the Punjab by state created parties like PML-Q, Qadri has also been important for the MQM. His Barelvi support base can be instrumental in countering the Taliban influence and the militant Sunni Tehreek.

PAT’s struggle is as political, constitutional and democratic as PTI’s and if compared with other religious entities, they have not attacked anyone nor made any threatening statements against the army. Rather, they are constantly expressing full support of the Zarb-e-Azb operation, and have portrayed their inclusive stance reaching out to the Majlis-e-Wahadatul Muslimeen and even Non-Muslim groups.
One of the biggest gripes that Barelvi mullahs had was that their madrassas and mosques were being forcibly occupied by Deobandis as they had greater money to spend and modern weapons to intimidate. Now the Sunni Ittehad Council, a large alliance of Sunni Barelvis that opposes the Taliban ideologically, supports him. His long march has been well organized and peaceful. His 10-point normative agenda is also clear.

He wants social welfare and condemns terrorism (in his famous 600 word fatwa). What is questionable is the funding behind him, the actual extent of political power he has acquired and the sustainability of such a movement already laden with enormous opposition and structural thorns. As for huge public support, let us not forget that agencies can easily put processions together. Qadri is not in charge of a monolithic Barelvi movement as much as he would like to believe. The Barelvi vote does not follow closed-group dynamics so it is unclear how deep Qadri’s tendrils are into the Sunni population.

The sectarian angle of Inqilab March

“Sectarian divide is quite visible in these movements and alliances,” observes Muhammad Amir Rana, executive director Pak Institute of Peace Studies (PIPS), an Islamabad-based think tank and research group working on security and peace, while talking to TNS.

Talking to the Shiite News, they said, leading Shia party Majlis-e-Wahdat-e-Muslimeen has successfully isolated the takfiri terrorists and their allies in Pakistani politics. They noted it that Allama Sajid Naqvi’s Shia Ulema Council had successfully continued as Deobandi parties ally but Sunni Bralevis’ dominant parties are allies of the MWM.

“Majority of Deobandi leaders always have a soft corner for takfiri Taliban, Sipah-e-Sahaba (now called ASWJ), and such intolerant terrorist outfits despite their alliance with Allama Sajid Naqvi,” one of Karachi-based political observer said.

Two ‘inquilabs’ and no minorities
Marvi Sirmed
The Nation

While at the people’s level, I can say with confidence that there is little discord. In all kinds of neighborhoods, Shias, Sunnis and Deobandis live peacefully. The peace however, is a whisper away from carnage. The state has undoubtedly been patronizing Deobandi extremist organizations, with undeniable linkages of the ruling party with these organizations. That probably explains why portions of our persecuted Shia community are standing with the bearded Inquilab of Mr. Qadri, a Barelvi cleric soft on Shiites. Who could blame them for that? The state and the ruling party have left little reason for them to see the PMLN stay in power.

Wrongs in the first year of Pakistan

In addition to opting for the governor generalship, Jinnah made another important decision on the Independence Day; for the flag hoisting ceremonies in Karachi and Dacca (now Dhaka) two Deobandi religious leaders — Maulana Shabbir Ahmed Usmani and Maulana Zafar Ahmed Usmani — were given the honour of unfurling the national flag. Despite their common surname i.e Usmani, they were not related but both belonged to the Deobandi school of thought. It is pertinent to mention here that most Deobandi scholars were either with Congress (such as Maulana Abul Kalam Azad) or with Jamiat Ulemae Hind (such as Maulana Hussain Ahmed Madni). Contrary to the mainstream Deobandi politics of Indian nationalism, the two Usmanis had supported the Pakistan Movement and by giving them the distinction Jinnah had rewarded them in kind.

Interestingly, when the first cabinet of Pakistan took oath on August 15, 1947, there was an unlikely person to be inducted as the first minister for law. By choosing Jogendara Nath Mandal, a Hindu, Jinnah was probably trying to send a signal that despite the two Deobandis hoisting the national flag, Pakistan was not going to have a Muslim-only government. Though, ultimately the first signal proved to be long-lasting than the second and neither could Mandal survive for long nor his Hindu community had a bright future in Pakistan. In the final analysis, Deobandis seemed to have an upper hand.

To sum it up, at least six important seeds were sown in the very first year of the nascent country that grew into thorny bushes. First, the early signs of the power play between the head of state and the head of government became visible. Second, an unnecessary limelight was provided to the Deobandis who later on craved for even greater chunk of the pie and kept encroaching upon the social space. Third, the dismissals of the provincial governments in the NWFP and Sindh — without any vote of no-confidence in the assemblies — set the country on the path of similar dismissals. Fourth, the detention of political opponents and imposing bans on their activities could hardly cultivate democratic traditions. Fifth, the use of corruption charges became a hallmark of the establishment against political rivals. And last, the disregard shown to legitimate demands of provinces in terms of not recognising other languages has continued to this day.