Home  »  Original Articles   »   Slaughter of Iraqi Yazidis? Why should we care? by Rusty Walker 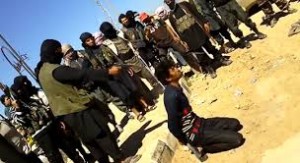 ISIS make no distinction among Shias, Christians, Jews, Ahmadis, Sufis, Hindus- they are all Infidels and must be killed.

Why should we care about the Yazidis? And, who are they?

Yazidis in Iraq are in danger of genocide by the “Islamic State,” i.e., the Islamic State of Iraq and the Levant (ISIS). The United States pull-out left a power vacuum in the region. Predictably, these emboldened, radical Sunni Jihadists, the ISIS, have subsequently rampaged through Iraq in attempts to establish hegemony over as much of Iraq as possible.

Why should we care about the Yazidis? We should care about the Yazidis, of course, because we are on the side of Human Rights, and these are war crimes. But yet another larger issue emerges as an unchecked bloodletting of innocents by ISIS has encouraged the Salafist ideal of their long-proclaimed Fundamentalist (Sharia Law) Sunni Caliphate. The ISIS is infatuated with their own self-serving and errant interpretations of the Quran, and in direct opposition to it, perpetuates Muslim on Muslim murder.

The “Islamic State” prosecutes their violent passions unguided by logic. They provide their justifications with a moral certainty reminiscent of the 17th Century Salem witch trials. Following that century (18th and 19th Century) a new draconian, Islamic theology and ideology in the Arabian tribal regions emerged: a Muslim scholar, Muhammad ibn Abd-al Wahhab, hence the name “Wahhabism.” Wahhabis prefer the term “Salafist” despite academic and scholarly debates, the two are for all intents and purposes, synonymous, imposing a religious tyranny, devoid of the free and ijtihad-oriented theology originally intended by Mohammad (PBUH). Wahhab collaborated only with Mohammad ibn Saud, then an Arab chief. Today Wahhabism is the official Islamic practice of Saudi Arabia. They reject Christians, Jews, Ahmadis, Sufis, Hindus and Shias with a religious duty to kill them. Their tribal-based austere traditions included subjugation of women.

The India-founded Deobandi Sunni sect is represented here, as they are also aligned with, and funded by, Saudi Wahhabis/ Salafists. Therefore,  Takfiri Deobandi, Salafists and ISIS hold the same radical beliefs, dogma and goals. Anyone who does not profess to this ideology was, and is, deemed an apostate, disbeliever or idolater, thus making the shedding of their blood and confiscation of their wealth permitted. All these terrorists aspire to a world-wide Caliphate.  The first targets of the ISIS to succumb to this perverse religious dogma in Iraq were beheaded or gunned down after being condemned as infidels, were the Iraqi Shias and Christians.

Now added to the Shia and Christians are the Yazidis. Who are Yazidis? They are a minority culture, about 600,000 Yazidis worldwide, but the vast majority – perhaps 400,000 to 500,000 – live mainly in northern Iraq, their home for almost 1,000 years. They are often mistaken for Kurds and have infused Kurdish, Persian and Islamist traditions into their culture. Yazidis are a minority tribal culture that is pre-Islamic, but overtime developed roots in Christian, Islam, Mithraism, Kurdish traditions. They do not consider themselves Islamic. But, their beliefs are their right, and irrelevant if there is such a thing as freedom of religion.

Why should the world care? Because al Qaeda, and bin Laden were merely the nascent growth of radical Sunni Islamists world-wide. Many have felt self-satisfied after bin Laden was captured and killed. This is part of the weariness and myopia of the masses after prolonged wars. It was a phenomenon after WWI; no one wanted to hear of trouble abroad; and it was out of such a malaise that WWII became a reality.

Wasn’t the Afghanistan invasion expected to be a short operation? Wasn’t the invasion of Iraq to be a welcoming committee for Americans? Both became the dreaded decade long “war of attrition” and “quagmire,” terms Americans resisted at the time in comparisons to Vietnam. The ignored Iranian Green revolution, the myth of an Arab Spring and Libyan liberation, has contributed to public confusion leading to general insouciance. How many terrorist acronyms can be formed before the free world becomes confused and the mainstream press uninformed?

Consider attempts of ordinary citizens in the Western world to absorb Middle Eastern and South Asian events that involve terrorism, assassinations and authoritarian regimes stoning women to death who were raped, egregious events that from afar do not seem to impact them. Even in their own country, authorities turned heads away from Baloch horrors of “kill and dump” policies, Afghanistan Hazara murders, Shia genocide in Pakistan, Hindu and Christian slaughter throughout South Asia. Mindful of this, the advances of Syrian rebels we celebrated as our friends against our enemy Bashar Hafez al-Assad, how do we then digest that the ISIS infiltrated those rebels? This latest development of ISIS in Syria and Iraq is evidence of part of the global, expanding and emboldened Caliphate-goal Islamists. The free world has been minimizing this since we became war weary. So, to answer the essay question, “we should care” about Yazidis, as we should have cared about the prior global genocides, in Rwanda, Darfur, Pakistan and now, Iraq. Ignoring them, they grow, and appeasement or negotiation with terrorists emboldens them. Terrorism grows exponentially with apathy.

Inside ISIS and the Iraq Caliphate (Journeyman Pictures):

Today Yazidis are being pursued by these same ISIS Salafists, the “Islamic State.”  ISIS warned they “would take the girls and rape them if they did not convert to Islam.”

Enter the Jihadists: Takfiri Muslims that are Salafists, or, Wahhabi Arabs, who are considered extremist Sunnis. Takfiri refers to those Muslims who consider themselves the gatekeepers of righteousness regarding Islamist Muslim faith. In this self-appointed position they justify murder of innocents, who disagree with their interpretation of Quranic Jihad.

The majority of the world’s Salafis are from Qatar, UAE and Saudi Arabia; a smaller group are Bahrainis and Kuwaitis. The Salafi movement is synonymous with Wahhabism, traced to the 9/11 bombers, and the origin of the Madrassas that are still world-wide schools of orphan suicide bombers run in Southern Saudi Arabia, and Pakistan. They are part of the Saudi petro-funded infiltrators causing American mosque radicalization.

For clarity, while the free world has understandable repellant for the Muslim oppression of women in most of the world, peaceful Muslims such as moderate Sunnis, nor Islam itself, should not be categorized as the threat to global peace. “Islamists” are the problem.

These are the murderous “Islamic State” you are now hearing about in Iraq. They are fundamentally no different than: al Qaeda splintered groups, LeT, LeJ, or ASWJ, Haqqani Network, TTP, Taliban in Pakistan and across the Durand line and all the other names ISIS, et, al. having one purpose: world dominance.

The ISIS captured Sinjar in Iraq, this month. Leaving devastation in their wake, they murdered men, women and children. Many Yazidis families with their children were forced to flee their homes and venture into the mountain terrain (press reports approximately 50,000 Yazidis). The Mount Sinjar is mean terrain, and certain starvation. At this point the ISIS has exhibited genocidal intent on Yazidis, considered Kafirs.

Fortunately the U.S. administration is taking action and assisted the Peshmerga fighters with airstrikes, and a U.S. drone strike destroyed a militant mortar position threatening Kurdish forces defending refugees near the Syrian border. The U.S. along with the British and Australian humanitarian air drops of food and water onto Sinjar Mountain and US airstrikes against militants in support of the minority Yazidis has helped. Kurd military rescued several thousand Yazidi refugees in crossing the Tirgris in time, into Syria.

The U.S. is providing assistance in arming advanced weaponry for Peshmerga fighters who are protecting Yazidi.

Shia militiamen are expanding to meet the challenge. Some aligned with Asaib Ahl al-Haq, a splinter group from the well-known Shia leader Muqtada al-Sadr. Prime Minister al-Maliki appears to be accepting the assistance of this very same sectarian militia he overcame in 2008, the portent of which does not bode well for his own national army effectiveness. They have been outgunned so far. It isn’t out of the question that this is metastasizing into a civil war between Sunni and Shia sects, encouraged by Iran, who has everything to gain.

Why should we care about the Yazidis? Ignore Yazidis at our own peril; terrorism grows exponentially with apathy.