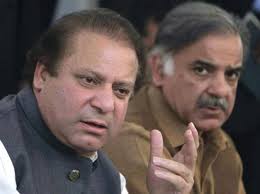 A rare good Asif Zardari did was to show us that Tahir ul Qadri, for all his rabble-rousing, is of no real consequence. Come the PMLN and this self-serving demagogue is turned into a monster. His innocent followers were tortured and butchered in cold blood just a few kilometers away from the present government’s real seat of power. Tahir ul Qadri arguably shows some traits of what psychologists refer to as malignant narcissism, a dangerously heightened sense of self importance. Otto Kernberg, a leader in the study of personality disorders, describes malignant narcissism as “extreme self-absorption and insensitivity that often result in a trail of victims — emotional wreckage left in the narcissist’s wake.” What is surprising is how ineptly the PMLN government has played in his hands.

Imran Khan may have a tendency to shoot his mouth off without much sense, but he has been consistent in airing his grievances since last elections. These grievances could have been addressed in a fair and transparent manner without much damage to the present dispensation in Islamabad, but they were not. We all know what Imran and his supporters are upset about and some of these grievances, to be fair, are perfectly reasonable. But no one in the government cared to have a look. Pushed into a corner, Imran now feels that, to save face, he has to force an election. As his protesters are about to hit big time, the government is making him offers that it should have made when Imran first made his grievances known. Doing so now only further undermines the government’s legitimacy.

The thing is, in Pakistan, people who place plunder over people, family over country, self-interest over justice, and oppression over equality run our governments, every successive one of them. Thus, you give opposition a whiff of legitimacy and people gather together behind the opposition -not so much in solidarity with its demands but to express their frustration against a feeling of mass injustice that is a part of their daily lives and the brunt for which is always borne by the sitting government. This present government has done exactly that, lending legitimacy to the PTI and PAT.

Every general election in Pakistan feels like being in the movie Groundhog Day with the same players (save one new the last time), going through the same shenanigans, electing the same people, everyone stuck in the same place, doing the same thing. Pakistani voters, the message seems to be, are just a bunch of fools who have to be periodically suckered so the ruling elite can dismantle their country. Most voters show their contempt for the whole mess by abstaining, hence every winner of these elections, invariably, has been a long way off majority territory at the national level. As an aside, I think, though, we have to look at ourselves and ask why such leadership is being granted today. Why are the lack luster, the inept, and the downright eerie able to gain such popularity and those positions in Pakistan? What is going on? Thanks to our mis-educated economists and our politicians looking to plunder, any self sufficiency potential of Pakistan has been destroyed and we are living off from the sale of the country, in every respect, from under our feet. Pakistan’s loss of the past seven years has been the chance to do something effective and ground-breaking in so many different areas –terrorism, extremism, human rights, power generation, women rights, resource sufficiency, making business accountable, geopolitical strategy, tax collection- it is a tragedy that we have had such wimpy failures as Zardari and Nawaz Sharif to “lead” us when they are so obviously unable to put together a coherent policy of any sort that can galvanize more than a fraction of their own supporters, never mind any significant minority of Pakistanis. Despite all that, no sensible person wants to undermine the democratic process currently underway in Pakistan because we all know that it is probably the only alternative for the country to muddle along. Hence, most people would be loath to any upheaval that rolls back the process. This is something even the PTI would hate to be perceived as doing. Hence, it is imperative for it to steer clear of the PAT whose leader’s ambitions and grievances are totally personal.

So, we see that almost all the countrymen are sold on the continuity of democracy and would have no trucks with any forces that may want to extinguish it. However, there is another major problem facing the country. The problem is that Nawaz Sharif, once again and for the third time, has made it clear that he is incapable of governing Pakistan. This is the third time he has tried to govern Pakistan the way he rules the Punjab, and he is failing yet again. Some people are just unfit to learn. Nawaz Sharif’s entire governance is rooted in his close family and a few close friends from within a tight geographic and ethnic support base. Major shifts in government policy are thus made by stealth, not only without any involvement of Parliament, but without any notice whatsoever.

Quite simply, if the past three months have shown anything it is that Nawaz Sharif is not fit to govern Pakistan. And, to me, that is the biggest dilemma faced by Pakistan at this point in time. In truth, overall, Nawaz Sharif’s governments have been no better or worse than others that have preceded or followed him in this hapless country. But I have to admit, I have never before witnessed the kind of self-destruction behaviour on the part of a Pakistani government as I have of the Nawaz regime every time it has got the strike. Contemptuous of opposing views, ready to vilify opponents at every turn, the regime has taken even me, a hardened cynic, by surprise in its latest incarnation. To say that this small coterie’s ruling psyche sees enemies everywhere is so obvious. While he must be drunk on some special lassi brewed in Saudi Arabia, what is particularly disappointing is that Nawaz Sharif has learnt nothing in nine years in political wilderness begging some serious introspection. Nothing has changed – he and his amanuenses like Ishaq Dar have no convincing plan for Pakistan. He hates openness; he hates debate and discussion; and he hates real democracy. Nawaz is no Prime Minister, above all, for being such an ineffective communicator and negotiator of the aspirations of ordinary Pakistanis, in a position that demands the very best the country has to offer. These people are a bad joke. They have proven, thrice now: that the moment they take control of the government in Islamabad they promptly muck it up. They are proven, beyond a shadow of doubt, to be unfit to govern.

However, the greatest dilemma Pakistan faces is that its only realistic hope still lies in the present government to be able to complete its tenure with some modicum of decency. While slaying democracy will be an unmitigated disaster, it is clear that the upheaval of yet another election will further project Pakistan into a maelstrom of uncertainty. However, some of their rabidly offensive cohorts -like Khawaja Asif, Pervez Rashid, and Saad Rafiq- need to be shuffled off the stage forever.

No government can be able to do a miracle in the present day Pakistan. All we need the government to do is to bring forth honest dialogue and commitment about one or two issues that could galvanize Pakistanis to solve at least one major problem during the reign.