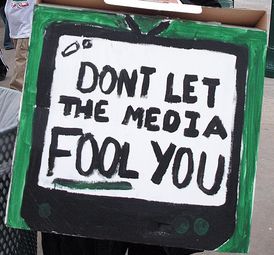 In Nasim Zehra’s August 9th segment of Hum Sub (Part 2), Hamid Mir made the horrendous and utterly dishonest comparison between Lal Masjid’s heavily armed terrorists and Dr Tahir ul Qadri’s peaceful protest against the PML-N government. As per Hamid Mir, the highly armed, Saudi-backed vigilante Deobandi terrorists of Islamabad’s Lal Masjid were comparable to the Pakistan Awami Tehreek (PAT) workers of Tahir ul Qadri. While Tahir ul Qadri has issued a voluminous fatwa against suicide bombing by TTP, Al Qaeda and other takfiri terrorists, Hamid Mir’s Deobandi friends of Lal Masjid threatened and then carried out their threats with a series of suicide bombings against the innocent civilians and soldiers of Pakistan claiming thousands of lives. Refer to the 32 minute mark onwards to 36:00 onwards of Nasim Zehra’s show (http://www.awaztoday.tv/News-Talk-Shows/63062/Hum-Sub-Part-2-9th-August-2014.aspx) where Hamid Mir makes this odious comparison. He first subtly refers to some alleged conversation with some unnamed politicians where he makes the dangerous obfuscation that Tahir ul Qadri is challenging “the writ of the State” and how those who challenge the “writ of the State” are “bombed” to bits. In this instance too, Hamid Mir equates the struggle of the Baloch nationalists with the Takfiri terrorism of the Deobandi Taliban for whom he has often shown a soft corner. This is Hamid Mir’s usual tactic, i.e., to appropriate and misused Baloch secular struggle to rationalize and justify TTP-ASWJ’s Deobandi terrorism. In a previous instance, in a much shared video (www.youtube.com/watch?v=dOgSNYZFfZw), Hamid Mir while rightfully criticizing Pakistan army’s brutal crackdown on Baloch nationalists, then chided the same army for not fighting the US Navy Seal team when they came for Osama Bin Laden in Abbottabad. As per Hamid Mir’s sick mind, Osama Bin Laden and the Taliban are comparable to the struggle of the Baloch nationalists. In this way, he is actually delegitimizing the entire Baloch secular and nationalist movement. The same Hamid Mir now wants his beloved PML-N patrons to continue their pogrom against the Sunni Sufi and Barelvi workers of Pakistan Awami Tehrik! Hamid Mir is the epitome of the double standards of Pakistan’s so-called independent media, he himself first goaded General Musharaf into launching a much needed operations against the highly armed criminals seeking refuge inside Lal Masjid. Later the same pro Taliban mouthpieces like Hamid Mir used the aftermath of the botched operation to support and justify terrorism by the Taliban against his own countrymen!

Just weeks ago, dozens of Pakistan Awami Tehrik activists (Sunni Sufis) were brutally attacked by the Punjab police who are under the tight jurisdiction of Punjab Chief Minister Shahbaz Sharif. Dozens were wounded and killed included women who were shot at point blank range and dragged out of the offices of the Minhaj ul Quran by their hair. This pogrom included not just the police but the career thugs of PML N like Gullu Butt as well as the Deobandi ASWJ-LeJ terrorists. On this massacre in Model Town, pro Taliban and Pro Osama Bin Laden mouthpieces like Hamid Mir have not said much unlike their incitement to hatred and violence in the aftermath of the Lal Masjid operation. After Hamid Mir made the odious comparison between the Deobandi terrorists of Lal Masjid and the Sunni Sufi Barelvi protestors of Minhaj ul Quran, he went further and tried to justify future violence against them. When he finally got his turn to speak, Ayaz Mir rightfully called out Hamid Mir on this typical intellectual fraud but he could not get far as Hamid Mir distastefully interjected and started making personal attacks against Ayaz Amir. Ayaz never got to make his point as the clearly biased anchor, Nasim Zehra, just pulled the plug. This is yet another instance of how certain Nawaz-Yafta (fake) liberals collude with Deobandi right-wingers to promote Saudi-Salafi-Deobandi agenda in Pakistan. Indeed, this is yet another example where a combination of a thinly disguised Deobandi Taliban bias and a right-wing urban bourgeoisie PML N tilt have stifled free debate. As a General Zia ul Haq protégé and establishment lapdog, Nawaz Sharif and his family have been allowed to dominate the politics of the Punjab for the last 4 decades without any accountability. During that time, and especially after the ISI and General Kiyani sponsoring of the Lawyer’s movement, large sections of the media and judiciary are clearly Pro Taliban and pro Deobandi in their outlook. Even the pseudo liberal English Media is not free from this bias as well as the financial influence of the Nawaz Sharif corporate empire.