Dress the Gaza situation up all you like, but the truth hurts – by Robert Fisk 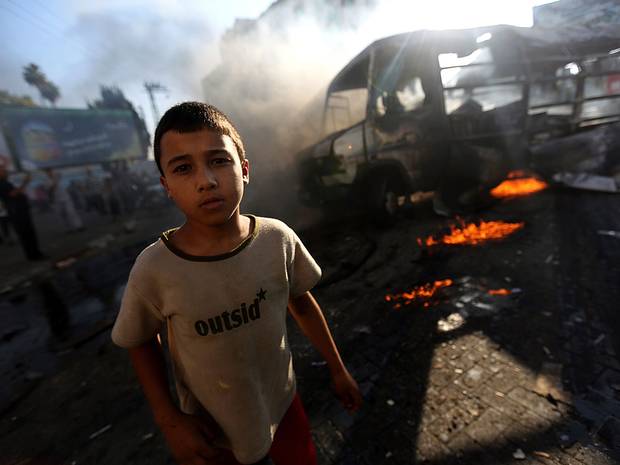 There was a time when our politicians and media had one principal fear when covering Middle East wars: that no one should ever call them anti-Semitic.

So corrosive, so vicious was this charge against any honest critic of Israel that merely to bleat the word “disproportionate” – as in any normal wartime exchange rate of Arab-to-Israeli deaths – was to provoke charges of Nazism by Israel’s would-be supporters. Sympathy for Palestinians would earn the sobriquet “pro-Palestinian”, which, of course, means “pro-terrorist”.

Or so it was until the latest bloodbath in Gaza, which is being so graphically covered by journalists that our masters and our media are suffering a new experience: not fear of being called anti-Semitic, but fear of their own television viewers and readers – ordinary folk so outraged by the war crimes committed against the women and children of Gaza that they are demanding to know why, even now, television moguls and politicians are refusing to treat their own people like moral, decent, intelligent human beings.

Yet still – every time another blood-soaked child appears on the screen – the news presenters talk about the “blame game”. BLAME GAME? Do they think this is a bloody football match? Or a bloody tragedy? It goes like this. Civilians are killed. Reporters call it “tank fire”. (Hamas has no tanks.) Israel says it is a misfired Hamas rocket. Hamas says it is Israel’s work. So it’s a “blame game”. No one can actually BE blamed – and thus we can shrug off the responsibility and shake our head at it all.

And we must forget we did the same when US bombs killed civilians in Tripoli in 1986 (a “misfired Libyan anti-aircraft missile”, I recall, was to blame) or when the Nato attack on the Shuala district of Baghdad killed civilians in 2003 (a “misfired Iraqi anti-aircraft missile” was to blame, of course). Several Americans have called me to point this out, adding that the US Senate vote of 100-0 in favour of Israel sounds a bit like the 98 per cent that Arab dictators claim for their presidency – except that the US vote, which does not represent them, really was the true figure!

Now to the get-out clause of all of us. Yes, Hamas is corrupt, cynical, ruthless. Most of its “spokesmen” are so stupid, so incoherent, so prone to bawling abuse at the top of their voices, that they far outdo the ever-so-gentle Mark Regev in turning the world against Hamas. But the world is turning against Israel, as EU ministers repeatedly (though ever so gently) tell the Israelis. And it’s turning against our politicians and media masters who go on insulting them.

How many times does The New York Times expect its readers to tolerate editorials like last week’s pusillanimous effort? There had been “deadly attacks” in Gaza, readers were told. The total dead came to 750, “a vast majority being Palestinians”. And then the get-out: there were “competing charges” – Israel or Hamas or a Hamas ally – over the attack, and thus “what really matters now is that some way be found to stop this carnage”. So that’s OK, then. “Blame game” equals “no blame”.

In France, there’s been derision at the way the government has reacted to Gaza’s calvary. François Hollande wanted Israel to “correct” its aim “a bit” (un peu)! He criticised Hamas’s aggression and Israel’s reprisals. But then an angry Benjamin Netanyahu came on the blower to the Elysée. Change of tune. Hollande uttered the usual mantra. “Israel has the right to take all measures to protect its people.” But then French Assembly members became so sickened by the “collective punishment” of the Palestinians that Hollande urged an end to the “escalation” in violence. Phew.

In Ireland, traditionally pro-Palestinian, The Irish Times, alas, has been playing the same tune as its New York namesake. On the day after Israel bombed a UN school, killing 19 civilians, it ran a front-page article which began with Israel’s declaration of a ceasefire, continued with a paragraph of the truce details, then ran a paragraph that Hamas had no reaction – and then told its readers about the 19 dead. A reader castigated the paper for “balancing” its letters page with correspondence designed to make the Palestinians look as guilty as the Israelis. “Such disinterest is really a kind of moral apathy,” he said. And said it rather well. The world can at least thank the journos in Gaza – even if their bosses are still on the run.

63 responses to “Dress the Gaza situation up all you like, but the truth hurts – by Robert Fisk”