We are posting tweets from opinion leaders in the Arab world including Elijah J Magnier and Hala Jaber. We have also included some tweets form known ISIS accounts that project their view.  It is clear from their tweets that ISIS rejects political Islam of the Muslim Brotherhood or Iran type which has some elements of democracy. ISIS seeks annihilation of all those who are not pro Caliphate. ISIS also rejects all the Gulf Monarchies. In short this is a group seeking extermination of everyone except them.

This is the epitome of the Khawariji Salafi Wahhabi Deobandi thinking. Eliminate everyone. 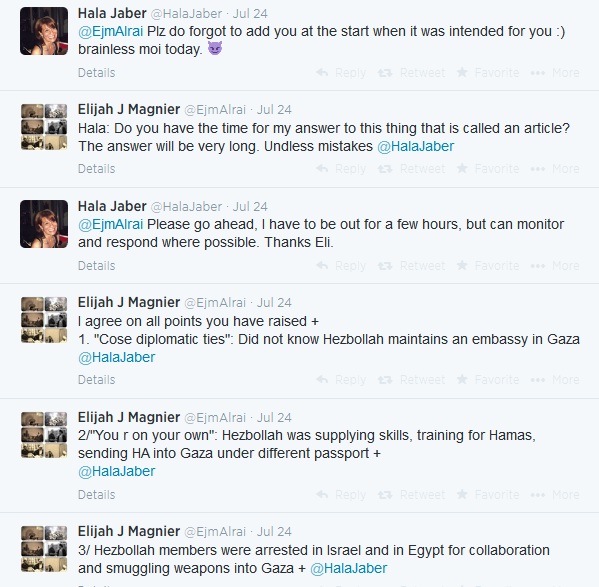 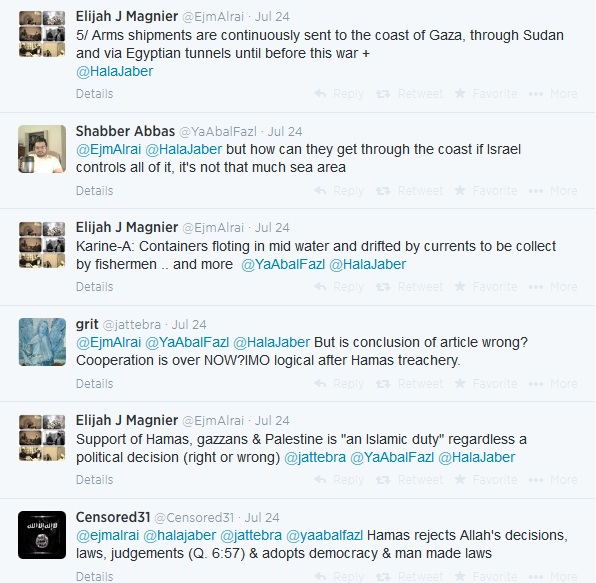 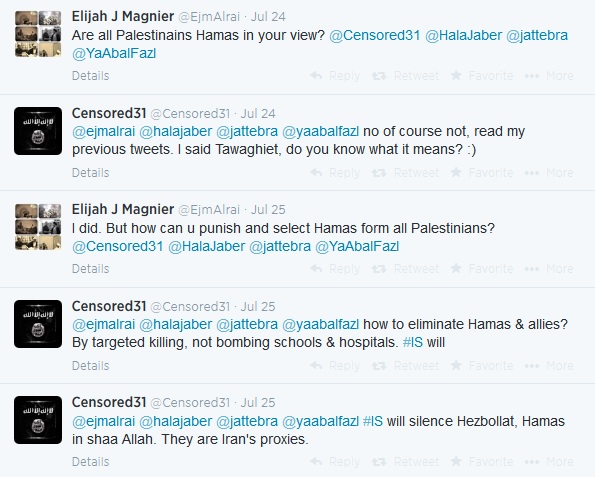 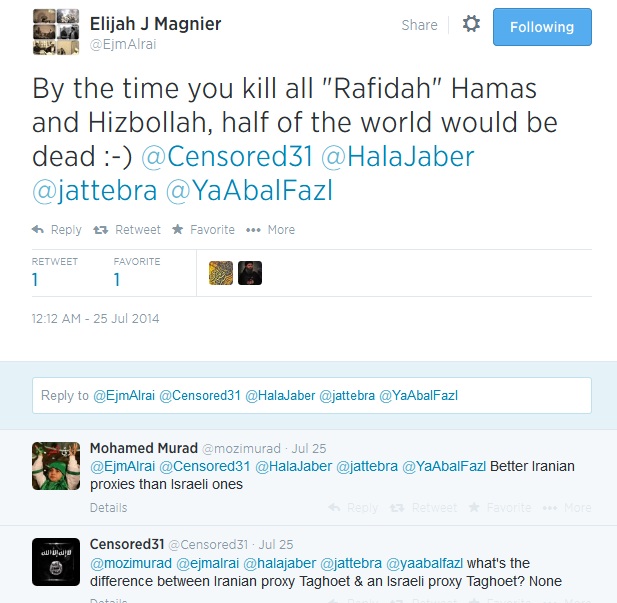 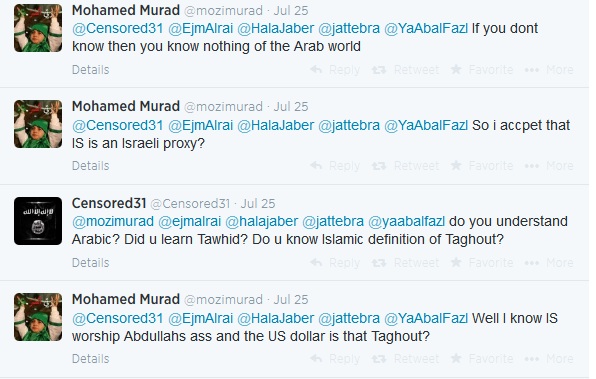 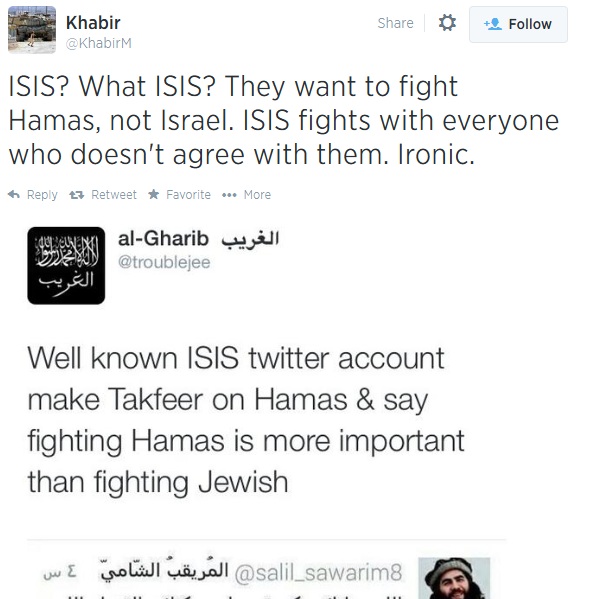 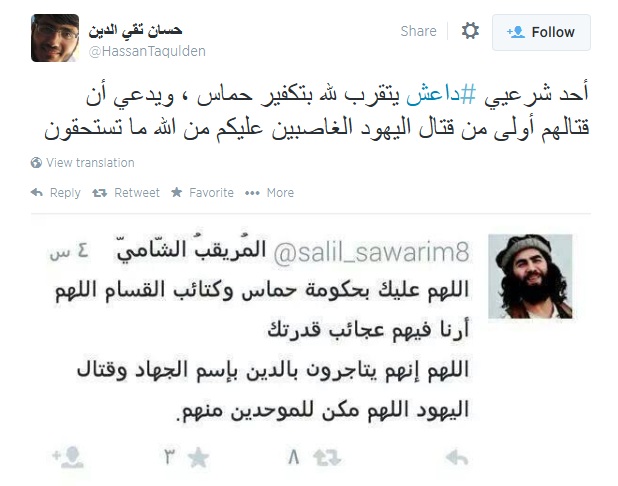 A new Palestinian jihadist group pledging allegiance to the Islamic State (formerly known as ISIL) has claimed responsibility for the killing of three Israeli teenagers last month in the West Bank, as well as other recent deadly attacks against Israeli soldiers and civilians.

Efraim Halevy says that Islamic militants ISIS are already involved in Gaza; Israel and Hamas have been negotiating for years and should do so again.

There are worse options than Hamas,” former Mossad head Efraim Halevy said in an interview with CNN’s Christiane Amanpour on Tuesday.

Halevy added that Israel should negotiate with Hamas, saying that while it was “inconvenient politically” for Israel and Hamas to acknowledge that they negotiate with each other, in reality they have been doing it for years.“We have coined a new method of diplomacy in the twenty-first century: we don’t meet with them, we don’t talk to them, but we listen to them,” Halevy said. “Each one listens to the other side. Somehow in the end an understanding is crafted.”“We have had several rounds with Hamas in recent years, and the previous rounds ended up in agreements … arrangements, as it was called. But in effect it was a negotiation between us and Hamas. When you had the deal on the kidnapped soldier Shalit, we negotiated with Hamas.”While acknowledging that “Hamas is a very bad option,” Halevy said that the Islamic militants in Iraq and Syria were a lot worse.“And we already know what some of them might be, especially one of them: ISIS – which is operating now in northern and central Iraq – has its tentacles in the Gaza Strip too.”ISIS, Halevy said, was recruiting in Gaza, just as it was recruiting in Europe.The former Mossad chief said that he did not “detect for the moment any great appetite on the part of the prime minister to go, at least in the immediate future, into anything beyond air attacks and maybe here or there a ground skirmish.”Netanyahu, he added, “wants to lead Hamas into a position where they will accept the cease-fire,” leaving a “cowed Hamas, a weakened Hamas” in power in Gaza.“Israel has no appetite to take over responsibility for the population in Gaza,” he said.

A new Palestinian jihadist group pledging allegiance to the Islamic State (formerly known as ISIL) has claimed responsibility for the killing of three Israeli teenagers last month in the West Bank, as well as other recent deadly attacks against Israeli soldiers and civilians.

In a statement posted on jihadi websites Tuesday, the Supporters of the Islamic State in Bayt al-Maqdis said it was behind the capture and killing of “the three soldiers” in Hebron (actually, it was in the nearby Etzion bloc), sniper attacks in Hebron and Tarqumia, and missile launches from Gaza into Israel a month and a half ago.

“We are not a partisan group like the humiliated organizations, many of whose leaders sold their religion for the benefit of politics,” the communique read, in a critique of both Fatah and Hamas.

“They have entered polytheistic parliaments and allied themselves with heathens and Shiite leaders, transferring their preaching and religion to the West Bank and Gaza, God help us.”

Aaron Zelin, a Richard Borow Fellow at the Washington Institute and expert on global jihadist organizations, said he knew nothing of the group.

“It is difficult to assess whether it’s legitimate,” he said.

Israel’s two prime suspects in the killing – Marwan Kawasme, 29, and Amar Abu Aysha, 32 — are both member of Hamas activists in Hebron.

The jihadist statement threatened both Israel and Palestinian Authority leaders with death and destruction.

“Our message to the Jews in Bayt al-Maqdis [the Islamic term for Jerusalem] and its environs: by occupying the land of the Muslims in Palestine … you have opened a door that cannot be shut unless you leave [the land] humiliated … or [are] killed, the way you found the putrid bodies of your three soldiers. We carry in our pockets black days for you.

“To the leadership of the heretic [Palestinian] Authority: We have surprises for you that will shake your thrones and end your aggression against Muslims in the West Bank and Gaza. You have killed us and and rebelled against God … wait for us, we will come to slaughter and kill you. We shall not fail the oppressed Muslims until we free every believer from your prisons.”

An unknown group named Hezbollah Brigades also claimed responsibility for the abduction last month, saying it was retribution for the 2008 assassination of Hezbollah leader Imad Mughniyeh.