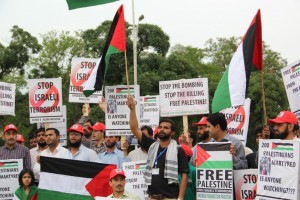 A national security state, carved out in a British colony on the basis of a people’s religious identity following the culmination of World War 2, thanks to a 20th century ideological movement led by an apparently secular man, who had to deal with the clergy’s opposition to the creation of the state that has since relied on the US, its military and nukes for survival amidst constant insecurity and paranoia. Pakistan or Israel? We’ll let you decide.

The similarities between Israel and Pakistan have been touched on by many a commentator. There, of course, are glaring differences as well, most notably in the respective paths that the two states have traversed since their inception. The parallels make for an intriguing study when one juxtaposes them with the ongoing Israeli-Palestinian conflict and the overwhelming interest of the Pakistanis.

When the lion’s share of the Pakistanis do not condemn global Islamist killings, most notably in Iraq and Syria, and virtually everyone remains shushed about the ongoing genocide against the Shia Muslims – one-fifth of Pakistan’s population – and the ethnic cleansing of the Baloch in the country’s largest province, but all hell breaks loose when people in Gaza die, obviously the outrage isn’t just about Muslims being killed. When ‘honour killings’, LGBTQ abuse and the barefaced apartheid against the ‘officially’ excommunicated Ahmaddiya Muslim sect are actually justified by the Pakistanis, condemning IDF’s aggression and Israeli settlements isn’t obviously about human rights. We’re just furious that it’s Jews killing Muslims.

The double standards are even more conspicuous when one considers that unlike Islamist terrorism, Israeli aggression isn’t indiscriminate butchery. And this is where the Israel-Pakistan parallels come into the picture.

Almost all of the Pakistanis that are castigating Israeli state’s action in Gaza are cheering on their military’s ongoing operation in North Waziristan, which has left a million people homeless. Putting the efficiency of the respective military operations aside, both the Israeli and the Pakistani forces are trying to protect their states from militant attacks from Hamas and the TTP respectively. Apart from the anti-Semitism, a Muslim-centric version of both domestic and global history that is spoon fed to us since birth, and the fact that Israel has intermittently occupied more land since 1948, the obvious distinction between the two is that Pakistanis acknowledge only one of the two state’s right to exist. This is despite the uncanny commonalities between the creation of Pakistan and its Jewish doppelganger.

“So how would you feel if an outsider barges inside your house and takes over?” is often an inaccurately analogous question posed to condemn Israel’s creation that doesn’t do any justice to the complexity of the crisis and completely ignores the Arabs’ contribution to the issue’s exacerbation. And when it’s the Pakistanis who use this argument, after the creation of their country resulted in more ‘barging inside houses’ than any other event in the history of mankind, it obviously reeks of hypocrisy.

That there is a multitude of similarities between Pakistani and Israeli inceptions, quite often depicting prodigiously larger scale of suffering in the former’s creation, means that Pakistanis questioning Israel’s existence quite often slash question marks over the raison d’etre of their own state. For no other state’s creation has resulted in a bigger mass migration than Pakistan’s. Around 700,000 Palestinians were displaced owing to Israel’s creation while Pakistan’s creation, as United India divided into India and Pakistan, left 20 times more people homeless – around 14 million, 7 million on either side. Pakistan’s creation led to around half a million deaths compared to the 25,000 that died in the immediate aftermath of Israel’s inception. Not to mention the fact that former president of Pakistan General Ziaul Haq supervised over the Black September operation in 1970 that led to the massacre of around 25,000 Palestinians in Jordon.

If we are going by the argument that Israel ‘belongs’ to Palestinians, then by the same logic Pakistan would ‘belong’ to Indians. Both India and Palestine were under the British rule at the time of their partitions, and while there had been a sovereign entity called India before it became a British colony, there had never been a sovereign Palestine in human history, with the term only being used as a geographical expression. From the Ancient Egyptians’ rule to the Ottoman Empire before the British, Palestine had never been an independent entity.

The counterargument presented is that the Hindus and Muslims were ‘already living there for centuries’, while the Jews were ‘shipped’ into Palestine from another continent. Unfortunately the Hindus and Sikhs that had to migrate to India, and the Muslims that had to migrate to Pakistan and modern day Bangladesh, hadn’t already been ‘living there for centuries’. Are the kilometres involved the only reason that migration from Warsaw to Tel Aviv is unfair, while one from Amritsar to Lahore is alright?

Another counterargument is that the ‘European Jews’ weren’t the same people as the Palestinian Arabs, while the Indians and Pakistanis were one people. Ignoring the fact that both the Israelis and Palestinians share common hereditary roots, a lot of Arab and Central Asian invaders and every single proponent of the Pakistan movement would beg to disagree with the Indian Muslims and Hindus being peddled as the same people. The much touted Two-Nation theory was propagated, among others, by Pakistan’s founding father Muhammad Ali Jinnah who is on record as saying that the Hindus and Muslims had “nothing that linked them together”, and spent the entire decade leading up to Pakistan’s independence in 1947 highlighting the differences between the two religious communities. This has resulted in the majority of the Pakistanis considering themselves to be the direct descendents of the Arabs who invaded India. And hence, as they vociferously call for a Jewish exodus from Palestine, maybe they should consider moving back to Central Asia or the Arabian Peninsula.

The city of Jerusalem has been usurped 44 times in the past four millennia by the followers of the three Abrahamic religions and the use of the argument by both sides that the land actually ‘belongs’ to them is one of the major reasons why the Israeli-Palestinian conflict has become a never ending debate. This is precisely why none of the partition offers – from the 85% in 1937 (Peel Commission) to the 22% in 2001 – has been acceptable to the Arabs, because of their sense of entitlement over the entire Palestinian land.

1946’s Anglo-American Committee of Inquiry had been designed to plan out a power sharing strategy once the British mandate expires in Palestine much like the Cabinet Mission Plan of the same year in India. Both the Committee of Inquiry and the Cabinet Mission vied to ensure that post British withdrawal neither of the two communities dominates over the other. This eventually led to the respective partition proposals, and while the Indians agreed to the creation of Pakistan – with both sides feeling hard done by – the Arabs vehemently opposed Israel’s inception, as the Arab military coalition invaded the Jewish state the very next day after its creation.

It’s important to realise that people all over the world had to suffer the consequences of the Second World War, the global reshuffle and carving out of new boundaries, not just the Palestinians. Let’s not forget that while Pakistanis are touting casualties owing to Hamas’ open use of human shields as ‘genocide’, there is systematic ethnic cleansing of the Shia and the Baloch going on in Pakistan. And as we pray for those suffering the wrath of IDF’s military operation, there are a million IDPs awaiting our support in North Waziristan.

None of this is to belittle the suffering of the Palestinians in the 1940s, or as things stand, but to highlight the collective hypocrisy of Pakistanis as we ignore both our present and our past while manifesting our anti-Israel venom. Just because time has relatively healed the scars of the Indian partition, and people have moved on, does not mean that it was any less painful for the sufferers than the Palestinian partition as that region continues to live in the 1940s. And just because our heart aches seeing Palestinian blood, does not mean that it should go numb when we witness Muslims eradicating other Muslims over sectarian differences.

The writer is a Pakistan-based journalist. Email: khulduneshahid@gmail.com; Twitter: @khuldune