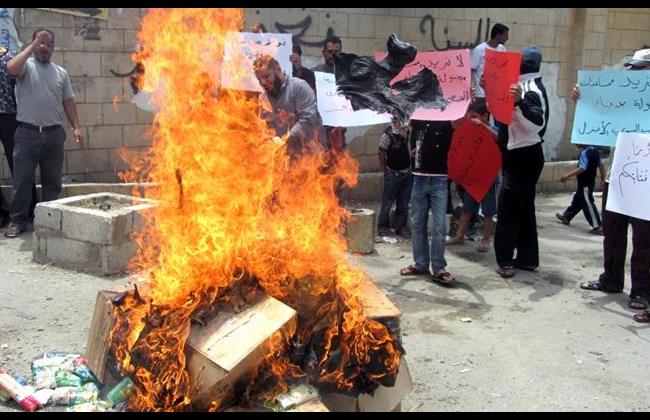 Editor’s note: Palestinians, once again, refuse/reject and burn the aid sent under sectarian grounds. Maybe Iran can stop sending millions funding Salafi terrorists of Hamas and instead help Shias suffering in Iraq and Pakistan. They are not worthless, and their blood is equally special.

A number of refugees gathered in front of the Kifah School in the camp and held banners explaining their decision to burn the boxes of aid, which Hezbollah is distributing in a number of Palestinian refugee camps in Lebanon.

“We don’t want assistance soaked in the blood of the Syrian people,” read one of the signs.

The Palestinian Hamas party that governs the Gaza Strip has broken with President Bashar Assad’s government in the wake of the uprising.

Affixed to the boxes were labels reading: “A gift from the Islamic resistance in Lebanon to our Palestinian and Syrian refugee families.”

Tensions in the south Lebanon camp rose earlier in the week when Palestinians who had fled the fighting in Syria objected to seeing Hezbollah and Syrian regime flags on the trucks being used to deliver the aid. Two armed men on motorcycles responded by blocking the route of the vehicles.

The camp’s Popular Committees then decided to accept the donations and store them in a warehouse for distribution at a later date, to avoid tension.

However, at least one attempt was made to burn the boxes in the warehouse, prompting their removal to a second location for storage.

The offended refugees finally got hold of the aid when distribution began Thursday.

In Baalbek’s Al-Jalil Palestinian refugee camp, a ceremony was held to thank the party’s initiative, which included the distribution of 1,800 food packets.

SAADNAYEL, Lebanon: Some 1,500 packages of food aid donated by Hezbollah were burned by Palestinian refugees from Syria and local residents in the Bekaa Wednesday, the second such incident in a week. Omar Halabi, the head of the Saadnayel Youth League, told The Daily Star that a truck with boxes of aid was unloaded in the morning at the offices of the Democratic Front for the Liberation of Palestine.

Halabi said when the aid was distributed, the refugees noticed the labels attached to each package explaining that the aid was a gift from the “Islamic Resistance in Lebanon to our brethren, the displaced Palestinians from Syria.”

“When the refugees realized that the aid was from the same party which is killing their people in Qusair and in other places, they, with dozens of locals, took the boxes from the Palestinian Cultural Center and burned them,” Halabi said.

The DFLP is politically affiliated with the Syrian regime, and its leader, Nayef Hawatmeh, lives in Syria.

In February he was wounded after a bomb exploded in the Syrian capital of Damascus.

Hamas, which governs the Gaza Strip, switched allegiances and broke off with President Bashar Assad’s government in the wake of the uprisings.

Last Thursday, Palestinian refugees from Syria set fire to humanitarian aid donated by Hezbollah in the Ain al-Hilweh refugee camp, citing their anger over the party’s role fighting alongside the Syrian regime.

Refugees gathered in front of the camp’s Kifah School holding banners explaining their decision to destroy the aid, which the party is distributing across a number of Palestinian refugee camps in Lebanon.