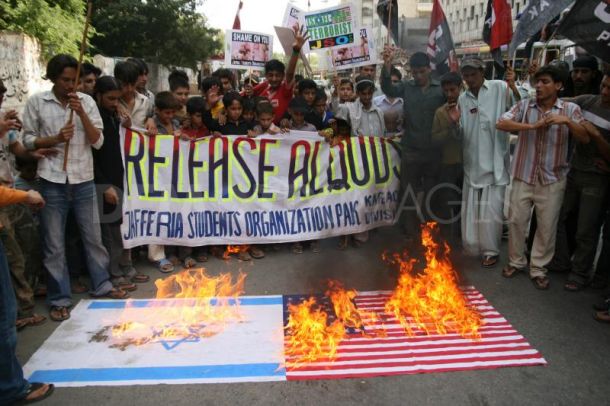 A few Pakistani (and other) Shia blind followers of Iranian Ayatollahs who claim that they support Hamas and Palestinians based on principles (justice, resistance to oppression etc) must answer this:

Why are they silent when China bans fasting for its Muslim population in Xinjiang? Why no MWM, TJP, ISO demonstrations in support of the oppressed Uighur Muslims? Any demonstrations against China by Hezbollah or Mahdi Army? http://www.bbc.co.uk/news/world-asia-china-28123267

Currently (July 2014), thousands of Shias in Pakistan, Lebanon and Iraq are demonstrating in support of Hamas. But why no Shia demonstrations in support of the oppressed and persecuted Chechen Muslims of Russia? http://www.bbc.co.uk/news/world-europe-23325956

(By the way, where has the Marg Bar Shouravi (Murda Baad Roosia) slogan disappeared? Why do Pakistani Shias have to blindly follow Tehran’s political agenda?)

Why no demonstrations against Hamas when it indiscriminately attacks Israeli civilians through suicide attacks and rockets? Are human rights reserved for Muslims only?

Why no demonstrations when Hamas militants attack Shia Ashura gatherings in Palestine, and help Al-Nusra and ISIS in the slaughter of innocnt Sunni Sufis, Shias and Christians in Syria and Iraq? Why silence?

And last but not least, why are Pakistani, Iranian, Iraqi and Lebanese Shias mute over recent brutal massacre of 29 alleged sex workers in Baghdad, allegedly by Shia militia? Do sex workers have no human rights? http://www.thedailybeast.com/articles/2014/07/15/who-s-butchering-baghdad-s-prostitutes.html

Clearly, these Pakistani and other Shia proxies of Tehran, not unlike USA and UK, are very selective in their causes of human rights and justice. (USA and UK’s hypocrisy is evident in Bahrain, Syria and Iraq, for example.)

In the meanwhile, they continue to spew venom against Ahmadis, Jews, Sunnis and Christians in their secret Shia social media groups, and then expect us to not confront and expose their hypocrisy!

True children of Muawiya, they are, not the Shias of Ali.

Appendix: An example of the Iran-centric Shias’ double standards 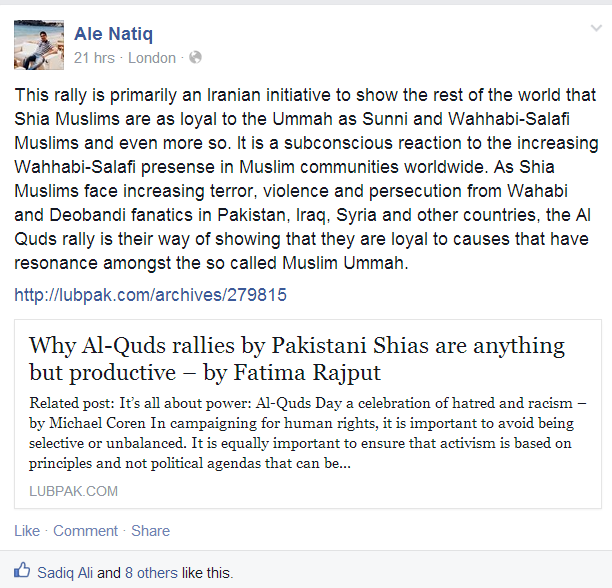 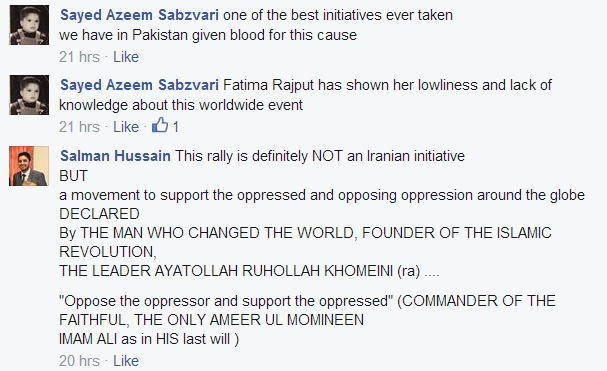 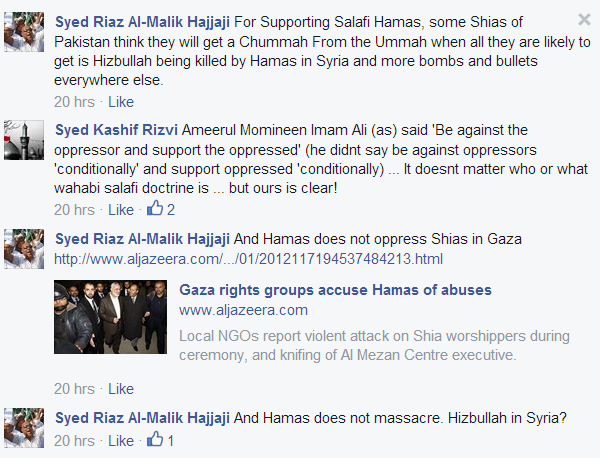 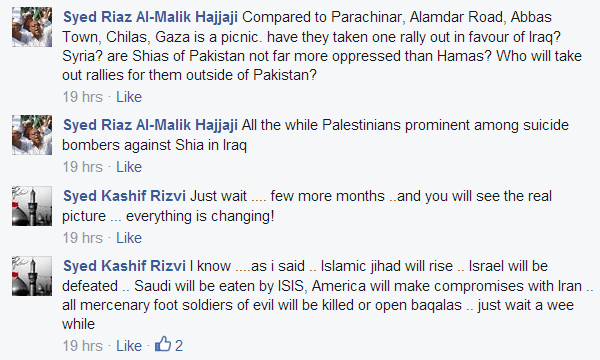 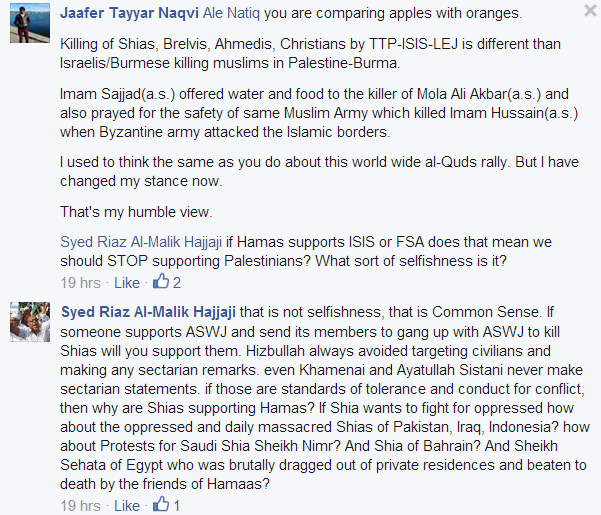 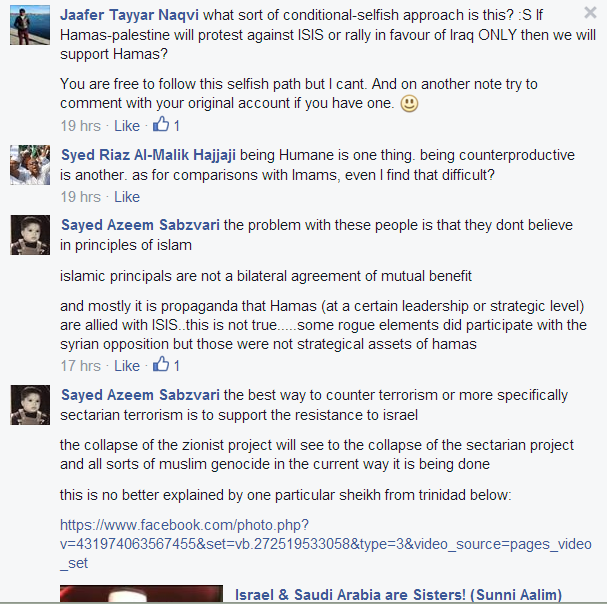 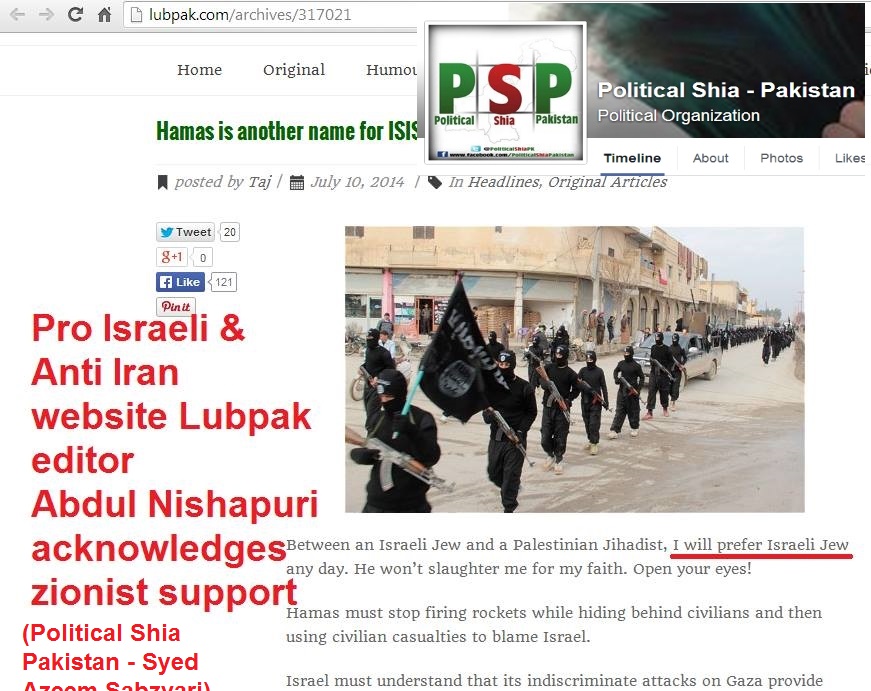