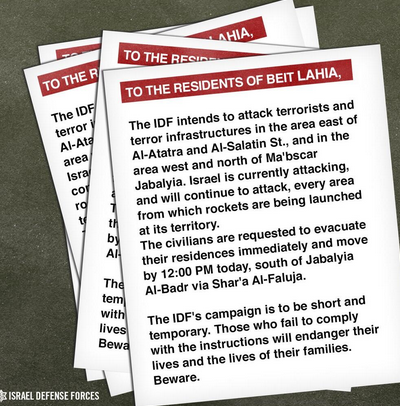 According to media and other direct reports from Gaza, Israeli army often gives clear warnings (date, time, area) to Gaza civilians to evacuate clearly identified areas. Simultaneously, Israel phones independent civilians asking them to leave their home within a minute or two before bombing their house. Here’s one such example:

“IDF officer called: Leave now, I’ll be on line until you are out of you house. Once out, I confirmed. He hang up. One minute later,I have lost my house”. — (reported by Elijah J. Magnier)

Leaflets are being dropped by the IDF on designated areas. A knock on the roof warning system (1 minute warning at least) is also in place.

While the above protocol may not be sufficient and offers no justification for collective punishment of Palestinian families and communities in reprisal of violence by Hamas militants (who often use innocent Palestinians as human shields while firing rockets at Israel civilians), this does remind me of the never-ending, random suicide attacks and target killings of Sunni Sufis/Barelvis, Shias and Christians by Deobandi terrorists in Pakistan. Ditto for Salafi Wahhabi crimes against Sunnis, Shias and Christians in Iraq, Syria, Libya, Nigeria and elsewhere. Seen from a takfiri Salafi and Deobandi angle, Israeli attacks on Gaza appear to be very mild and humane. Imagine what would ISIS, Hamas or ASWJ-LeJ do to Israel, Jews, Shias, Sunni Sufis and Christians if they (takfiris) had the latest weapons and technology in their access!

In the meanwhile, thousands of Jews in New York (USA) walk in support of Palestinians  (see pictures in this post). Have you ever seen thousands of “moderate Deobandis” or “moderate Salafis” protesting against Shia genocide and Sunni Sufi genocide by takfiri Deobandi and Salafi Kahwarij? Any protest by moderate Sunnis against the destruction of churches, Sufi shrines and Shia mosques by the Caliph Abu Bakr Al-Baghdadi in Iraq? Any protest by any Muslim community against Hamas’s attacks on innocent Israeli civilians?

In the meanwhile, let’s continue to update our facebook and twitter accounts with Hamas’s onesided propaganda. Long live hypocrisy! 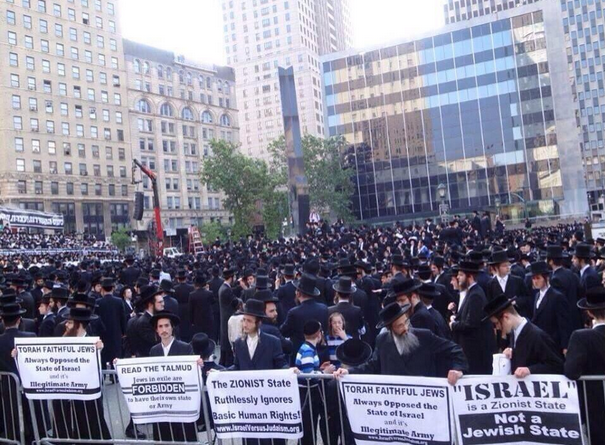 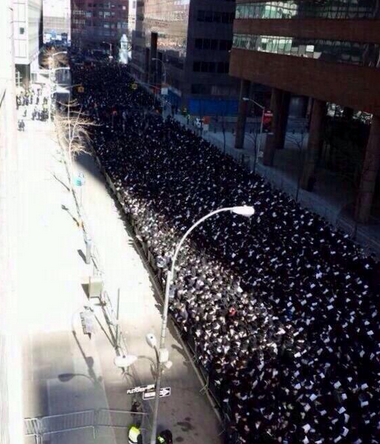