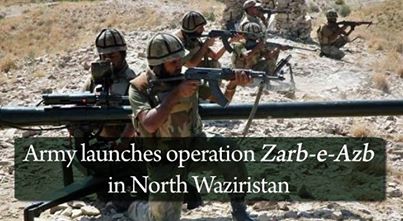 Pakistan army’s Operation Zarb-e-Azb against Deobandi Khawarij in North Waziristan is being selectively criticized not only by right-wing TTP-ASWJ apologists but also by the NGO/thinktank “liberals”.

Any analysis of the military operation in North Waziristan that doesn’t consider the dominant Deobandi dimension of terrorism is flawed and biased.

North Wazirstan was a nerve centre and safe havens for Deobandi TTP-ASWJ terrorists. The Operation has resulted in visible decline in target killings of persecuted communities and other terrorist activities across the country. This aspect is conveniently ignored by many army-bashing “liberals”.

Pakistani “liberals” fond of bashing army/ISI on Deobandi/Salafi Jihadi proxies wipe out the CIA-KSA’s much larger, global role in the Salafi/Deobandi jihad. Why?

One should not absolve those sections of the army that still might harbor sympathies and view these murderers as “Strategic Assets” as was the case with former COAS General (Retd.) Kiyani. In the same vein, one must also neither absolve or forget the role played by Pakistan’s Fake Liberal Intelligentsia for their advocacy of hate mongering Deobandi clerics and their tactics of false neutrality between Deobandi Khawarij murderers and their Sunni Sufi, Shia and Christian vicitims.

Ever since the latest operation, this same brigade of Fake Liberals has continued to mock, jeer and abuse anti-Taliban Sunni clerics like Tahir ul Qadri and making light of the brutal massacre of unarmed PAT activists by the PMLN-ASWJ led police. These same Fake Liberals are oblivious to the fact that after suffering tens of thousands of casualties, Pakistan’s Sunni Barelvis, Shias, Chrisianns and Ahmadis do not want fancy lectures on democracy – they just want to survive.