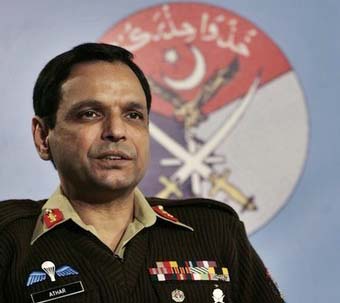 How shameless of Major General (retired) Athar Abbas to critisize his ex boss just months after Gen Kayani retired! He should have waited longer. I hope there are no such backstabbers amongst the judiciary who start slamming their former boss CJP Abu Arsalan aka PCO Iftikhar Chaudhary. Even Babar Sattar waited for the weeks after Abu Arsalan’s retirement before he took some mild but harmless digs.

Instead of defending Taliban in talkshows hosted by anchors as ostensibly diverse as Hamid Mir and Najam Sethi, General Athar Abbas has decided to speak against them, criticizing his own ex-boss on his lack of action against the TTP terrorists. How dared he?

At this time in point, we must appreciate Good Jinnah Liberals aka General Kayani Liberals who are slamming Athar Abbas while remaining mute on the Deobandi Holy Tribe of ASWJ (the urban face of TTP-LeJ) that Kayani wanted to protect.

I love the analogy of comparing General Shahid Aziz with General Athar Abbas. General Shahid Aziz was instrumental in shoring up the coup of General Musharaf before he was sidelined for having a soft corner for the Taliban – kind of like General Kayani. Shahid Aziz claims he was opposed to Musharaf’s adventure in Kargil – a fact he brought up 14 years later and on the alleged motivation that he was sidelined. Athar Abbas is slamming Kayani for not undertaking a vital operation against the Taliban for which he already had the permission from the then Gilani-Zardari government. Athar only waited for a few months to slam his former boss.

Maj Gen Athar Abbas was not even a Corps commander and did not wield the same influence with General Kiyani as opposed to General Shahid Aziz who was one of the very few senior corps commanders without whose support General Musharaf’s coup would not even have been possible. The Sindhi Witch Benazir Bhutto is on record that it was she who had refused the Kargil plan when it was presented to her. No such evidence exists for either General Shahid Aziz or Nawaz Sharif who was probably more interested in the snacks during the meeting when the Kargil plan was presented by Musharraf.

Earlier this year, in a book with explosive revelations, Carlotta Gall had highlighted how subservient General Kayani was to the Deobandi militant organization ASWJ-LeJ and relied on their Vice President, Malik Ishaq to bail him out when the Taliban attacked GHQ.

Even though the case of Shahid Aziz vs Athar Abbas is as different as apples vs oranges or in this apples vs onions, we have to hand it to Good Kayani Liberals for batting for the former Unofficial President of Pakistan. In the meanwhile, the same lot remains mysteriously silent on more than 100 LeJ terrorists released by Najam Sethi during his brief stint as Caretaker CM of Punjab while he was also busy in taking care of 35-puncture in favour of a pro-Taliban party.

This is a tough time for former Civil Society heros like Abu Arsalan and his Protector/Boss General Kayani. We need Good Kayani Liberals to obfuscate the issue and slam anyone who goes against the Deobandi establishment even as we selectively continue to abuse and mock the Anti-Taliban establishment cmoprising of Barelvi Taliban and Shia Iranian establishment.

We must continue to live in the fictional binaries constructed by Good Kayani Liberals who praise the El General El Presidente for not launching a Formal Coup or a proper operation against the Taliban while abusing even the chance/prospect/potential of an actual change in the state policy of supporting the Taliban.

Good Kayani Liberal icons like Abu Arsalan, Nawaz Sharif and General Kayani have done a great service to supporting and strenghtening the Taliban and ASWJ-LeJ in Pakistan and for that, they are always treated with a soft hand by Good Kiyani Jinnah Liberals.

Good Kayani-brand Jinnah Institute Liberals should support Pro Taliban “anti establishment” “elected” Nawaz Sharif blindly, police massacres of Barelvis be damned. Forget the phrase of cutting the nose to spite the face. Pro-Taliban Nawaz Sharif also opposed and delayed the operation as much as his benefactor General Kayani did. For that Good Kayani Liberals must support both the General and the capitalist who quotes Faiz and Jalib too.

The way Kayani has been criticized by his own fellow general, are Pakistani journalists ready to criticize Najam Sethi, for example, the lifetime chairman of PCB? Or the Jinnah Institute, known for enjoying support from anonymous benevolent funders in Islamabad?

Major General (r) Athar Abbas is facing unfair criticism from (a) Deobandi TTP-ASWJ apologists, (2) “liberals” who love to bash army, on any pretext, but remain mute on CIA and Saudi Arabia’s ONGOING dirty role in creating Jihadist monsters worldwide including in Pakistan, Syria and Iraq. 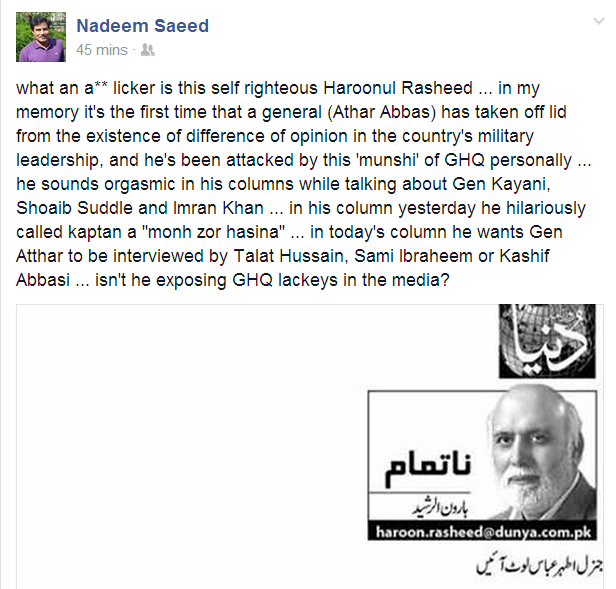