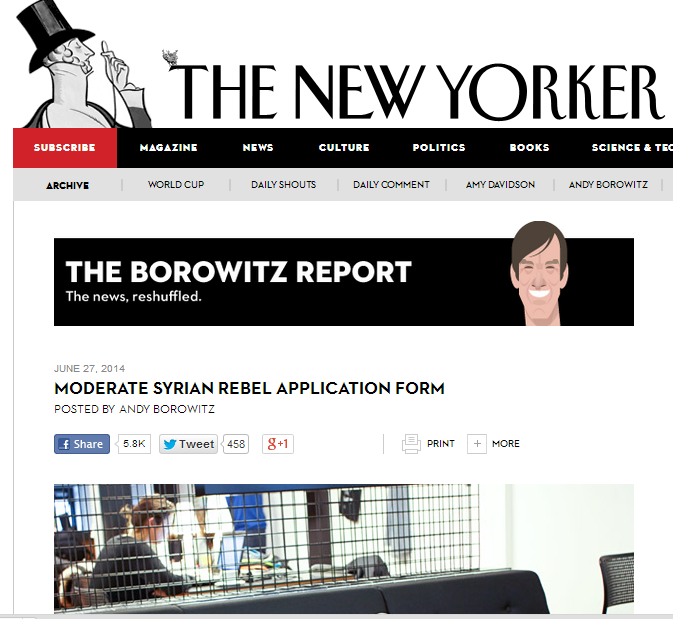 WASHINGTON (The Borowitz Report) — After announcing, on Thursday 26 June 2014, that it would seek $500 million to help “train and equip appropriately vetted elements of the moderate Syrian armed opposition,” the White House today posted the following Moderate Syrian Rebel Application Form:

As a Syrian rebel, I think the word or phrase that best describes me is:
A) Moderate
B) Very moderate
C) Crazy moderate
D) Other

I became a Syrian rebel because I believe in:
A) Truth
B) Justice
C) The American Way
D) Creating a Salafi Wahhabi and Deobandi caliphate

If I were given a highly lethal automatic weapon by the United States, I would:
A) Only kill exactly the people that the United States wanted me to kill i.e. Bashar al-Assad
B) Try to kill the right people, i.e., Shias, Sunni Sufis and Christians.
C) Kill people only after submitting them to a rigorous vetting process
D) Immediately let the weapon fall into the wrong hands

I have previously received weapons from:
A) Al Qaeda
B) The Taliban
C) Saudi Arabia
D) I did not receive weapons from any of them because after they vetted me I was deemed way too moderate

I consider ISIS:
A) A Sunni revolution against Zionist-Shia-Christian trianle of Israel, Syria and Armenia
B) Military wing of Free Syrian Army
C) An existential threat to Iraq and Syria
D) The people who will pick up my American weapon after I drop it and run away

Complete the following sentence. “American weapons are…”
A) Always a good thing to randomly add to any international hot spot
B) Exactly what this raging civil war has been missing for the past three years
C) Best when used moderately
D) Super easy to resell online

Source: Adapted with changes from The New Yorker