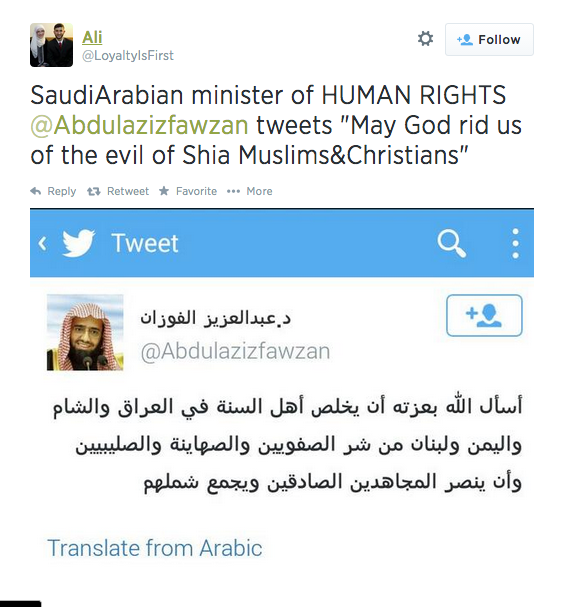 The Saudi Minister of Human Rights is a bigot. He is also someone who wants the world to be rid of Shia’s, Jews and Christians. There are churches that are being burnt down in Iraq by the Saudi funded Isis. Saudi-Arabia can try to deny their link with Isis http://www.thedailybeast.com/articles/2014/06/14/america-s-allies-are-funding-isis.html.

On top of that, the Saudi ideology of Salafi Islam is what is driving the mentality of terrorist groups like Isis. Not all Muslims are terrorists, but all Salafist’s have an ideology that can very easily lead to terrorism. So this really begs the question, why does a group that makes up maybe 10% of the Muslim population have control over the holy lands of Mecca and Medina? Why are they the ones who “own” the graves of Holy Islamic figures…did I say “own?” I really meant destroy, because it’s no secret that the Saudi state has destroyed the graves of people that are holy to every Muslim. How is a state who’s HUMAN RIGHTS MINISTER condones not only getting rid of the 20% of its own population but about 2.3 billion people world wide?

How did this person become a HUMAN RIGHTS MINISTER?
It goes to show what Human Rights actually mean in Saudi Arabia.

Saudi Arabian human rights record is reflected in how King Abdullah imprisons an enslaves his own daughters.

Saudi Arabia is the only country in the world where women cannot drive.