Editor’s note: http://www.nytimes.com/2014/06/07/world/asia/pakistan-facebook-blocked-users-from-political-pages-and-outspoken-rock-band-laal-against-taliban-.html According to this New York Times article, Facebook has been blocking many “left-wing” pages in Pakistan. This fundamentally goes against the principles of free speech. Peaceful Facebook pages are being blocked whereas ones that are pro Taliban continue to go unchecked. One would think that a group of people who are trying to kill aimlessly would be the ones who would be blocked, however, teaming up with the Pro-Taliban government, Facebook has demonstrated its support for the killing of innocent people and support of terrorist organizations by blocking Anti-Taliban groups and letting the Pro-Taliban groups remain. Further pro terrorism approach by Facebook can be seen in this Washington Times article : http://www.washingtontimes.com/news/2014/jun/16/husain-facebook-refuses-take-down-isis-terror-grou/ 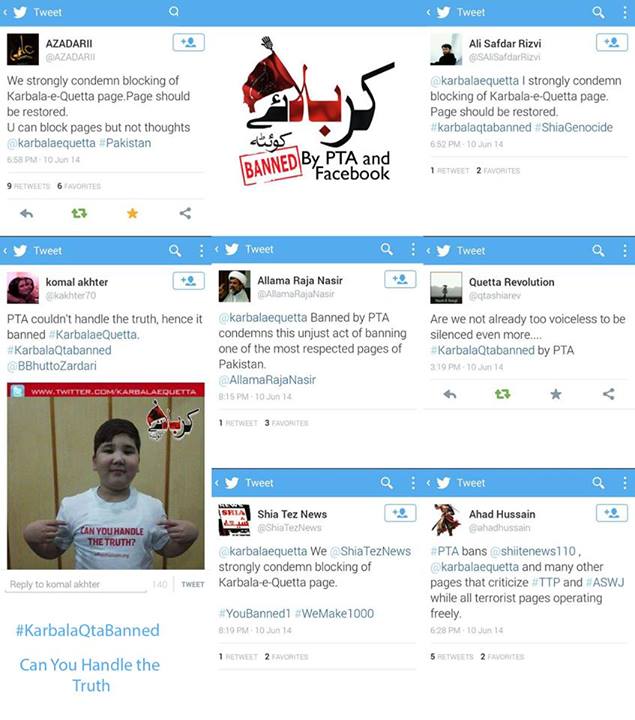 The PTA Recently Defined as “Pakistani Taliban Authority” has been on the rampage for the past few weeks. Liberal and Secular Facebook Pages are getting banned by the authority purposefully to silent the Anti Deobandi Taliban narrative on the the Social Media in Pakistan. Progressive , Secular, and Liberal Pages are not the only victim of this Sinister Campaign by the PTA.

Recently a Shia Hazara Page From Quetta ” Karbala e Quetta ” and Shitte News has been banned by  the PTA in Pakistan. Facebook users living inside Pakistan are denied access to these Pages. 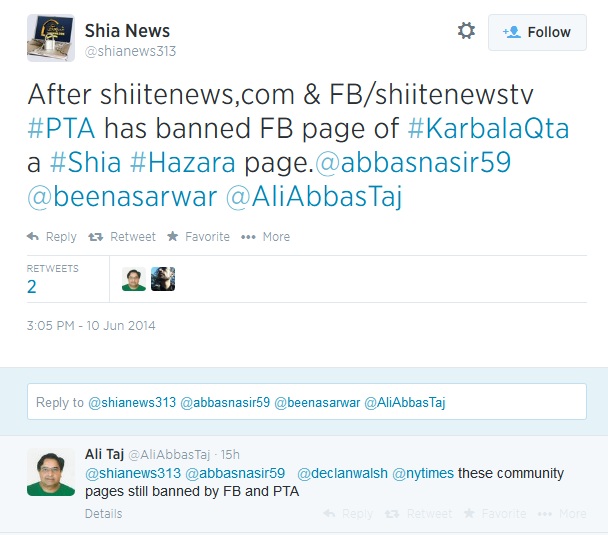 What exactly were these pages doing  except Reporting and sharing news of unabated Shia Genocide Carried out by ”our assets” in Baluchistan, right after the Taftan Attack when the whole media was busy reporting  the Karachi Airport attack and ignored the carnage in Taftan , Karbala e Quetta and Shia News were of the very few Pages reporting authentic news from its sources present in Taftan. Now after 4 days the Pakistani media is yet to come up with the exact figure of the people killed in  the Taftan Attack which targeted a hotel where pilgrims were resting after a long journey, coming back from Iran to their motherland Pakistan just to get killed by their fellow countrymen in the name of the religion of peace.

The government and state is already looking the other way and is not bothered about what their ” Strategic depth ” has done to the country and its people. Shias are getting killed from Karachi to Gilgit Baltistan day in day out and the so called ” Free Media ” has turned a blind eye to that.

We need a few questions answered first before asking why these pages were banned in Pakistan.

Were those pages instigating the most oppressed community of Pakistan to kill anyone?

Were those pages “Anti State” or  Anti Terrorism ?

And is the state terroristic?

Is reporting a genocide a crime in the Land of Pure?

Hazara Shias are the most oppressed and peaceful community of Pakistan and  the state is treating the whole community like step children. Are they committing a crime by not going violent in a country where only in last 10 years more than 1500+ have been slaughtered and 3000+ injured ,30,000 have migrated to  other cities and countries.

Shias And Hazara Shias have only one Question to the State of the Pakistan.

Do they have a right to live?