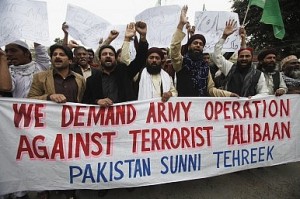 Taliban and like-minded jihadis are becoming more united in their determination to impose their brand of sharia on both Afghanistan and Pakistan, with the help of their international mentors under the banner of al-Qaeda.

While the terrorists are racing ahead with this unity of purpose, the governments of Afghanistan and Pakistan are divided when it comes to tackling the growing extremism. Islamabad is busy pursuing talks, while in Afghanistan “insider attacks’” are on the rise because the Taliban have managed to get members recruited by the Afghan security forces. The recent increase in the so-called green-on-blue attacks forced Coalition partners to suspend training of Afghan security forces.

South Asia, heir to the great Indus Valley Civilization, is reeling after three decades of war. The ongoing war in Afghanistan has already spread east, and extremists regularly operate across the Durand Line that separates Afghanistan and Pakistan. The security situation in the Federally Administered Tribal Areas (FATA) is the worst in decades, with the Taliban in effective control. The adjoining Khyber Pukhtunkhwa (KP) has seen its worst violence since the Afghan war began in 1979. Tens of thousands have been killed in attacks in these northwest Pakistan regions in recent years.

Kashmir is a disputed region surrounded by Pakistan, India and China, and is the main source of the Indo-Pakistan proxy war in Afghanistan. Some of the current jihadi groups were trained in Kashmir and are now operating from Pakistan’s Punjab province. The deadly Mumbai Hotel attacks were carried out by one such group (Lashkar-e-Taiba) in 2008.

The ultimate goal of these groups appears to be establishing an Islamic Caliphate, stretching from east Africa to southeast Asia, somewhat along the lines of the one present in the 8th century at the peak of Muslim ascendancy.

Pakistani terrorists currently operate under various names: Tehreek-e-Taliban Pakistan (TTP), Sipah-e-Sahaba Pakistan (SSP), Tehreek-e-Nafaz-e-Shariat-e-Mohammadi (TNSM), Lashkar-e-Jhangvi (LeJ), Harkat-ul Mujahideen (HuM), Lashkar-e-Taiba (LeT), and many others. Besides the local, home-grown terrorists, there are a large number of fighters (mainly Uzbeks and Chechens) from Central Asia and Arab countries who are now permanently settled in FATA. They were part of the mujahedeen groups who fought against the Russians in Afghanistan.

New terror groups are surfacing on a regular basis to claim responsibility for the almost daily attacks on either side of the Durand Line. One such group, Ahrar-ul-Hind (AuH) was responsible for the recent brazen court attack in the capital Islamabad, in which a senior judge was killed along with many others. Irrespective of the number of characters in their names, they are united in their short term goal of imposing Islamic Shariah in south Asia.

Religio-political parties in Pakistan such as Jumat-e-Islam (JI) and Jamiat-ul-Ulemai Islam (JUI) are staunch supporters of the Taliban. Though both JI and JUI enjoy little electoral support, they nonetheless have superior street power compared to the mainstream parties. Another mainstream political party, the rising Pakistan Tehreek-e-Insaf (PTI) led by former cricket star Imran Khan, is openly supporting the Taliban and is lobbying to open a Taliban office in KP. These three parties are the main source of oxygen and breathing space much needed by the Taliban and other terrorist groups. A NATO supply route was effectively blocked by PTI workers for several months before it was declared illegal by a high court in KP. After every terror attack, the leaders of these parties waste no time in telling their followers that a “foreign hand” (usually, the CIA, Mossad or India’s Research and Analysis Wing) was involved in these attacks in an attempt to sabotage the “peace process.

The political party of Prime Minister Nawaz Sharif strongly believes that the Taliban can be brought into mainstream politics through negotiation. The role of Pakistan’s premier spy agency (ISI) is to support only those Taliban groups that can later be used to exert influence in post-2014 Afghanistan.

The current piecemeal approach of both Islamabad and Kabul is to buy as much time as possible before the murky waters of 2014 become more transparent. Islamabad and Rawalpindi are meanwhile weighing their options to determine which Taliban groups to support and which ones to put on the chopping board. This approach will not succeed. The first round of “peace talks” between the Taliban and the Pakistani government failed miserably, as the attacks on civilians and military personnel could not be stopped. On the contrary, the Taliban have stepped up their efforts to dismantle state structures, and are increasingly bold on either side of the Durand Line.

Pakistan’s interior minister recently announced the country’s first ever “security policy,” which states that after every terror attack Pakistani forces will bomb militant headquarters in FATA. Strikes on a few locations will create more misery for the local populations and add to the hundreds of thousands of internally displaced.

The two economic giants India and China are anxiously watching the events unfolding in their backyards. China has clearly indicated that it will not tolerate a Taliban takeover in Afghanistan. China is facing its own terrorist threat in its west, and it has blamed the Muslim separatists for the recent knife attack in Kunming. India is more concerned about its own home-grown terrorist groups, although the increasing Talibanization of Pakistan could severely cripple its economy.

This creeping Talibanization cannot be contained within Afghanistan and Pakistan; it is bound to spill over into India and China, at least. However, the developing situation in Ukraine could have a game-changing effect in South Asia. For one thing, Ukraine might be a bigger fish for NATO to catch than Afghanistan. For another, note the recent statement by the Pan-Islamist Jihadi group Hizb ut Tahrir: “The situation in Ukraine will not stabilize unless the Khilafah state is established for the Muslims.”

A complete U.S. and NATO troop withdrawal (the zero option) would be chilling for progressive and liberal minority forces in both Pakistan and Afghanistan. Certainly, the upcoming Afghan elections and the NATO withdrawal will determine the security scenario in South Asia. In the complete absence of international forces, the Taliban can have a field day with those participating in the electoral process. Turnouts in the past have been extremely low and another low turnout this time will raise questions about the results.  The credibility of the Afghan government has eroded over time and the political process is in danger of being overtaken by chaos and violence.

The mushroom growth of terror outfits represents an existential threat to the territorial integrity of South Asian nations. Islamabad and Kabul are going to need to take their efforts to another level.

Asim Yousafzai Ph.D. is a geo-political analyst at the University of Maryland.