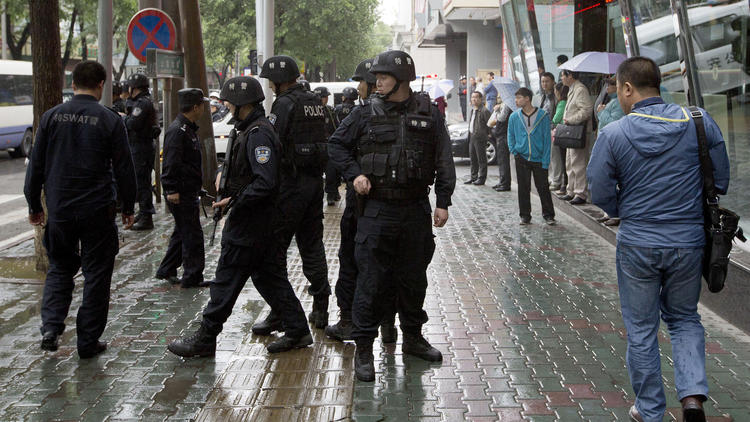 It was the most sophisticated in a spate of recent terror attacks in China.

The attack took place about 8 a.m. at a market outside the People’s Park that was crowded with senior citizens who had just finished their morning exercises and were eating breakfast or shopping. Witnesses said the cars ran through a barricade set up to block off vehicular traffic at the market. Those inside the cars were tossing explosives out of the windows.

“We were about to pay for vegetables, when all of a sudden this car came from behind and knocked us over and then it exploded,” said 50-year-old Zhou Ping, interviewed at an Urumqi hospital Thursday night. “When I got up, I was covered in vegetables and dirt and blood.”

“Two minutes later, another car came that went farther down the road and exploded too, like they wanted to commit suicide. I was in complete shock,” said Zhou. She escaped serious injury but her sister was badly wounded with gashes to the eyes, legs and back.

Wu Gang, 54, an ambulance driver who lives in the neighborhood and was off-duty on Thursday, said there were multiple explosions.

“We heard these bangs, one after another. It sounded like fireworks or maybe construction, but then we heard the sirens and knew it was an attack,” said Wu.

Urumqi, the capital of China’s northwestern Xinjiang region, was also the scene of ethnic riots in 2009 that left nearly 200 people dead.

Chinese authorities did not comment on the ethnicity of the attackers, although witnesses suggested they were Uighurs, a Turkic-speaking, Muslim population that used to be the majority in Xinjang, China’s northwestern-most region. According to some, the cars carried flags in the Uighur language, which uses Arabic script.

From the high initial death toll, it appears that the attack could prove deadlier than a March 1 knife attack at the Kunming railroad station in which 33 died, one of the worst such incidents in recent memory.

“The violence, a further indication of the terrorists’ anti-human, anti-society and anti-civilization nature, should be condemned by the Chinese people and the international community,” Chinese foreign Ministry spokesman Hong Lei said at a news briefing Thursday

The attacks come amid a spate of bombings and knifings attributed to Uighur separatists, who complain about Chinese restrictions on the Uighurs’ religion, language and freedom of movement.

During a visit last month to the region by Chinese President Xi Jinping, the Urumqi train station was attacked by knife-and-bomb-wielding assailants. Three people died. An unverified claim of responsibility for the attack was released shortly afterward by the Turkestan Islamic Party, a shadowy separatist group that operates out of Pakistan which uses the name East Turkestan to refer to Xinjiang.

The Lanzhou-based Central Asia Studies Institute says that more than 170 people have died in China since the beginning of 2013 as a result of Uighur separatist attacks.

Experts say that the attacks are becoming more sophisticated and more deadly.

“Car ramming is a tactic militants in Xinjiang have been using since 2011. What is new is the power of the explosives. It’s possible that militants from outside the country are teaching those in China, either via the Internet or materials that they send in to Xinjiang,” said Jacob Zenn, an analyst of African and Eurasian affairs with the Washington-based Jamestown Foundation

“But it appears there’s an underground network of Uighur militants in China and now the cells are activating. Who knows how many cells there are but there could be a lot,” he added.

Urumqi residents said that whoever carried out the attack had to know the city well because they picked the busiest morning market and the peak time, just before 8 a.m.

By nightfall Thursday, the blood and debris had been cleared from the market by street cleaners and a heavy rain. Most shops in the neighborhood were closed and those that were open had been turned into temporary headquarters for police and paramilitary.

“People are scared,” said a 65-year-old resident who gave only his surname, Mao. “These attacks are getting better planned and better organized.”

Julie Makinen of the Times’ Beijing bureau contributed to this report.