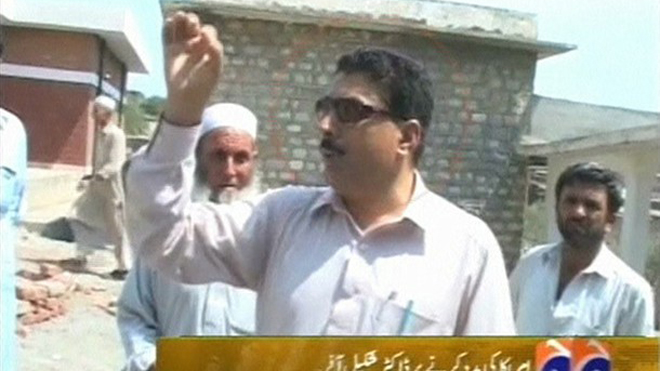 ISLAMABAD: The country chief of a UN agency on Friday strongly rejected Pakistan’s allegations that the UN agencies were used in fake polio vaccination campaigns – an obvious reference to the tracking of slain al Qaeda chief Osama bin Laden in Abbottabad by American CIA through a fake vaccination campaign.
“Totally incorrect and untrue” was the reaction of the World Health Organisation’s Acting Country Representative in Pakistan Dr Nima Saeed Abid, when contacted by Daily Times on Friday. “This is an unfounded allegation that holds no ground.” The UN, he said, conveyed its concerns to the Foreign Office regarding the accusations on Friday. His comments came a day after the Foreign Office said UN agencies were used in the fake polio campaign that, it said, reinforced negative propaganda about anti-polio drive in Pakistan.
“We have been pointing out to the WHO the difficulties we face which include the security situation in certain pockets, the threat of terrorism, attacks on polio workers, also excessive focus on one type of vaccination i.e. polio while children require a cluster of nine vaccines. This created some doubts about the agenda of vaccination among people. On top of that, a fake campaign of vaccination was conducted in Pakistan in which the UN agencies were also used. I am referring to Dr Shakeel Afridi’s case,” FO spokesperson Tasnim Aslam Khan said on Thursday in response to a query during the weekly briefing.
She said, “This further reinforced the negative perception about the agenda behind the polio eradication campaign. We have been trying to overcome that. The religious scholars have been involved to educate and enlighten the population. We have been discussing these issues with WHO.” WHO’s Dr Nima did not subscribe to the FO spokeswoman’s version. “If you recall the OBL episode and the circumstances involving the entire affair, you would stand convinced that Dr Shakil Afridi had nothing to do with any of the UN agencies. Neither did he work for WHO nor any other UN agency.”
Nima Abid Saeed referred to what he described as “leaked evidence reflected in some media reports” from May 2011 and the months that followed to suggest that Dr Afridi was “totally unrelated to the UN”. “The allegations on such a sensitive and serious matter, in the first place, should not be levelled without any solid proof or justified ground.” To a query, the WHO acting representative said the world body officially communicated its reservations to Pakistan’s FO regarding the allegations levelled in Thursday’s briefing. “The WHO’s concern have been conveyed from the platform of the UN and the matter has been taken up with the authorities concerned.”
Requesting anonymity, a senior UN official said the Pakistani authorities were conveyed that the allegations on fake polio vaccination were “tantamount to putting the already endangered lives of anti-polio workers at a greater risk”. A diplomatic source said the ties between the UN and Pakistan have “not been very cordial” since earlier this week after the WHO recommended travel restrictions on Pakistanis travelling abroad owing to the rising number of anti-polio cases. The FO spokesperson’s accusations involving the UN agencies, the source believed, was directly linked to this episode. “The allegations seem reactive,” the official commented.
Earlier on Thursday, Daily Times asked UN Assistant Secretary General (ASG) for Humanitarian Affairs/Deputy Humanitarian Chief Kyunh-wha Kang to comment the serious security threats to the humanitarian workers in Pakistan in discharge of their duties in the context of repeated attacks on polio personnel and the strict recommendations devised by the WHO for Pakistani travellers. She replied, “The humanitarian workers being repeatedly targeted by the non-state elements or the militants is just unacceptable. The WHO recommendations on ensuring polio vaccination for Pakistani travellers raise awareness about the seriousness of the situation. They significantly help to combat the menace of polio in Pakistan.”