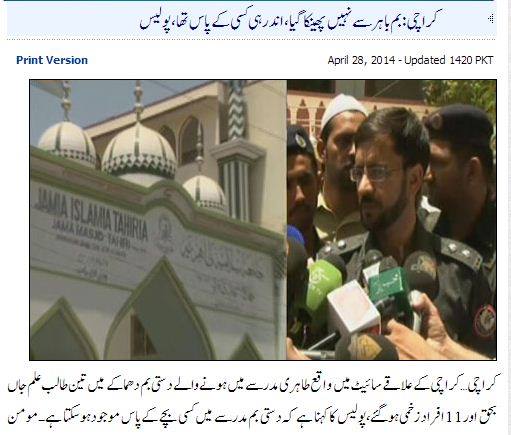 This week on Monday a blast killed three boys aged between 10 and 12 at a religious seminary in Karachi. The blast occurred in the impoverished western district of Orangi, which has a militant presence and a history of sectarian violence. The explosion took place in one of the rooms of a madrassa in Frontier Colony. A police official told reporters that there were between 15 and 20 children present in the madrassa at the time of the explosion. He added that all the children were between seven and 14 years of age. According to a local police chief, Mr Baluch, the grenade went off while students were playing with that. Baluch said the student carrying the grenade was one of the 12 to 15-year-olds killed by the blast in Jamia Islamia Tahiria madrassa, belonging to the Deobandi school of thought. He said the children were playing the near the madrassa’s entrance at the time of the blast.

Contrary to the police and other reports, the seminary officials claimed that someone lobbed the bomb into the class. Without any ifs and buts there is something fishy that’s why soon after the blast the seminary was closed and journalists were manhandled. This incident further accentuates the question marks that hang around Deobandi Madrassas. Not long ago another such incident occurred in Landhi when an explosion in a Deobandi Mosque (Jannat) took place while a bomb was being made. Naeem Ullah, the man who killed the renowned and feared police officer Aslam Chaudhry, was also a student of a Deobandi seminary in the city. It makes it imperative for the government to bring all madrassas under its control to curb any extremist ideology. Moreover, financing from “unidentified sources” and the publication and distribution of hate material requires serious government oversight and control. It is well known that Deobandi Madrassas receive generous funding, especially from their benefactors and ideological sponsors in the Gulf. A large number of terrorists, either are, or have been students of these madrassas where they were brainwashed to take up arms against the state.

It is also worth reminding that it was a Deobandi Madrassaa which had caused killing of a number of people through spreading extremism in Rawalpindi during recent Muharram. Deobandi madrassas have always been the greatest apologists for Taliban violence. While all Islamic Madrassas have sectarian as well as anti-modern bias, Deobandi Madrassas are the potential centres of Islamic militancy in Pakistan not just because of the jihadist indoctrination they impart to their students but because of the ideologues and militants committed to radical, political Islam, who hide behind them.

LUBP deeply regrets the death of these young children at the Deoabandi madrassa. It is sad to see children being indoctrinated to use hand grenades in their pre-teen years. The sponsors (Saudi or other middle eastern donors) as well as the management of the madrassa should be tried for crimes against humanity. Auranzeb Farooqi of ASWJ-LEJ Deoabandi should be immediately arrested for organizing the terror academies or deobandi madrassas.