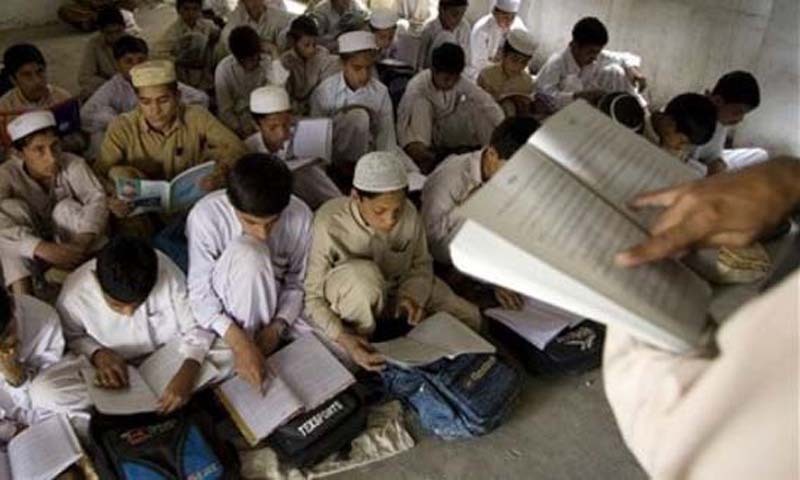 ISLAMABAD: Deobandi Seminaries operating inside the capital are reportedly assisting Deobandi Tehreek-i-Taliban Pakistan (TTP , Deobandi ASWJ-LeJ) with the collection of extortion and ransom money by arranging deals between militants and their victims, sources in civil and military intelligence agencies said.In addition, the seminaries are also providing courier services to the TTP by arranging for the money to be transported to pre-determined locations easily accessible for TTP (Deobandi ASWJ-LeJ) personnel, sources said.

Intelligence officials said that an analysis of the calls made in cases of extortion and ransom demands revealed that most of them came from Miranshah in North Waziristan.

Officials cited the case of retired Lt-Gen Dr Mehmoodul Hasan, who in 2013 received a call from a man named Latif, who introduced him as the second-in–command to Hakimullah Mehsud and demanded Rs50 million in extortion money.

Following the demand, an administrator from an Islamabad-based seminary acted as the mediator and finalised their deal at Rs10 million. The man also sent two persons to collect the money from Lt-Gen Hasan.

“Then, nearly a month ago, a man named Ashfaq called Lt-Gen Hasan again, demanding a further Rs50 million within 10 days,” the officials said, adding that this was followed by another call from someone who identified himself as a leader of the Taliban and asked the general to ensure they got their money within 72 hours.

“The same man who brokered the first agreement was used to negotiate the price,” the officials said.

Moreover, two industrialists from Faizabad and a politician have been receiving calls for extortion since a year, the officials said, adding that they refused to pay the amount and also denied meetings with those who approached them for finalising the deal. In response, the miscreants affiliated with Qari Sanaullah, allies of Qari Mansoor affiliated with TTP (Deobandi ASWJ-LeJ) based in Miranshah, are planning to target them, they added.

The officials said that the role of the religious seminaries in collecting extortion for the TTP (Deobandi ASWJ-LeJ) was established and action against them has been suggested.

“It was decided to mount intelligence and vigilance around the victims and the religious seminaries which would help trace and arrest those who are behind the extortions.”

The vigilance will spot them whenever they contact the victims for finalising the deal, they added.

The officials further stated that the groups of TTP (Deobandi ASWJ-LeJ), involved in generating funds through extortion and kidnapping for ransom, also stay at the seminaries and get assistance from there.

The officials said that intelligence reports also revealed that the extortion and ransom money remained in the seminaries before being transported to other locations by the groups’ members.

Moreover, some victims of kidnapping for ransom were also detained there before being taken to the tribal areas, they added.

Earlier, the role of religious seminaries to assist the TTP in conducting terrorism in the twin cities was unearthed last month. The report, prepared jointly by the special branches of Islamabad and Rawalpindi police, suggested that TTP (Deobandi ASWJ-LeJ) got full support from religious seminaries and worship places of the likeminded Deobandi school of thought.

The report also identified 20 seminaries, all located in Rawalpindi, which were used by Taliban (Deobandi ASWJ-LeJ) for terrorist attacks in the city.

One response to “In Pakistan, Deobandi seminaries playing courier for TTP-LeJ in ‘fund-raising drive’ – by Munawer Azeem”