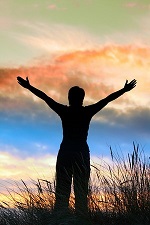 How do we discuss man’s experience of God? To begin with, I think of a man sitting in Hawaii by the shore of Pacific Ocean. He wants to know what Pacific Ocean is all about. And he has a water glass in his hand. Can he adequately measure the Ocean? No, it’s not possible. Human understanding in its encounter with the Divine is almost the same. Before we summon any religious teachings or dogma to our rescue in our comprehension of God, we need to see whether or not our finite, imperfect, and limited human experience holds some signs of a self who is higher and more enduring than our own.  Thus Man’s Experience of God can only be tackled with a scrutiny of human experience itself. Let’s discuss that in a way as limited as is my ability to think.

Human experience contains an inherent indication of the existence of God, who is the source of all that is good and the custodian of moral order. In surrender to the altar of Higher Law man finds that there is a fulfilment of his own destiny. When one closely examines and scrutinizes one’s direct experience of the mystery of life, one comes across inimitable indications of there being a Presence that limits one’s life and sets the direction of its motion. Now to realize that God exists is the easy bit, the problem arises in developing a convincing conception of God with a finite consciousness. The fact that we have a finite consciousness shows that there is an Infinite which surrounds it and makes it seem finite. However, merely acknowledging that God exists does not suffice for the religious consciousness. The religious consciousness requires man to have some idea of who God is. Hence, the need for Prophets of religions to point to man a more coherent conception of God.

Our thinking can only indicate to us the limits of our comprehension.  In that sense it frees us as it establishes for us the limits of our understanding and liberates us to let us rise to a higher level of awareness all in all. So, in demarcating our knowledge, our thinking liberates our knowledge, as it defines to us the limits of our reason. So the contemplation does for us what it can do. That is, by setting the limits of our knowledge, our consciousness, and our familiarity, it indicates that there exist other possible sources of a superior and greater comprehension. For a wide majority of people it is impossible to escape the necessity of affirming God’s existence. However, the difficulty arises in reasonable interpretation of God’s traits.  Even the rejection of God can be affirmation, because with regard to absolute propositions, all denials become noteworthy affirmations.

In human experience the existence of God is implicated in our finitude and I have seen that the kind of God we worship eventually shapes our outlook and influences our growth. In some strange way that we worship, we are in the process of becoming. A man can be discovered by what he loves and therefore by what he worships, because as Ali Ibn Abi Talib explained, worship is the highest form of love. This is a very perspicacious observation by Ali, for a man is indeed what he loves. If a man loves money too much, that reality is his God, and –regardless of what he says-  for him God is not anything other than that. If a man loves the Paradise and the women he expects to get there, and for which he is willing to blow himself up with unsuspecting fellow humans, then his God is that concept of paradise which he covets and nothing else. I have seen from personal experience that when I find out what a man wants, I realize that comprises his longing for God as he perceives Him, because that is the form in which God appears to him. He knows nothing beyond it. Hence our concept of God needs to be continuously and steadily refined. God has no need for our acknowledgment, let alone our worship. It’s we who need His Grace, His love, and His touch.

What we must never forget is that what we worship is what we will ourselves become. Without a feeling of humility, without a sentiment of reverence we cannot even be a good human; the attitude of arrogance only injures us. Thus a religious belief which contributes to your conceit and arrogance is detrimental. While the religion may have become easy to discard because of its contradictions for a modern critical mind, the belief in God is not capable of being so easily discarded. The thing is that God cannot be created in the process of our knowledge of Him. He has to exist in His own right, indeed. In spiritual terms, the desire consciousness is something we live on. The question is how to be aware of this link and cultivate your awareness of His presence.