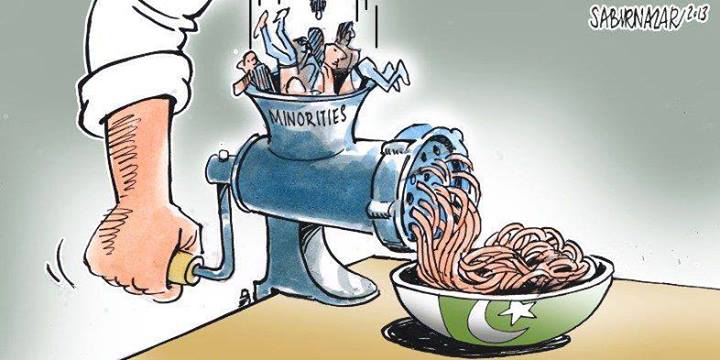 Dr. M is a Shia and he teaches at a Medical College in Lahore. He has been advised by his friends to maintain a private guard for himself and his children. He was told by a friend in police not to follow the same route every day while going to office. Ever since the murder of one of his friends he and his entire family are living under constant threat. Although very well settled with a regular job and flourishing private practice, his wife, who has a sister in Canada, is pressing hard to apply for Canadian immigration.
N, a Christian and his cousins run a barber shop near Walton. A few days back N received a frantic call from his brother not to come home as some papers were found near a nullah on which Arabic text was written. There was widespread anger in the area and some boys were burning tyres and agitating on the road. It was later found that those were expired travel documents from a Gulf country.

H is an Ahmadi who was studying at a medical college when a college professor with a long beard called him to his office and told that he wanted to give him a piece of advice. He informed Tahir that his (Tahir’s) faith was faulty and he should get rid of it for it would bring disaster in this life and the hereafter. He also told him that some students of the political wing of a party were terribly annoyed with him and if he would not listen, he might have to leave the college. Tahir was terribly upset until he received a threatening letter calling for his being blasphemous. He then left the college and is presently working as a salesman with a pharmaceutical company in Lahore. His father who had a cloth shop in Faisalabad also received threats. He later disposed of his shop and moved to Lahore with his family. They now live at Kacha Ravi road and though it seems very embarrassing, Tahir avoids using “assalam-o-alikum” for it is unlawful for Ahmadis to use this expression.

J is a Hindu whose sister was kidnapped in broad daylight by goons of a sitting MNA from Sindh. She was then forcibly converted and married to a Muslim. J then registered a case against those involved. He thereafter received threats that if he pursued the case, there was enough evidence of blasphemy against him which could lead to his condemnation under the law of the land.

S is a known personality from showbiz. She is Jewish by birth but everybody knows her as a Christian for it can be very dangerous if people come to know that she is a “heretic”. She and her family never disclosed it to anybody.
K is a liberal-progressive and is on Facebook. A few days back when he learned that a lecturer from Bahauddin Zakria University Multan has been booked under the blasphemy law for just “liking” someone else’ comment on his page, he lost all hope in the future of this country. He removed many of his posts and reset his privacy. He also removed all his pictures and recreated a fake ID.

M is SSP police who is dealing with a blasphemy case. His wife received a telephone call that if he let the accused go, his family would not be spared. Since then he is terribly worried about his two daughters who are studying at Lahore Grammar School. He is also trying to get himself transferred.
N is a judge of the High Court where a bail application of a blasphemy accused is pending. He has received a threatening letter wherein he has been warned that if he granted bail to the accused, he and his family will have to pay the price. He is a conscientious judge but is extremely apprehensive and has decided to keep the case pending.

R is a religious scholar, quite moderate and enlightened. However his views on blasphemy law have not been “appreciated” by some religious groups. After receiving some threatening calls, he has ceased to go public. He has also obtained visa of a gulf country where he would be flying soon with his family for living in this country is no safer.
G is a social activist who once would openly criticize the blasphemy law. However after the murder of some high ups in the sitting government she no more questions the law on media. She also appears less and less on the television and is planning to shift to the US where her daughter lives.

There is a small bungalow at Lahore Cantt which is a place of worship for Parsis. However there is no sign board outside. These people of a tiny community gather here once a week for prayers. Once there were 66 Parsis in Lahore. Now they are less than 30.The rest have migrated.
Madina market is at a prime location in Lahore. One day, some mullahs from the nearby madressah came and asked the shopkeepers to display a poster at a prominent place outside the shop. It read; “No dealing with Ahmadis”. The shopkeepers were informed that removal of that would constitute blasphemy.

Mehnga Masih had a property dispute with Molvi Daud. One day some burnt up pieces of the holy book were found in front of his house. They were soon “discovered” by the nephew of Molvi Daud. Soon, on the mosque loudspeaker an announcement was made of the “blasphemous” act. And it was sooner rather than later that people came out on the streets. Police reached at the place and arrested Mehnga who was taken into police custody. His family was informed that he would be lynched outside so he would be in safe hands after his arrest.
Mehnga was kept in solitary confinement. He thought he was safe in jail. However, three days later while he was being taken to the prison hospital he was stabbed by another inmate. He died on the spot.