Editor’s note: The Rawalpindi and Islamabad police report cited in this article by Dawn clearly identifies that Deobandi Madrassas (funded by Saudi Arabia) are giving active support to the TTP to carry out attacks in the capital of Pakistan. The report validates LUBP’s analysis that the terrorism is deeply rooted in the Deobandi Madrassas with active funding by Saudi Arabia. The terrorism against Shia, Sunni brelvi, Christian and Ahmadi is rooted in the intolerant Salafi and Deobandi ideology and 90 percent of Pakistanis are held hostage by the 10 percent Deobandis and their Saudi funders. Since the terror is entirely religion based there are no good or bad Taliban, the weakness shown by the government to negotiate and isolate the bad Taliban is a fallacy. Distinguishing between LEJ, TTP, ASWJ as good and bad is a fallacy, these are trained and brainwashed killers driven by ideology.

There is mountains of evidence to support the eulogizing of terrorists in every Deobandi Madrassa. Here is recent evidence that the Red Mosque in Islamabad has named their library after Ossama Bin Laden. 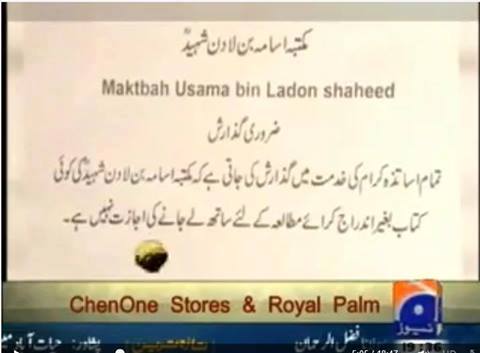 A report jointly prepared by the Rawalpindi and Islamabad police has claimed that the outlawed Tehrik-i-Taliban Pakistan (TTP) was getting active support from hardliner religious seminaries to carry out terrorism in the twin cities.

Fearing a strong backlash from the TTP in case of the failure of the ongoing peace talks, the federal government had directed the police to collect information about the sympathisers and supporters of the Taliban. The police prepared the report with the help of intelligence agencies.

The report, a copy of which is available with Dawn, stated that the TTP was not alone whenever it carried out terrorism activities in the twin cities. “It (TTP) gets full support from the religious seminaries and worship places of the Deobandi school of thought.”

The seminaries and worship places are used by the TTP terrorists for lodging and sheltering.

The main seminaries that provided support to the TTP are: Jamia Darul Uloom Zakrya Basti Anwarul Madina, Sara-i-Kharbooza, Tarnol, led by its administrator Pir Azizur Rehman Hazarvi, and Jamia Khalid Bin Walid located at Shams Colony in Golra which is administered by Maulana Fazlur Rehman Khalil. It said Khalil was also the chief of Ansarul Ummah and a Jihadi commander.

These two seminaries, according to the report, were used by the TTP as the central points of activities to carry out terror attacks in Islamabad and Rawalpindi.

Then there are scores of other seminaries and Jamia (central) mosques whose like-minded administrators are working in tandem with these two madressahs.Whenever the TTP planned to carry out a suicide attack in the twin cities, the last-moment support was provided to the attackers by the like-minded administrations of the seminaries and mosques located in the targeted areas.

These seminaries in different parts of the cities have students from KP, Fata, South and North Waziristan, Bajaur, Khyber and Mohmand agencies, the report stated. The students were also being imparted Jihadi training in the main seminaries – Darul Uloom Zakrya and Jamia Khalid Bin Walid.

Besides, religious seminaries and worship places managed by the Deobandis were also supporting the TTP through the administrators of the two main madressahs.

“In case of an army operation against the TTP, like-minded seminaries will be given the task to help TTP in carrying out attacks in the twin cities,” the report said. Besides, seminaries in the far-flung areas would be used by the terrorists as their sanctuaries.

The report identified 20 such seminaries in Rawalpindi which would be used by the TTP attackers.

These madressahs are located in the Cantonment, Tench Bhatta, Girja Road, Westridge, Dhamyal Camp, Saddar, Ittehad Colony, Khayaban-i-Sir Syed, Kashmiri Bazaar, Pindora, Sadiqabad, Pirwadhai, Chaklala and Dhoke Hasu. The report added that scores of students from Ummat-i-Islamia Public High School in the Jhand tehsil of Attock district had gone for Jihad with the TTP, adding nine of the students were currently stationed in Waziristan.

The school principal Manzoor Hussain’s two sons – Mujahid Manzoor and Shahid Manzoor – used to preach Jihad to other students of the school.

“Now the two are in Waziristan and engaged in Jihad along with the TTP.” The principal is a grade 18 officer of the agriculture department and was previously affiliated with the Jamaat-i-Islami (JI). Later, the JI cancelled his membership after he entered into a second marriage with a female teacher.

“Two students of the school, Mohammad Usman and Abdul Mateen, were killed in Afghanistan,” the report stated, adding they had gone to Afghanistan after completing their matriculation.

Two other students of the school, Imran Sattar and Hafiz Mudassir, carried out terrorist attacks in Jhand on January 28, 2010, and Korangi Ada on February 8, 2013.

The report said the school was training the students of 9th and 10 classes for Jihad. A large number of people from North and South Waziristan have been migrating to other parts of the country after the army conducted air strikes on militant hideouts there.

“Well-trained terrorists and their leaders and commanders can also slip out of the their hideouts in Fata and take shelter in the hilly areas such as Abbottabad, Kakul, Nathia Gali, Murree, Jat Alyot and Phagwari,” the report stated.

They can later move to the twin cities and take shelter in the seminaries and then carry out terrorism activities.

“In reaction to the possible army operation, Taliban can also use Pashto speaking scavengers and women to attack their targets.” The report said the TTP activists can also find supporters and sympathisers in the rural areas of Islamabad and Rawalpindi such as Bhara Kahu and Adiala Road.