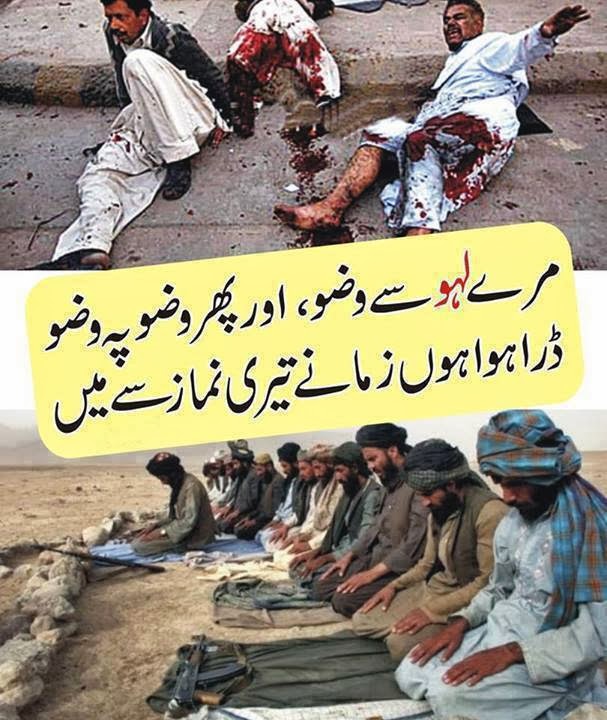 Ablution with my blood again and again
O ‘ people!thou scare me with your prayer
The demand of SHARIA by TALIBAN is like, killing a man and stuffing prayers with ablution of his blood and their SHARIA refers only to play HOLI with the blood of innocent humans. They have been used to such barbarism that they do not get appeasement unless they kill innocent people. What type of SHARIA is it, in which no Mosque, Imambargah is safe, where they play football with decapitated heads.
What type of SHARIA in which they kill POLIO workers?
What SHARIA, in which they destroy Girls school?
What SHARIA, in which they shot an innocent and unarmed girl MALALA, just because she was the preacher of girls education?
What SHARIA, in which innocent girls get lashes in the name of adultery?
What SHARIA that responds by killing JOURNALISTS and attacking MEDIA HOUSES, instead of logical argument?
What SHARIA that permits Bank Robbery. Kidnapping for ransom, Drug and Arms Trade.
What SHARIA that allow to form the Tower of Skulls of innocent people?
What SHARIA in which ERUDITE scholars and Religious scholars, hundreds of mosques, imambargah, churches, shrines , girls’ schools and armed forces installations are the target of terrorism.
Taliban isn’t specific to any particular group, that by declaring them ban, doing operation and we can get rid of this menace . Actually Taliban is a Mind Set, a Cult, a Religion must be stopped to spread. Every sector in our country, they have infiltrated this mindset . Journalists like Oriya Maqbool Jan & Ansar Abbasi, politician like Imran Khan or religious parties like Jamaat-e -Islami all are reflect the MIND SET of Taliban. And same group of people in the media and social media have been spreading this MIND SET . Madrasas are also running to create same mind set among Madrasas’ Student. We must understand, Sipah Sahaba , Lashkar -e-Jhangvi , Jamiat Ulma-e-Islam all are mafias. Ideologically all are same and TALIBAN are practically following this ideology. While others are providing Taliban Manpower, Logistic, Funds, Intelligence and provide Shelters.
Many countries, including Bangladesh and Egypt are the countries which ban the parties of excommunicated thinking of same cult like Jamaat-e-Islami, Ikhwan ul Muslimoon before they destroy the nation . Bangladesh has given life sentenced to Jamaat-e- Islami, which is the follower of same Cult. Same pattern of action badly needed in Pakistan for those who believe in the same ideology.Parties who support , like Jamaat-e-Islami, JUI (Sami ul Huq Group), PTI should be banned and also pro Taliban Journalists must be banned in media. Pages run by Taliban on Social Media should be closed and and operation like LAL MASJID, on Madrasas involving spreading this ideology should be taken. Only then it is possible to eliminate the Radical Taliban thinking . Otherwise there is no use to talk million times with them . Until this remedy is not done , peace would only an illusion. While the state have forgotten all and only thing they stress is negotiation. Even if govt becomes successful in NEGOTIATION there will be no peace in Pakistan . Primary reason for this is that on the agenda of the talks terrorism activity on Barelvi , Shia , Christians , Ahmedis , Hindus and other religions and sects are not on the agenda. And Taliban don’t consider anyone Muslim but themselves. They won’t stop killing of other sects.

Lastly, I’ve a question. What If beloved children of Chudhry Nisar, Nawaz Sharif, Imran Khan & Munawar Hassan’s Killed? Would even then they stress on dialogue? 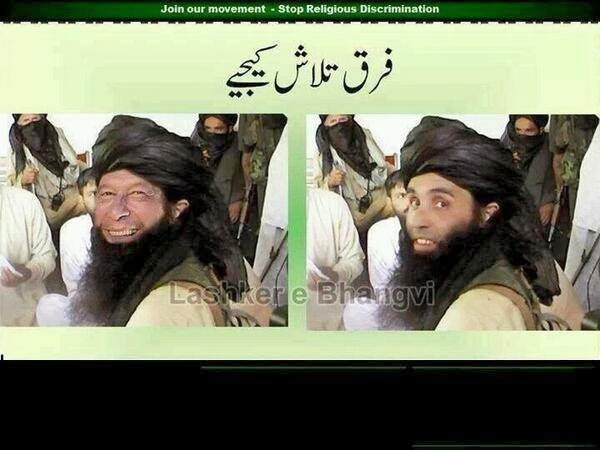