Another Christian victim of the black blasphemy law: Sawan Masih 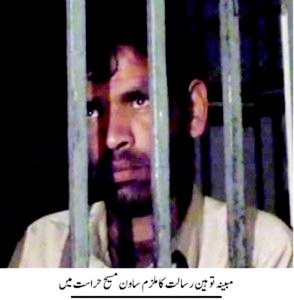 Today  Sawan Masih an innocent Pakistani Christian sweeper was sentenced to death under the allegations that he had blasphemed against Prophet Muhammad after waiting for an year for a verdict. This took place after Sawan and his Muslim friend got into an argument. What better way to win the argument then to blame the poor christian of blasphemy! Not only was Sawan put into prison an old christian neighborhood Joseph Colony was burnt down by a mob of 300 angry Muslims in reaction to this “blasphemy”. Poor christian families lost their houses and savings in split seconds.

According to the Pakistani constitution the blasphemy laws are in place to protect Islamic authority. But who are we kidding ever since the induction of these laws who has this law protected?? Instead it has been used as a weapon to take revenge and fulfill hateful greed. It has suffocated the essence of freedom of speech creating an environment of fear and restlessness. There is a constant threat when non Muslims are around Muslims that anything could trigger an incident that could lead to being accused of blasphemy. Christian children are told to be mindful of everything they say around their Muslim friends every day. There are so many examples that can be pulled out of daily lives of minorities in Pakistan which can prove how exposed their lives are to the threats of draconian laws like the blasphemy laws that sanction death or life imprisonment to anyone who as little as gestures or creates a sound that hurts the feelings of a Muslim.

While there is a growing number of liberal Muslims that are speaking up along with the religious minorities against these laws and are calling for their repeal. The people that hold power and influence are still narrow minded Islamists who are adamant on keeping these laws as a weapon to sabotage minorities asking for equality and to keep them bent under the heavy burden of fear. Even though it does not meet the threshold of the “most serious crimes”, which are the only crimes for which the death penalty can be imposed under international law. According to a poll by a famous Pakistani English newspaper “The Nation” 68% of the Pakistanis believe that blasphemy laws should be repealed.

Today we are witnessing the death of an innocent man like so many innocent lives that are being lost in Pakistan due to various forms of religious intolerance and hate. But if we remain silent in response to these injustices for fear of our lives we are going to let our land drown in innocent blood and we will be accountable for not raising our voices for our persecuted brothers and sisters. The youth of Pakistan is the NOW of Pakistan. It is in our hands to stop these evil forces that have hijacked our country. We need to uphold and share the message of tolerance, love and peace. Lets us write, speak and act to stop laws like blasphemy from being practiced in our country. I read a quote once and it has become one of my beliefs: It does not take a majority to prevail, but rather an irate, tireless minority keen on setting bush fires of freedom in the minds of men.

David Griffiths, Amnesty International’s Deputy Asia Pacific Director said today, “This is a travesty of justice. There are serious concerns about the fairness of his trial, and an argument between two friends is not a basis for sending anyone to the gallows. Savan Masih must be released immediately and unconditionally”. Let us raise our voice  and campaign for the release of Sawan Masih. It is time we value human life more then ancient doctrines that have been incorporated into our system not to uphold any faith but to use them as instruments of fear and persecution. There are very slim chances that we maybe successful but we will have done our duty for justice and humanity.

11 responses to “Another Christian victim of the black blasphemy law: Sawan Masih”