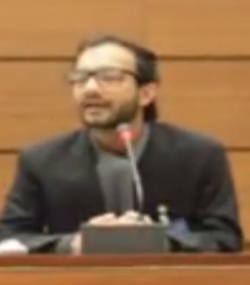 We commend Pakistani human rights activist and chariman of Pakistan Youth Alliance, Syed Ali Abbas Zaidi, on delivering a well argued and convincing speech on Shia genocide in Pakistan, at a corner meeting of UN Human Rights Commission in Geneva.

In his speech, Zaidi clearly mentions the Deobandi identity of terrorists of banned terror outfit Sipah-e-Sahaba Pakistan (SSP, currently openly operating as Ahle Sunnat Wal Jamaat ASWJ) and Taliban (TTP), and also states that they are not only killing Shias but also Sunni Sufis/Barelvis and minority commnities. 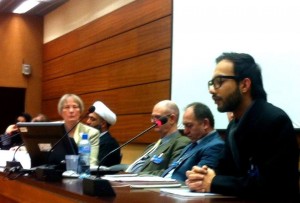 He clearly states that Shias and Sunni Barelvis are being killed by Deobandi terrorists for their faith and that the killings are religiously motivated. He notes that Deobandis are a minority sect representing no more than 15-20 per cent of Pakistan’s Sunni population. He also clarifies that not all Deobandis are terrorists but almost all terrorists involved in attacks on Sunni Barelvis/Sufis, Shias, Christians and other groups happen to be Deobandis.

It is important to add that Deobandi (semi-Salafi) terrorists of ASWJ-SSP are strategic assets of the Salafi/Wahhabi state of Saudi Arabia and its loyalist rogue section in Pakistan Army. It is a business to use these thugs for a price for geopolitical reasons eg during Afghan Jihad of 1970s-80s and currently in the Saudi-sponsored Jihad in Syria. In his recent 5-article series in the Independent, veteran columnist Patrick Cockburn has clearly highlighted the role of Saudi Arabi and Pakistani establishment in promoting the global Salafi/Wahabi and Deobandi Jihadist ideology and militants.

We appreciate Ali Abbas Zaidi who, unlike a few misinformed or compromised “liberals”, has called a spade a spade and clearly highlighted the identity of the victims and the killers. His public stance should be encouraging and reassuring to those Sunni Barelvis and Shias who remain in denial or silence about publicly stating the common Deobandi identity of terrorists.

We also notice that in the aftermath of Zaidi’s speech, a section of Saudi-Deobandi lobby in Pakistan, led by one Ahmad Quraishi, has been activated to attack Zaidi and other Sunni Barelvi, Shia and progressive human rights activists. It may be noted that Ahmad Quraishi is known for links with a a rogue section in Pakistani establishment which remains sympathetic to Deobandi ASWJ-SSP terrorists and has been openly supporting the Deobandi-Wahhabi fronts such as Difa-e-Pakistan Council (DPC) which was led by two banned orgnaizations: Sipah-e-Sahaba Pakistan (Ludhyanvi) and Lashkar-e-Taiba (Hafiz Saeed). In his recent article in The News, Ahmad Quraishi not only tried to hide the faith-motivated Shia killings in Pakistan but also attacked Iran and presented Shia killings in Pakistan as Iran vs Saudi issue to obfuscate the dirty role played by local Deobandi clerics and outfits in massacres of thousands of Sunni Barelvis and Shias in Pakistan. We hope that governments of Switzerland, US, UK and other democratic countries will probe Ahmed Quraishi’s direct and indirect links with Saudi-backed Deobandi and Salafi terror groups, and will also take note of his attemts at hiding or justifying terrorism.