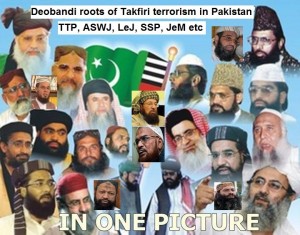 While he talked to Let Us Build Pakistan web site and categorical rejected any deal with deobandi terrorists and he warned government of Pakistan to be ready face of harsh reaction of Sufi Sunnis which are called in Subcontinent as Sunni barelvis. 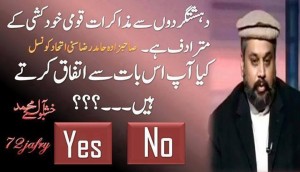 On other side head of Pakistan Sunni Tehreek which is another powerful and representative of Sunni Barelvis of Pskistan Allamav Sarwat Qadri said that Government was bound to pay دیتof sixty thousands mrtyers of Pakistan which were killed by deobandi takfiri terrorist organizations like TTP,ASWJ etc. Every worker of Sunni Tehreek is ready to sacrifice himself for protection of Pakistan. He said that Sunni of Pakistan will make new میلادی Pakistan. He condemned decision of intervention in Syria and running of Saudi proxy in that country and demanded for at once stop interventionist approach toward Syrian conflict. He condemned so called torch bearers of Sharia like mullah petrol and diesels who are distorting image of Islam for their vested interests. He called pro Talibans political and religious parties as fake and so called contractors of Islam. He demanded to ban on those political and religious organizations and Parties who support deobandi terrorists networks in Pakistan like all factions of JUI and Ji etc. 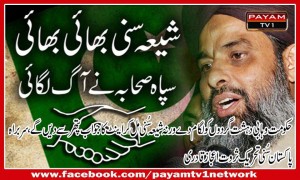 We saw also very strong reaction against deobandi takfiri terrorism in Pakistan among participants of Ya Rasoollah Conference at Dera Allah Yar city organized by Sunni Itehad Council and MWM. Prominent main leadership of SIC and MWM including Mufti Saeed ,Allamah Raja Nasir Abbas Jaffari addressed big gathering and rejected any deal with deobandi takfiri tereorist organizations by government and demanded full military operation Another big gatherings of Sunni Barelvi Community was at Shrine of famous Sunni Sufi Saint Shah Rukn-e-Alam where head of Jamat -Ahl-e-Sunnat and son of prominent,Great Sunni Sufi scholar Ahmad Saeed Kazami Sahibzada Mazhar Saeed Kazami said that Sunni would never accept imposition of so called Sharia on gun point and will never bear any effort for making deobandi Takfiri ideology as state ideology and marginalization of Sunni beralvi commmunity . These statements and speeches and resolutions clrealy prove that Sufi Sunni Barelvi are not in suport of talk to Taliban and other deobandi Takfiri terrorists and they are going toward show their street protests and powerfull resistance against deobandi takfiri terrorism and suport of PMLn to deobandi takfiri terrorists.

On other side majority of deobandi organizations like JUI(s) and JUI(n) and organization sole representative of all deobandi seminaries are supporting Idea of talk to deobandi Takfiti terrorist organizations by Nawaz government . Yeaterday Molvi Ajmal Qadri deobandi leader of JUI(q) visited Hasilpur city of southern Punjab and called opposers of talks with taliban as negative elements. Deobandi Takfiri terrorists orgnization ASWJ is also very active to counter opposition of Sunni beralvi community of talks with deobandi takfiri tereorists. Head of tereorist organization Muhammad Ahmad Ludhiyanvi called opposers of talks traitors and enimies of country and security of state.He was addressing in deobandi seminary Jamia Usmania Shorkot subdivision of district Toba Tek Singh of Punjab near Jhung city where SSP/ASWJ was founded. Interesting thing is that Crisis Management Cell of federal interior ministery gave an ad to National dailies in which it mentioned 60 such groups and parties which were banned and declared tereorist organizations and in list on Second number we find ASWJ as banned teerorist organization and this was banned in month of March in last year but this party is working and running its set up all over Pakistan freely.
http://epaper.dawn.com/Advt.php?StoryImage=02_02_2014_005_008