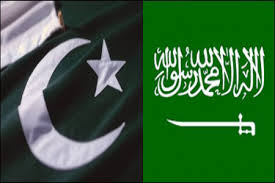 On February 26, India and Saudi Arabia signed an agreement to strengthen co-operation in military training, logistics supplies and exchange of defence-related information. However, it is Saudi Arabia’s deepening role in propping up the Pakistani jihadist military state on India’s border that is creating a long-term security threat to India.While a strong Saudi-Pakistan defence partnership has existed for long, the upswing in the relationship marks a qualitative change, with Riyadh motivated by an urge to overthrow the Shia regime in Syria and counter a nuclear-capable Iran.

There are two immediate reasons behind the growing Saudi insecurity, resulting in Saudi Arabia’s move to transform itself as a regional military power. One, Riyadh is deeply dismayed by the US failure to play a consequential role in the Syria uprising to overthrow the Bashar al-Assad regime. Two, the current White House’s policy of rapprochement with Iran is causing anxiety among the Saudis and other Sunni states. The Saudi insecurity became severe after the Geneva 5+1 pact with Iran, which is aimed at curtailing the Iranian nuclear programme but in effect is rewriting the balance of power in the Middle East.

And although Islamabad has denied that it will provide nuclear technology to Riyadh, such a Pakistani claim is not reliable because: one, the emerging Saudi strategy seems to be aimed at countering Iran’s nuclear programme; two, it was reported last year that Saudi Arabia has invested in the Pakistani nuclear programme; three, in recent decades, Pakistan has been transformed into a client state for the Saudis, rendering Islamabad incapable of denying a Saudi request for Pakistani nuclear weapons and technology. On March 7, Pakistani foreign office spokesperson Tasneem Aslam admitted that the Pakistan-Saudi co-operation involves the possibility of “defence production”. On the night of March 4, Aftab A Khokher, the consul general of Pakistan in Jeddah, was chief guest at an event on the Pakistan Navy ship PNS Alamgir, where he noted that the Pakistan-Saudi relations are “beyond any limits”.

Liberal Pakistani commentators are worried over the likely Saudi use of Pakistani weapons in Syria. First, it could push Iran to respond in kind in Pakistan. There is a precedent: during the 1980s’ jihad in Afghanistan, Saudi Arabia propped up jihadi groups and fundamentalist Deobandi madarsahs, which are the sole reason for the Shia genocide now unfolding in Pakistan. As the Saudis armed the Deobandi militant groups, Iran backed Shia groups in Pakistan. Second, Pakistani Deobandi Taliban militants are now present in Syria, fighting to overthrow the al-Assad regime. These militants will someday return to Pakistan, further drowning the country into jihadism. Even now Pakistani writers think that the ground in Pakistan is already paved for Islamic sharia rule. Third, the current peace negotiations between the Pakistani government and Deobandi Tehreek-e-Taliban Pakistan are being seen as enjoying the support of the Saudi leadership. The strengthening of the Taliban and the militants returning from Syria will transform the jihadi landscape in Pakistan in coming years. At the minimum, the current Pakistani talks with the Deobandi Taliban will offer a permanent sanctuary to the Deobandi Taliban and Salafi Al-Qaeda fighters in Waziristan as part of any peace deal.

Pakistan has approved the Saudi line on Syria. At the end of Salman Abdulaziz’s visit to Islamabad, Pakistan and Saudi Arabia issued a joint statement on February 17 in which Pakistan underlined the need to overthrow the Shia regime in Damascus. As per the statement, Riyadh and Islamabad “called for the formation of a transitional governing body with full executive powers enabling it to take charge of the affairs” in Syria.Worried over these developments, several Pakistani writers warned Islamabad against getting embroiled in Syria. Columnist Mosharraf Zaidi accused the Nawaz Sharif government of “bartering” Pakistan’s sovereignty for money by aligning with Riyadh’s interventionist policy on Syria. Journalist Nadir Hassan warned against Pakistan’s entanglement in Syria, saying it will alienate Shia Muslims in Pakistan. Senior commentator Ayaz Amir blamed Pakistan’s Syria entanglement on two factors: one, Nawaz Sharif’s incapability to say no to Riyadh; two, Pakistan’s need for cash. Columnist Nazeer Naji advised Pakistan to save itself from the Syrian conflict, warning that its flames will engulf several countries in the region including Iran, bringing the fire to Pakistan’s border.

The Saudi-Pakistan partnership is certain to boost the jihadist organisations and the Pakistani intelligence agencies which are nurturing them, thereby transforming Pakistan into a complete jihadist military state in the near future. Indian diplomacy aims at boosting co-operation with Arab regimes, based on the argument that the interests of about seven million Indians working in the Middle East must be defended. India used this argument in 2003 when it rejected a US request to send troops for the Iraq war. However, India must also remember that the Saudis’ strengthening of Pakistani jihadist state could mean the following: it will threaten India in the long term; it will destabilise Afghanistan which has been gaining a sense of stability; it will birth more jihadist organisations in Pakistan, which are bound to affect a large Muslim population in India, thereby threatening the cohesion of India; it will cause Sunni-Shia conflicts across South Asia. Hopelessly, India cannot even get the Saudis to moderate their conduct to curb jihadism on India’s borders.