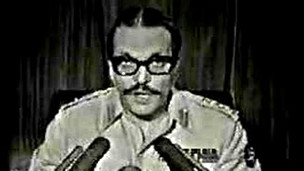 During the 1984 presidential referendum in the country, voters were asked whether they supported Gen Ziaul Haq’s efforts for the Islamisation of society. More than 98 percent of voters replied in the affirmative and the incumbent was elected president of Pakistan for five years.

The apparently simple question used for the referendum was misleading, for it had taken for granted that the military dictator had been striving for the supremacy of Islam and that voting for him meant voting for Islam. The choice between electing or not electing Zia to the highest office of the state – essentially a political question – was thus cloaked in the grab of faith and turned into a religious matter or choice.

Today the nation has been presented with a similar choice by pro-Taliban leaders: If the people of Pakistan want to uphold Islam and the constitution and are keen to throw off the yoke of foreign domination, they must embrace the Taliban. A leading cleric, who has never minced words in dubbing militants as the ‘soldiers of Islam’, holds that by calling for the enforcement of Shariah, the Taliban have sent out the message that they are working for the supremacy of the constitution held in ‘disregard’ by successive governments. Like Zia’s referendum, the pro-militancy narrative contains within it certain assumptions of dubious validity.

Assumption 1: ‘The militants’ fight is for the supremacy of Islam.’ Really? There is no doubt that the enforcement of Shariah is a capital demand coming from the Taliban. That said, demanding at gunpoint that Shariah is made the supreme law of the land and struggling for the supremacy of Islam are entirely different propositions. What this assumption actually amounts to is that terrorism can be a legitimate ground for the propagation and enforcement of faith.

Can Islam, or for that matter any other religion, be enforced by force? In a country where Islam is already the state religion and where at least 97 percent of the population is Muslim, what danger does Islam face to warrant tactics such as those being employed by the Taliban? If such an assumption is conceded, the state and society will have to condone any offence committed in the name of religion be it the killing of non-Muslims and members of other sects or burning down places of worship.

Then there are divergent interpretations of Islam: progressive and primitive, strict and liberal. Does Shariah essentially stand for stoning to death or amputation of the limbs? Is going to the shrines of sufis and saints un-Islamic and thus deserving of severe punishment? Are men who do not grow a beard or women who do not veil themselves lesser Muslims? Is co-education or even girls’ education forbidden by Islam? Is desecration of sacred places of rival creeds a religious obligation?

Assumption 3: ‘The struggle for the enforcement of Shariah, no matter what forms it takes, is within the ambit of the constitution and therefore justified.’ Yes, the constitution declares that no law shall be made that is in conflict with the injunctions of Islam and that all existing laws shall be made consistent with the Shariah. Yet, this is exclusively the obligation of the state, which is to decide how and when the same would be met. Non-state actors can at best petition the state to do so. They cannot legitimately resort to violence or militancy to dictate their terms to the state.

Article 256 of the constitution outlaws, in express terms, private military organisations no matter what their avowed purpose is. How then can Shariah be put into effect by the barrel of the gun?

Assumption 4: ‘The Taliban are freedom fighters.’ The pro-militancy narrative accuses the government of being a puppet of foreign elements, particularly the Americans, and hails the Taliban for what they claim is fighting to rid the state of foreign domination. Granted that the allegation is valid, who has given the Taliban the right to cast themselves in the role of freedom fighters? Under what provision of the constitution or law have they declared a ‘jihad’ against Americans or any other nation? If the sovereignty of the state is at stake, the threat emanates much more from the militants than from any foreign state.

Assumption 5: ‘A political question is essentially a religious question.’ Terrorism is a political problem but it has been made into a religious issue. Referring to the demands of the Taliban, a noted cleric recently said that if we had to choose between the Shariah and the constitution, we must go for the former. The choice as it has been framed is as misleading as was Zia’s referendum. This militancy does present the nation with a choice. But it is not Shariah versus the constitution; rather the choice is between embracing and extolling those who regard mass slaughter as a religious duty and finally tackling them.

Neither Islamic injunctions nor the basic law of the land will be strengthened by the victory of the Taliban. Nor is anyone entitled to subvert the constitution in the name of religion.

It was the Zia regime that had fathered the present breed of militants. Today they are paying their debt to him by terrorising the nation in the name of Islam. At the same time some of the principal beneficiaries of the Zia regime are acting as their consorts and apologists.