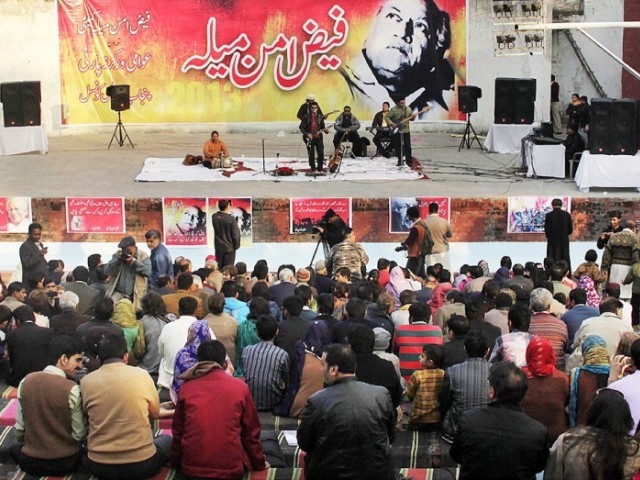 I am very happy that in great numbers people came in the name of Faiz.

But in that festival I did not see any banner reflecting plight of the Baloch, Shia, Sunni Barelvi, Ahmadi, Hindus, Christian or other persecuted or target killed groups of Pakistan who are suffering bitter oppression of state and non state actors of Pakistan.

There was no  banner reflecting the plight of those communities and social groups who are victim of imperialist global capitalist devolpment projects all over country. No resolution was passed condemning stat,s organised genocide of Baloch people, genocide of Shia community and extra judicial killing committed by security forces and intelligence agencies.

There was no theater group who presented any act on happenings in Baluchistan or reflecting role of state and others in proliferating of anti Shia, Sunni Sufi cultural religious terrorism and extreme-ism. No intellectual or political activist spoke against such bad designs. Faiz Peace Festival started in Zia era and this festival became sign of struggle and voice of oppressed religious and ethnic communities and it helped in increasing momentum of movement for restoration of democracy (MRD).

But today this festival is not reflecting desires and aspirations of victims and oppressed.

I have a question to the organizers of the Faiz Peace Festival.

Why was no such event organized to show solidarity with long march for the Baloch missing persons or with the ongoing Deobandi terrorism agaisnt Sunni Barelvis and Shias?