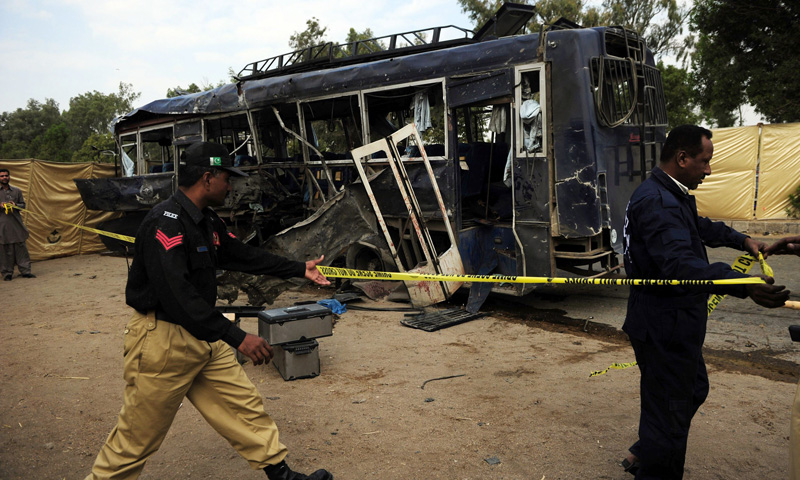 I met a traveller from an antique land,

Who said — “two vast and trunkless legs of stone

Stand in the desert … near them, on the sand,

Half sunk a shattered visage lies, whose frown,

And wrinkled lips, and sneer of cold command,

Tell that its sculptor well those passions read

Which yet survive, stamped on these lifeless things,

The hand that mocked them, and the heart that fed;

And on the pedestal these words appear:

My name is Ozymandias, King of Kings,

Look on my Works ye Mighty, and despair!

Nothing beside remains. Round the decay

Of that colossal Wreck, boundless and bare

The lone and level sands stretch far away.”

Immediately after the Taliban attacked a police bus heading towards Bilawal House today, Chaudhry Nisar Ali jumped, as if on cue, at the opportunity and blamed the PPP government for incompetence. “Sindh,” he thundered, “is moving towards chaos”. In a sinister way, he indicated that he would meet the governor of Sindh, an MQM man. Needless to say that these days the MQM and the PPP are at loggerheads, and the former will love to see the PPP government sacked in the name of security (Read:

The attack in Karachi was the latest in the string of a violent campaign of terror by the Taliban in Karachi. This time, it was not the Shias, but policemen. Thirteen of them perished on the spot (Read: http://www.dawn.com/news/1086747/blast-targets-police-bus-in-karachi-13-killed).

A few pointers are in order at this stage. Since the Taliban and the PML-N government started “peace dialogue”, the former have accelerated their terror campaign. In Karachi, they have been attacking people and places since day one of the “peace talks”. But in Peshawar, their terror campaign has been no less vile and destructive where just in one week they have attacked a cinema twice, attacked a Shia mosque and a hotel where Parachinar Shias like to stay, attacked a house where women were reciting the Koran, and attacked another house where a brother of an anti-Taliban elder lived (the elder was killed by the Taliban some time back). In all these attacks, scores of people have been killed, the Shias outnumbering the others—as usual.

The question is: Why would Chaudhry Nisar single out Karachi/Sindh, and stay mum about Peshawar/KP? The answer is too obvious: Sindh is ruled by the PPP, and the KP is ruled by the PTI. Imran Khan is one of the political faces of the Taliban, and, thus, destruction in Peshawar can conveniently be ignored. But since Sindh is ruled by the PPP, a different set of rules applies there, and ethical marauding is the ‘right’ thing to do. Thanks to the PML-N government’s brotherly adjustments with the Taliban, the latter are out of control now and have become more powerful than the PML-N government. Being Pakistan’s interior minister, it was/is Chaudhry Nisar’s responsibility to take on the Taliban, but he has been in the forefront of initiating “peace dialogue” with these Deobandi murderers.  His inability to deal with the Taliban cannot be interpreted merely as his ideological leaning towards them. This is true, but only partially so. He is extremely incompetent. Since he took over, he has not solved a single issue that he was supposed to. The Taliban strike everywhere at will, and he is helpless because he is incompetent. Now he wants to use the PPP as a scapegoat so no one will subject his own performance to criticism.

This much is clear. But what is difficult to understand is the role of the MQM. It should realize that the ground realities in Karachi have changed. Now Karachi is claimed by the Pashtuns too. It has become a city with the largest Pashtun population in the world. Amongst the Pashtun, who are not generally radicalized, live the Taiban. If the MQM goes along with the PML-N agenda to disenfranchise the PPP in Sindh, it will be a most cynical move on its part. It needs to realize that the Pashtun, the Taliban included, will never be a friend to the Mohajirs. The PPP/ Sindhis have lived with the MQM/Mohajirs despite all the ups and downs in the past. Thus, the PPP/Sindhis are natural allies of the MQM/Mohajirs. The MQM should not sit on the fence and watch the PPP decimated by the PML-N-Taliban axis. Once the PPP is neutralized, the MQM will be the next in line. It is time for the MQM to show maturity.