“Threatening pamphlets claiming to be from the Punjabi Taliban were found in the office of our key witness, whose name cannot be disclosed for security.” Shamoon Gill, spokesman of APMA, told AFP.
He said the pamphlets had warned the witness to “stay away from the case or get ready to be eliminated along with his family.”  “He is terrified, he continues changing his place and faces serious life threats,” Gill said.
The witness is supposed to appear before an anti-terrorism court on February 19.  Paul Bhatti, brother of the former minority minister who had also served as a federal minority minister after his brother was gunned down, is the complainant in the case. He is currently in Italy after facing warnings from extremists that he too would be murdered.
His lawyer Rana Abdul Hameed said his absence from the country has affected progress of the case. Hameed said he too had received death threats but would stand up to extremists and bring the trial to its logical conclusion. “I constantly receive death threats but I have pledged myself to pursue the case,” he said. THE NATION

The other day I was sent copies of threat letters that were sent to key witnesses in the murder case of Shahbaz Bhatti Shaheed. They were similar to the ones that were showered on the site where Shahbaz was assassinated calling the witnesses “Malaoon” “Kafiro” and “Laanatio” . It felt like deja vu. After nearly three years of losing Shahbaz our family and the leaders of his organization All Pakistan Minorities Alliance were facing the same threats which had claimed the life of not only our hero but also one of the assets of Pakistan. When faced with a situation where you have to choose between justice for the one you loved so dearly and the protection of the people who are selflessly putting their lives on the line to ensure justice is exercised: Which do you choose? 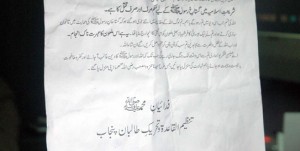 Shahbaz chose death over his life. Shahbaz knew he would die and besides being offered refuge by different countries he chose to live in Pakistan. The cause of justice and freedom for the minorities of Pakistan was much more precious to him then his life. Yet the path of justice, truth and freedom is a narrow one, on which one has their life on the line every second of the way. Pakistan has been corrupted from the roots up by an ideology that is based on hate and fanaticism. This ideology is not an old one we all have become very familiar to it or rather immune to it. The near war havoc state of our country has become natural to us. We have accepted the idea that this is the way things will be and nothing can change. That “This” is Pakistan. NO! this is NOT Pakistan. This is not the Pakistan Shahbaz nor Salman Taseer nor our ancestors died for.

The threat letters were released by Tehreek e Taliban e Punjab o Lashkar e Jhangvi.  One of the culprits Hammad Adil caught for planting explosives in a car was found to have been also involved in the murder of Shahbaz Bhatti. Janood e Hafsa which is also a part of LeJ was responsible for the Peshawar Church bombings that claimed the lives of so many innocents. Commander Asmatullah Muavia launched Janood-e-Hafsa before becoming the ameer of the Punjabi Taliban. Muavia had launched Janood-e-Hafsa (the fist or union of the Jamia Hafsa) to avenge the killing of Maulana Abdur Rasheed Ghazi and his followers in the July 2007 military operation against the fanatic clerics of the Lal Masjid in the heart of Islamabad. The prime aim of the Janood was to target the military and the intelligence agencies as well as their headquarters, foreign dignitaries, the religious minorities and the Shia community. All of these organizations are carrying forward the same message of radical hate in the name of Shari’a. They claim to be the protectors of Islam.  A good number of Pakistanis believe in their cause and methods of enforcing Islam and “purifying” the land of the pure- Pakistan. Many have tried to speak up and their voices have been silenced. Some are known to us where as millions are unnamed heroes, who have died in the most tragic ways possible and they remain only a number to us.

When Shahbaz was assassinated there was an uproar in the country against this injustice, and I am truly grateful to the people who raised their voices for him. But the same thing is being repeated again, what are we the nation of Pakistan going to do about it? Are we going to sit behind our computers, read the reports, shake our heads and say  “This is so sad, Ab Pakistan asa he hai” Or are we going to come out on the streets and say enough is enough no more blood! Enough of our Shias, Christians, Hindus and Sikhs have died. Pakistan has bled for long enough. The youth of Pakistan all over the world are responsible for the future of our country. But is there hope for us when it is in the hands of people who want to hold peace talks with forces that have threatened and killed our loved ones, with organizations that have never and will never believe in peace?

If we want a free and peaceful Pakistan we have to eradicate elements that have destroyed our country and snatched our loved ones from us. We CANNOT afford to negotiate and appease our enemies. We have to stand up and speak up against these forces. We have to demand that our government not cater to the unjustified demands of these culprits but bring them to justice. We do not want victims behind bars but criminals.

“In keeping silent about evil, in burying it so deep within us that no sign of it appears on the surface, we are implanting it, and it will rise up a thousand fold in the future. When we neither punish nor reproach evildoers, we are not simply protecting their trivial old age, we are thereby ripping the foundations of justice from beneath new generations.”  -Aleksandr Solzhenitsyn

LINK to the NATION news :http://www.nation.com.pk/national/09-Feb-2014/threats-hamper-shahbaz-bhatti-s-murder-trial