According to media report, the 5th edition of Karachi Literature Festival (KLF) began in Karachi at the Beach Luxury Hotel (5-9 Fev 2014), which will have 100-plus sessions featuring 200 speakers from 11 countries. It has been reported that “intelligent looking men engrossed in animated conversations with women clad in crisp pure cottons with motifs inspired by Pakistan’s traditional arts, wearing kolhapuri chappals and sporting white stylised hair, the venue is teeming with Pakistan’s intelligentsia. For once, even if for a short three days, the topics of discussion here are education, language, literature and the arts.”

In the meanwhile, Pashtuns in FATA and KP, Balochs and Shia Hazaras in Quetta, Sunni Barelvis and Shias in Karachi, and Ahmadis and Christians in Punjab continue to collect deadbodies of their dear and near ones target killed by variously-named Deobandi militant outfits. Art is long but not long enough to grasp the depth of unending miseries of Shia, Sunni Barelvi, Pashtun and Baloch women, men and children? Art and culture are expected to be relevant to a society in which and for which they are being constructed. No?

I have a few questions:

Was there a single session in the KLF (Karachi Literature Festival) in which Deobandi ASWJ-TTP terrorism was CLEARLY discussed and its implications for Sunni Barelvis, Shias, Ahmadis, Christians, Hindus and Sikhs of Pakistan debated?

Was any attempt made to understand the adverse implications of State-sponsored Deobndi militancy for Balochs and Shia Hazaras of Balochistan, Pashtuns of FATA, Saraikis of D.I.Khan and Muhajirs of Karachi?

Did any philosopher try to explain why there remains a Nazi style silence in Pakistani media, both (liberal) English and (Islamist) Urdu media, on the intolerant Takfiri Deobandi ideology and its impact on the fabric of Pakistani society?

Was any attempt made to explain the silence or obfuscation in Pakistani media, literature and socio-political discourse on Deoband identity fo TTP-ASWJ terrorism and Shia, Sunni Barelvi etc identity of victims? Did anyone bother to explain why rights groups and media persons highlight the Hazara identity of Shia victims of Balochistan but delete the Deobandi identity of ASWJ-SSP terrorists? Did anyone care to explain why Deobandi terrorism against Sunni Barelvis and Shias is obfuscated in false binaries of Sunni-Shia sectarian violence and Iran-Saudi proxy war?

Did any scholar try to explain why liberals such as Nadeem Paracha, Sherry Rehman and Sharmeen Obaid-Chinoy remain vague or silent while Ahmed Noorani and Zaid Hamid as well as Sunni Barelvi and Shia clerics of SIC, ST and MWM clearly and vocally condemn Takfiri Deobandi terrorists of ASWJ-TTP?

Was there any poet who recited poems on Ibtihaj, Mehzar Zehra or Aitzaz? Anyone who made a painting of Rukhsana Bibi, Mian Rashid Hussain and Sifwat Ghayur?

Was any attempt made to explain why right-wing Deobandi Islamists and many “liberals” seem to be equally vague and disoriented when it comes to clear condemnation of terrorism and practical approaches to deal with this menace?

Was any attempt made to understand why whisky-speaking Punjabi and Muhajir generals continue to radicalized Deobandi Pashtun and Baloch children as Jihadi proxy warriors in pursuit of imaginary strategic depths in Afghanistan and Kashmir? 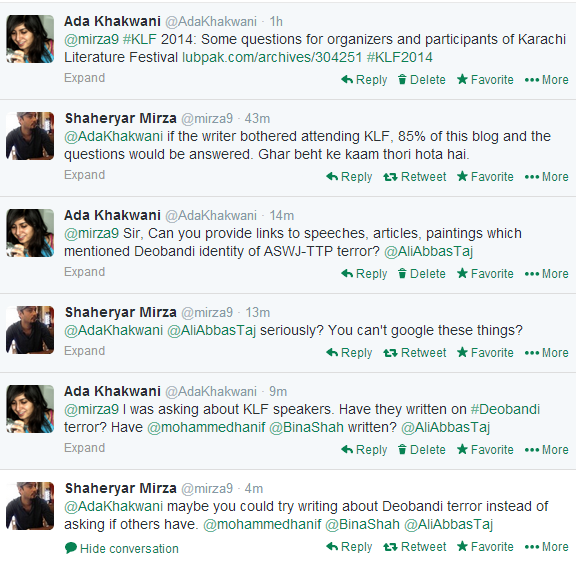 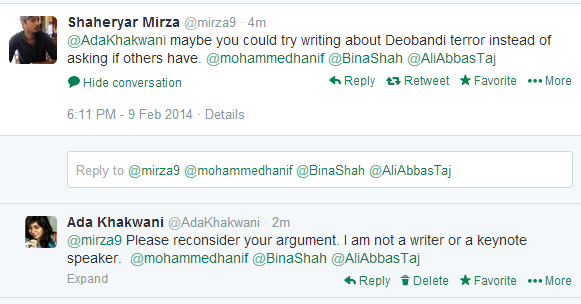