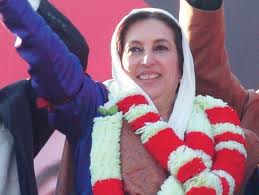 In 2007,two movements took place in Pakistan.One belongs to the poor working class and the second belongs to the lawyers.Hundreds of non civil society people were in one movement and the same number of civil society was in the other one.The aim of one movement was to achieve bread, butter, education, medical and other fundamental human necessities and the aim of other movement was to restore the ® Chief Justice of Pakistan.One movement’s goal was to achieve the revolution and the other movement’s goal was to restore the reforms.One dream was to change the current system with revolutionary spirits and the other’s was determine to sustain the current system with all its brutalities.

The brutal assassination of Benazir Bhutto on 27th December did not happen as a surprise,but it was planned and executed by the then sovereign powers whom were afraid from the masses.On her arrival on 18th October,2007 our media, the right wing and so called left wing intellectuals were having a unanimous opinion that people will not come in large number to welcome BB Sahiba,but more that 3 million people proved all the corporate assessments wrong.They didn’t come to watch her rather they want her to watch them as they came after the unfinished legacy of 1968-69 to prove their unanimous revolutionary voice against the dying capitalist system and its brutalities.They gave power to BB Sahiba and the NRO was torn by the feet of these masses. This gave BB Sahiba a very strong message that people want a radical change and it was due to this mass pressure that she began to radicalize in her political rallies after the tragic Karsaaz incident.

Till her last speech in Rawalpindi she kept on saying to the people that a time has come for the radical change and lets fight together to save our motherland from the darkest powers of the fundamentalism and fanaticism.She also took oath from the PPP political persons to serve the people if they will come into the power.But unfortunately PPP didn’t act according to the laid principles by their great leaders.The policy of reconciliation was introduced and the Zia’s remnants brought on the top positions.The masses saw this and took revenge with PPP in 11th May elections.

Today’s question is this that will this be continued for ever?the answer is no and never.The time is very near when the revolutionary working class will rise and this time they will participate in the radical change and will not be fooled by the puppets of this dying and rotten capitalist system and only by then the dream of Z.A Bhutto and BB Sahiba to build the classless society on the principles of Socialism will come true through the revolution.