The following images have been captured from the “Farooqi Markaz” hate page of Aurganzeb Farooqi, leader of banned terrorist outfit Sipah-e-Sahaba Pakistan (aka ASWJ). Images of other hate pages of SSP-ASWJ are also provided. 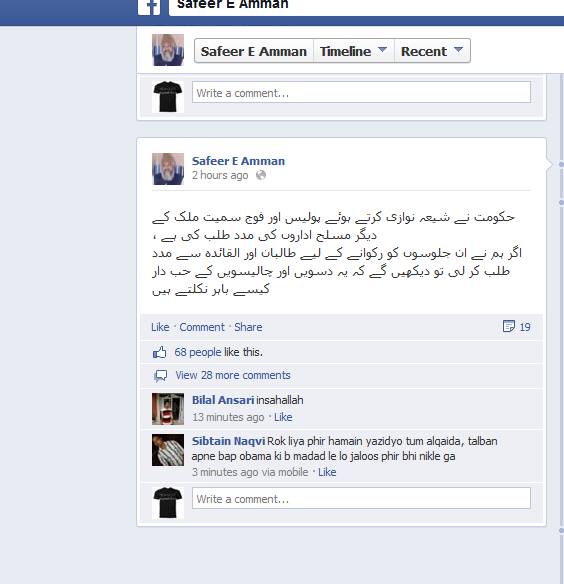 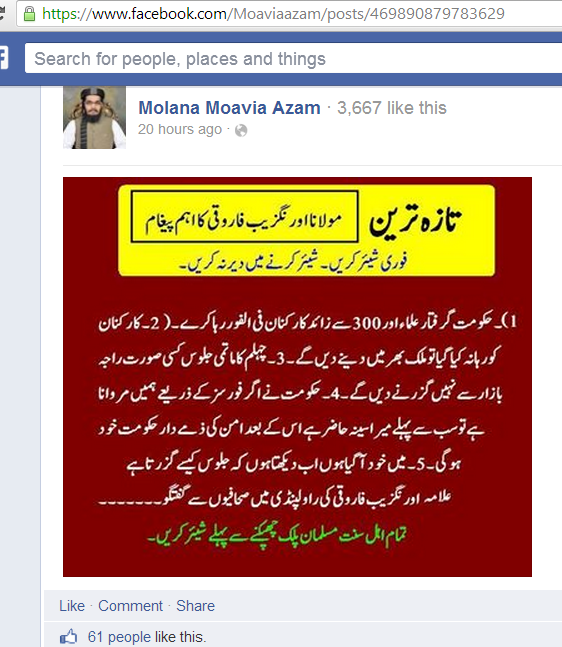 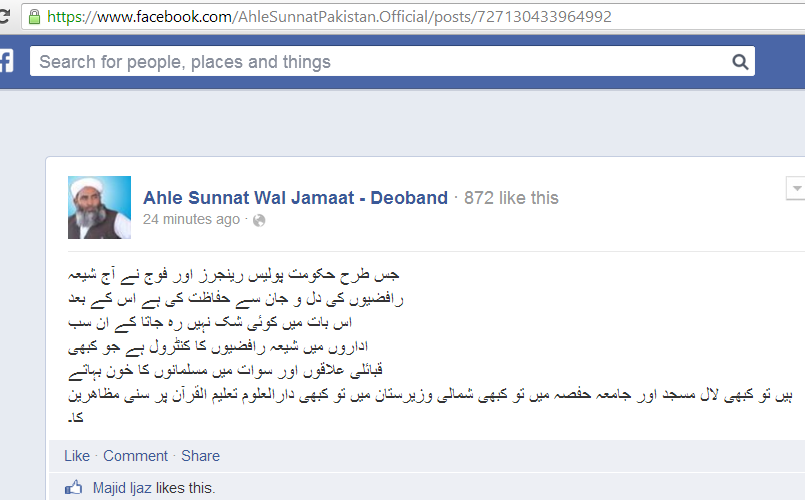 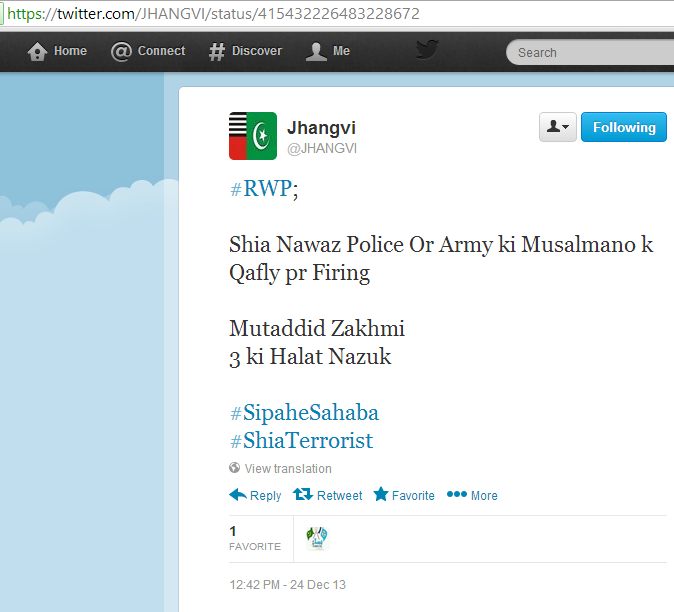 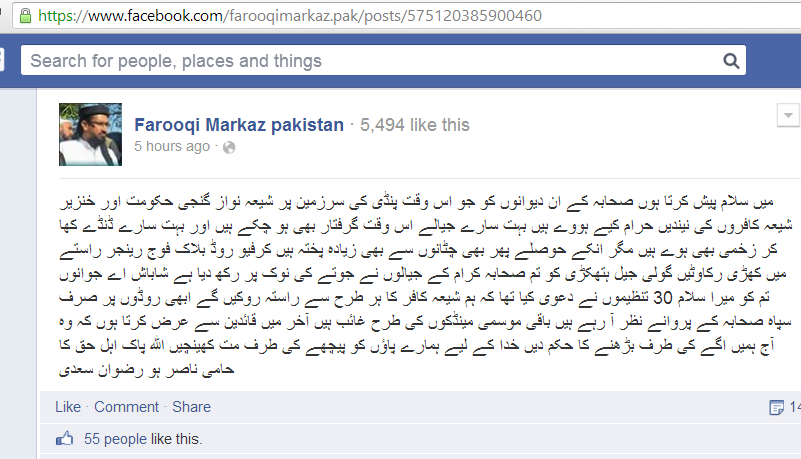 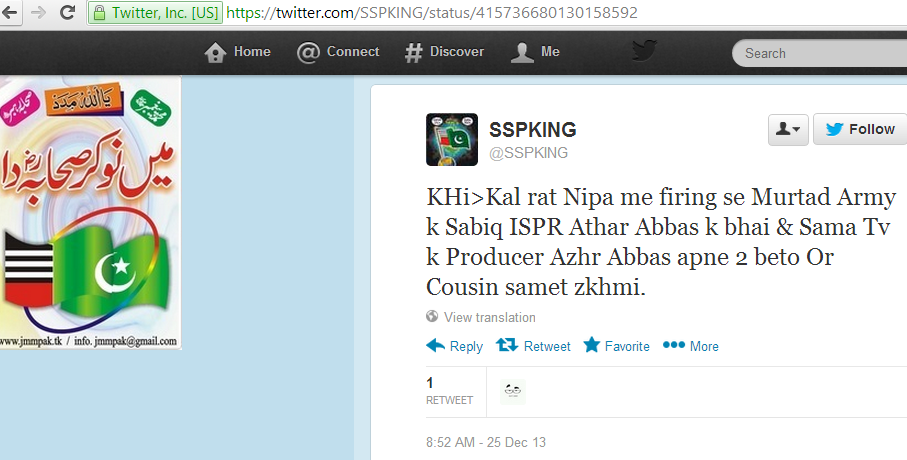 In clear, unequivocal terms, Aurangzeb Farooqi and other leaders of banned terrorist ouutfit SSP-ASWJ are threatening further violence against the Pakistani state. Frustated by their failure to unite other Deobandi groups to attack Shia and Sunni processions for the Holy Prophet (pbuhp) and his family, the ASWJ is openly threatening to attack State institutions (Army, police) with the help of their Taliban and Al Qaeda partners.

Pakistan’s hypocritical civil society is nowhere to be found in condemning these fascists and terrorists. Pakistan’s much trumpeted “independent” media is too busy supporting the same terrorist organizations like ASWJ. Pakistan’s foremost pro-Taliban TV anchor and diehard supporter of corrupt PCO judges, Hamid Mir does not even bother to ask ASWJ any challenging questions – like his fake liberal friends at The Friday Times who publish ASWJ hate speech uncontested.

From PML N to PTI who are hand in hand with ASWJ to PPP, ANP and MQM who are completely spineless in confronting these groups, all are complicit in their silence against the open incitement to violence and terrorism by ASWJ.

We request all readers to circulate this post and to bring it to the attention of so-called liberal champions and media dons on social media. Why are these people silent when Aurangzeb Farooqi and ASWJ are openly engaging in terrorist planning on social media?

Ask these fake liberal champions and media dons to utter more than euphemisms that deliberate hide the ideology (Takfiri Deobandi) and name (ASWJ/Sipah Sahaba) of groups that are threatening terrorism against the State itself.

These pseudo liberals and media bullies need to be challenged on their obfuscation and False Neutrality. Surely, this issue is more important that the NSF vs Jamaat Islami politics that took place in some university canteen in 1983. Are you listening, Mr. Nadeem F. Paracha? 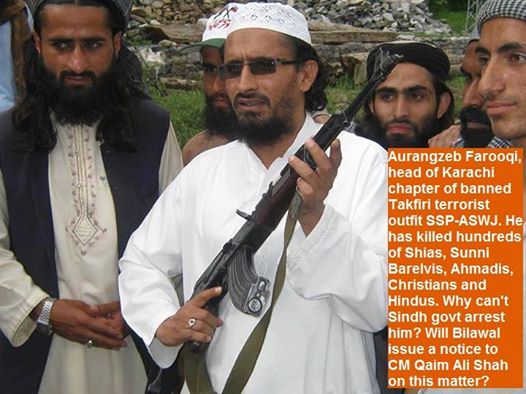