1. “Killing oneself is a grave crime and a grave sin.”

2. “Those who kill themselves with explosives are criminals who are hastening their way to hell.”

3. “Their (suicide bombers) hearts have veered away from the right path, their minds have been invaded by evil.”

4. “They have been exploited in order to cause destruction to themselves and society.”

While the fatwa was welcome by moderate Sunni and Shia Muslims in Saudi Arabia and other parts of the Muslim world, particularly by the Pakistan government which has suffered greatly at the hands of suicid bombings by banned Deobandi militant outfits namely Sipah-e-Sahaba Pakistan (SSP, aka ASWJ) and Taliban (TTP). However, within minutes of the fatwa’s being reported on mainstream media, the leaders and supporters of Pakistan’s banned terrorist organizations, Sipah-e-Sahaba Pakistan (SSP) and Lashkar-e-Jhangvi (LeJ), now operating under the name of Ahle Sunnat Wal Jamat (ASWJ), came out openly ridiculing and insulting the Grand Mufti.

For instance, Aurengzeb Farooqi, the Karachi-based leader of the ASWJ, poured insult and ridicule on the Grand Mufti by saying that the fatwa had no significance. He asked the government of Pakistan to also procure a fatwa from the Grand Mufti about the Moharram and Prophet Muhammad’s (PBUH) birthday (Milad) processions. Reading his reaction, it is clear that he thinks that the Grand Mufti is a type of man whose fatwas are on sale. He also ridiculed the Pakistan Army by saying that it should obtain fatwas from the Grand Mufti when next time it starts an operation against the Taliban terrorists. Calling the fatwa a “dud coin”, he also sarcastically noted that “the philosophy of love resulting from the fatwa” will not lead the Pakistan Amy anywhere. Clearly, the Deobandi militants of SSP-ASWJ-TTP want to continue to kill innocent people in the name of Islam. 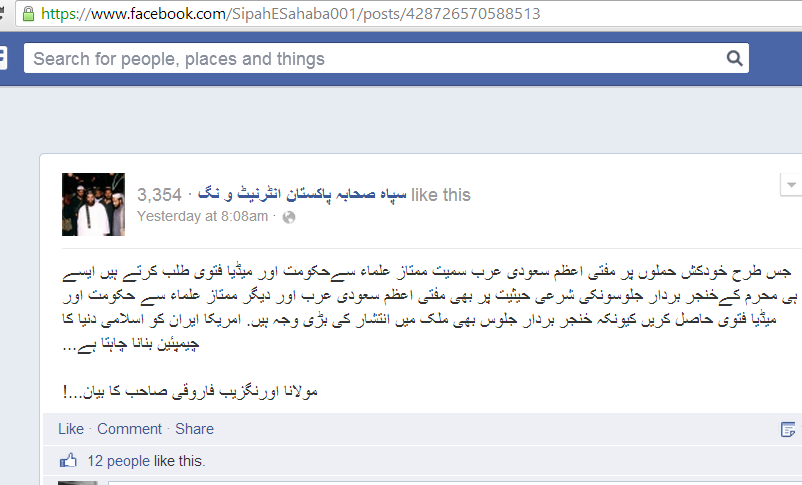 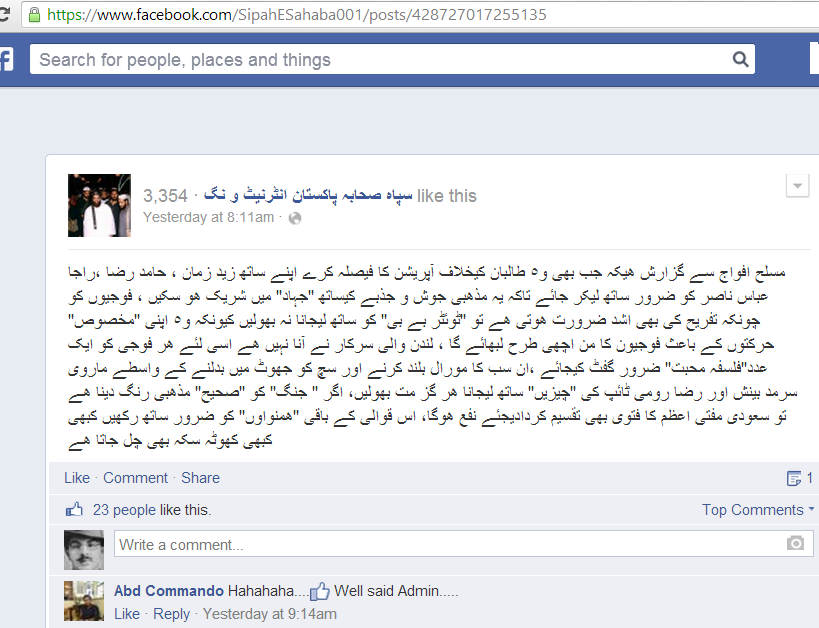 It is important to note that Deobandis are Sunni Hanafi Muslims, i.e., they follow Imam Abu Hanifa while Salafis (or Wahhabis or Ahle Hadith) of Saudi Arabia are ghair-muqallid, i.e., they don’t follow a particular Imam of Sunni Muslims.

Another pro-Taliban pro-SSP-ASWJ Deobandi website, Ibn Haram, ridiculed the Grand Mufti by calling him a “Church-lover”. The Deobandi protal described the the Mufti an agent of the U.S.A. 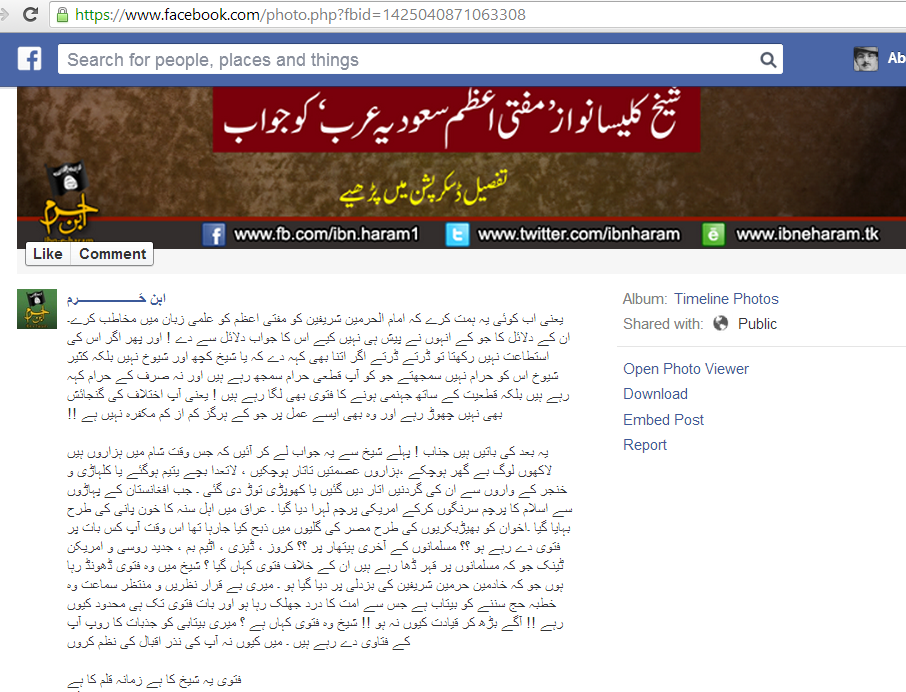 While one commends the fatwa of the Grand Mufti, one also sadly notes that the Frankenstein’s Monster carefully nourished by the Saudi Arabian government seems to have gone out of its creator’s control. In the past, every word of even an ordinary Saudi religious entity was sacrosanct for the Takfiri-Deobandis of ASWJ-SSP and TTP, but now these Takfiris seem to have grown bold and confident and are ready to take on even the Grand Mufti and the Saudi government. They are not willing that anyone, be it even the Saudi government, is allowed to put a plug on their bloodthirsty campaign against Shias, Brelvi Sunnis, Ahmadis, Christians, and Hindus. It needs to be noted that ASWJ-SSP hit-men have even killed those Deobandis who ‘erred’ when they called for a stop to the killing of Pakistanis in the name of religion. 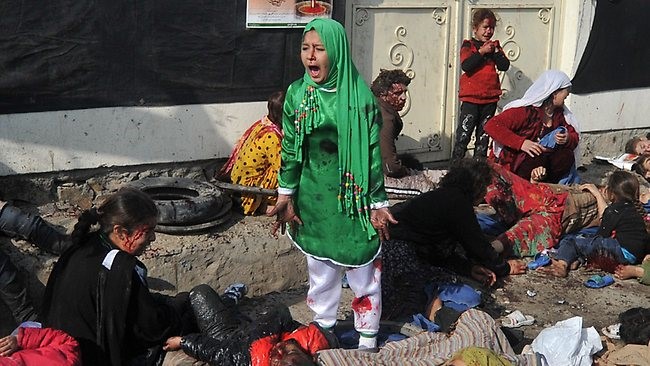 It must be a sobering time for Saudi Arabia’s political and religious establishment to realize that even after having spent billions of dollars on Deobandi militants in Pakistan, they have no credible clout with them. Those Deobandi terrorists who have rejected Saudi Mufti’s fatwa calling him a Church-lover American agent may also be expected to attack Saudi nationals as a ‘revenge’ for the Grand Mufti’s fatwa. In fact, Deobandi activists sympathetic to ASWJ-SSP and TTP may carry out acts of violence inside Saudi Arabia given the fact that Saudi Arabia is host to hundreds of Deobandi supporters and sympathizers.

But at the same time, we must note, the scorn heaped by the ASWJ-SSP on the Grand Mufti and the Saudi government by implication, can be a great opportunity for them.

It is high time that the Saudi government does the following:

1. Stop financial and moral support to Takfiri Khawarij Deoband militants and their madrassas.

2. Expel all the ASWJ-SSP affiliated hate-mongers from Saudi Arabia.

3. Convince the UAE and other Gulf governments to ban all Takfiri-Deobandi activities and expel their leaders.

5. Do not allow Takfiri Deobandis to come to Saudi Arabia and collect donations in the name of Islam.

6. Clearly sympathize the communities, such as Sunni Barelvis, moderate Deobandis and Salafis, Shias, who have been victim of Takfiri-Deobandi terrorism.

7. Make an explicit declaration that all sects of Islam, Salafis, Sunni Sufis, Shias, and Deobandis, are Muslim, and that their Takfeer (apostatizing) is forbidden.

8. Encourage countries like Pakistan not to affiliate with Takfiris. For instance, the Sharif Brothers ruling Pakistan at the moment are allies of the ASWJ. The Saudi government has immense influence on them. It can easily convince the Sharif Brothers to end their romance with the Takfiri-Deobandis.

9. As custodians of Muslims; holy places, the Saudi government is duty-bound to go an extra mile in promoting peace in the Muslim world. It can end hostilities with Iran and Iraq, and make a new beginning which will bring a good name to Islam tarnished by the Takfiri Deobandis. It will also elevate the stature of Saudi Arabia all over the world.

10. During Friday sermons, Saudi imams should be asked to promote sectarian harmony in the Muslim world.

Evil does not pay. In the end, evil consumes even its benefactors. The fatwa of the Grand Mufti is a good beginning. We in Pakistan hope that the Pakistani nation will soon see relief from the never-ending campaign of Takfiri-Deobandi terrorism. 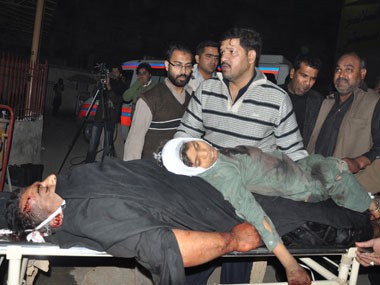