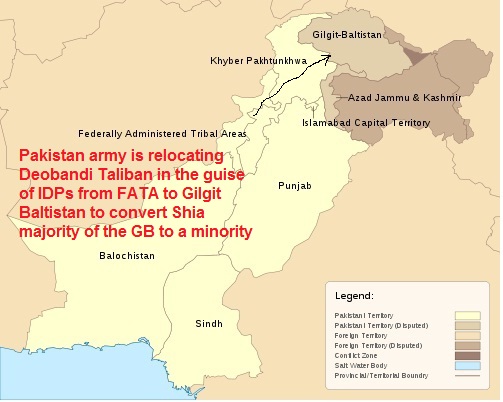 Taliban are being shifted from Waziristan to Hangu and Gilgit-Baltistan. This way, Pious Patriotic Puttar Fauj can literally kill two birds with one stone. These areas are launching pads for gaining strategic death, oops, depth into India and Afghanistan as well as teach the Shia majority in these areas a lesson for being peaceful and not wanting to use their areas to meddle into other countries. This will likely strain Pak-Cheen dosti and may cause it to go the way of Pak-Amrika dosti. However, no one can accuse our Puttar Fauj of long term thinking or watching out for the country’s interests. Such way of thinking is the way of sissies and not of Ghairatmands.

GILGIT: Mobile services were suspended in Gilgit early Wednesday morning after the death toll from incidents of violence reached three.

Fear and panic have gripped the area since Monday because of the killings.

The residents of the area are also facing trouble with accessing internet, however, no government official could be reached for confirmation due to communication problems.

Deputy Commissioner Shahbaz Tahir told The Express Tribune that security forces are working on a plan to curb violence and the suspension of mobile services is a part of it.

The official did not disclose details of the plan.

Tahir said the authorities are taking action against the trouble makers and that the writ of the government will be restored in the area.