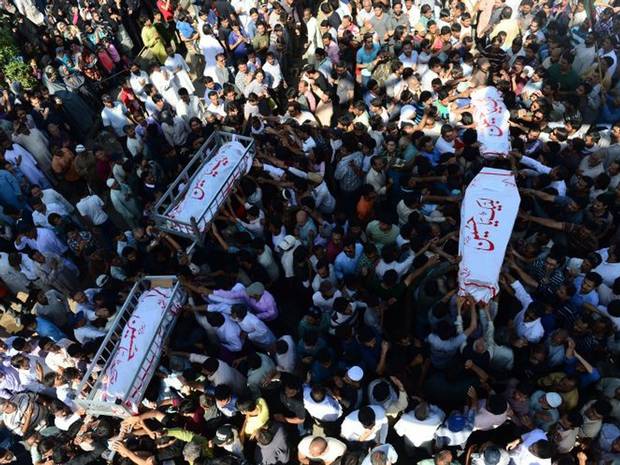 Donors in Saudi Arabia have notoriously played a pivotal role in creating and maintaining Sunni (Salafi Wahhabi and Deobandi) jihadist groups over the past 30 years. But, for all the supposed determination of the United States and its allies since 9/11 to fight “the war on terror”, they have showed astonishing restraint when it comes to pressuring Saudi Arabia and the Gulf monarchies to turn off the financial tap that keeps the jihadists in business.

Compare two US pronouncements stressing the significance of these donations and basing their conclusions on the best intelligence available to the US government. The first is in the 9/11 Commission Report which found that Osama bin Laden did not fund al-Qa’ida because from 1994 he had little money of his own but relied on his ties to wealthy Saudi individuals established during the Afghan war in the 1980s. Quoting, among other sources, a CIA analytic report dated 14 November 2002, the commission concluded that “al-Qa’ida appears to have relied on a core group of financial facilitators who raised money from a variety of donors and other fund-raisers primarily in the Gulf countries and particularly in Saudi Arabia”.

Seven years pass after the CIA report was written during which the US invades Iraq fighting, among others, the newly established Iraq franchise of al-Qa’ida, and becomes engaged in a bloody war in Afghanistan with the resurgent Taliban. American drones are fired at supposed al-Qa’ida-linked targets located everywhere from Waziristan in north-west Pakistan to the hill villages of Yemen. But during this time Washington can manage no more than a few gentle reproofs to Saudi Arabia on its promotion of fanatical and sectarian Sunni (Salafi Wahhabi and Deobandi) militancy outside its own borders.

Evidence for this is a fascinating telegram on “terrorist finance” from US Secretary of State Hillary Clinton to US embassies, dated 30 December 2009 and released by WikiLeaks the following year. She says firmly that “donors in Saudi Arabia constitute the most significant source of funding to Sunni Salafi-Wahhabi and Deobandi terrorist groups worldwide”. Eight years after 9/11, when 15 of the 19 hijackers were Saudis, Mrs Clinton reiterates in the same message that “Saudi Arabia remains a critical financial support for al-Qa’ida, the Taliban, LeT [Lashkar-e-Taiba in Pakistan] and other terrorist groups”. Saudi Arabia was most important in sustaining these groups, but it was not quite alone since “al-Qa’ida and other groups continue to exploit Kuwait both as a source of funds and as a key transit point”.

Why did the US and its European allies treat Saudi Arabia with such restraint when the kingdom was so central to al-Qa’ida and other even more sectarian Sunni Salafi-Wahhabi and Deobandi jihadist organisations? An obvious explanation is that the US, Britain and others did not want to offend a close ally and that the Saudi royal family had judiciously used its money to buy its way into the international ruling class. Unconvincing attempts were made to link Iran and Iraq to al-Qa’ida when the real culprits were in plain sight.

But there is another compelling reason why the Western powers have been so laggard in denouncing Saudi Arabia and the Sunni rulers of the Gulf for spreading bigotry and religious hate. Al-Qa’ida members or al-Qa’ida-influenced groups have always held two very different views about who is their main opponent. For Osama bin Laden the chief enemy was the Americans, but for the great majority of Sunni Salafi Wahhabi and Deobandi jihadists, including the al-Qa’ida franchises in Iraq and Syria, the target is the Shia. It is the Shia who have been dying in their thousands in Iraq, Syria, Pakistan and even in countries where there are few of them to kill, such as Egypt.

Pakistani papers no longer pay much attention to hundreds of Shia butchered from Quetta to Lahore. In Iraq, most of the 7,000 or more people killed this year are Shia civilians killed by the bombs of al-Qa’ida in Iraq, part of an umbrella organisation called the Islamic State of Iraq and the Levant (Isil), which also encompasses Syria. In overwhelmingly Sunni Libya, militants in the eastern town of Derna killed an Iraqi professor who admitted on video to being a Shia before being executed by his captors.

Suppose a hundredth part of this merciless onslaught had been directed against Western targets rather than against Shia Muslims, would the Americans and the British be so accommodating to the Saudis, Kuwaitis and Emiratis? It is this that gives a sense of phoniness to boasts by the vastly expanded security bureaucracies in Washington and London about their success in combating terror justifying vast budgets for themselves and restricted civil liberties for everybody else. All the drones in the world fired into Pashtun villages in Pakistan or their counterparts in Yemen or Somalia are not going to make much difference if the Sunni (salafi/deobandi) jihadists in Iraq and Syria ever decide – as Osama bin Laden did before them – that their main enemies are to be found not among the Shia but in the United States and Britain.

Instead of the fumbling amateur efforts of the shoe and underpants bombers, security services would have to face jihadist movements in Iraq, Syria and Libya fielding hundreds of bomb-makers and suicide bombers. Only gradually this year, videos from Syria of non-Sunnis being decapitated for sectarian motives alone have begun to shake the basic indifference of the Western powers to Sunni Salafi-Wahhabi and Deobandi jihadism so long as it is not directed against themselves.

Saudi Arabia as a government for a long time took a back seat to Qatar in funding rebels in Syria, and it is only since this summer that they have taken over the file. They wish to marginalise the al-Qa’ida franchisees such as Isil and the al-Nusra Front while buying up and arming enough Sunni war-bands to overthrow President Bashar al-Assad.

The directors of Saudi policy in Syria – the Foreign Minister Prince Saud al-Faisal, the head of the Saudi intelligence agency Prince Bandar bin Sultan and the Deputy Defence Minister Prince Salman bin Sultan – plan to spend billions raising a militant Sunni(salafi/deobandi) army some 40,000 to 50,000 strong. Already local warlords are uniting to share in Saudi largesse for which their enthusiasm is probably greater than their willingness to fight.

The Saudi initiative is partly fuelled by rage in Riyadh at President Obama’s decision not to go to war with Syria after Assad used chemical weapons on 21 August. Nothing but an all-out air attack by the US similar to that of Nato in Libya in 2011 would overthrow Assad, so the US has essentially decided he will stay for the moment. Saudi anger has been further exacerbated by the successful US-led negotiations on an interim deal with Iran over its nuclear programme.

By stepping out of the shadows in Syria, the Saudis are probably making a mistake. Their money will only buy them so much. The artificial unity of rebel groups with their hands out for Saudi money is not going to last. They will be discredited in the eyes of more fanatical jihadis as well as Syrians in general as pawns of Saudi and other intelligence services.

A divided opposition will be even more fragmented. Jordan may accommodate the Saudis and a multitude of foreign intelligence services, but it will not want to be the rallying point for an anti-Assad army.

The Saudi plan looks doomed from the start, though it could get a lot more Syrians killed before it fails. Yazid Sayegh of the Carnegie Middle East Centre highlights succinctly the risks involved in the venture: “Saudi Arabia could find itself replicating its experience in Afghanistan, where it built up disparate mujahedin groups that lacked a unifying political framework. The forces were left unable to govern Kabul once they took it, paving the way for the Taliban to take over. Al-Qa’ida followed, and the blowback subsequently reached Saudi Arabia.”