Aside from Shia sources, a host of Sunni Barelvi and Deobandi sources and independents journalists have confirmed that the Ashura violence against Shias and Sunni Barelvis was pre-planned by terrorists of a banned Deobandi outfit namely Sipah-e-Sahaba Pakistan (SSP aka ASWJ). These sources include but are not limited to detailed, objective and specific analyses and reports by Ahmad Noorani, Baqir Sajjad, Tahir Ashrafi, Sheikh Rasheed, Sunni Barelvi clerics and the the Joint Intelligence Team’s report.

Sadly, Dr Taqi blames both the aggressor and the victim.

The destruction of the mosque-madrasa complex and murder of 10 men associated with that entity, apparently by some from within the procession, must be squarely condemned. There is no excuse for murder and mayhem. The same goes for those who ravaged several imambargahs later on. As abhorrent as the incidents were, they still seem to have happened because of a breakdown in law and order and classic tit-for-tat sectarian. http://www.dailytimes.com.pk/default.asp?page=2013\11\21\story_21-11-2013_pg3_2

By falling into trap of the false neutral position and the Sunni-Shia binary, Dr Taqi ascribes blame to the vicitm, i.e., the attacked party (the Shias and Sunni Barelvis) instead of limiting it to the clearly identification and condmenation of the planners and perpetrators of this violence.

My question to Dr. Taqi, did he not see the  tweet on 9 Muhurrum ul Haraam from ASWJ twitter account seen by thousands to invite activists for fitna khori at this mosque?

My second question to Dr. Taqi, did he not see the firing from the roof top of the Madrassa or the brick throwing all caught on video? What would Dr. Taqi do if he was attacked in this manner? Would he resort to self defense or would just eat the bullet in the interest of keeping fake liberals happy?

Dr. Taqi’s description of the incident on Twitter and in his column is both vague and lacking in crucial details. For instance, no Juma Khutbah, anywhere in Pakistan lasts till 2:30 pm especially when they are starting at noon in the winter time.  Dr Taqi fails to mention that the Deobandi cleric’s speech was insulting not just to Shias but also to Sunnis because of his glorification of tyrant Caliph Yazid and his insult to Imama Hussain and holy Prophet Muhmmad (pbuhp)’s family.

Here is the transcript of the Friday Khutba https://lubpak.com/archives/291549.

Once again it is sad to see Dr Taqi fall into this trap of false nutral position, especially by someone with pronounced anti-establishment writings, to share the same position of fake liberals in this matter. Dr Taqi should have also written about those Sunni Muslims who defended scores of Imambargahs in Rawalpindi and other areas of Pakistan from attacks by Deobandi terrorists. Those who misrepresent these events in Sunni-Shia binary terms are missing the central point, i.e., that if ASWJ Deobandi terrorist are attacking Shias, they are also attacking Sunni Barelvis, Christians, Hindus and other communities. How can then anyone describe the Pindi incident in Sunni-Shia terms? 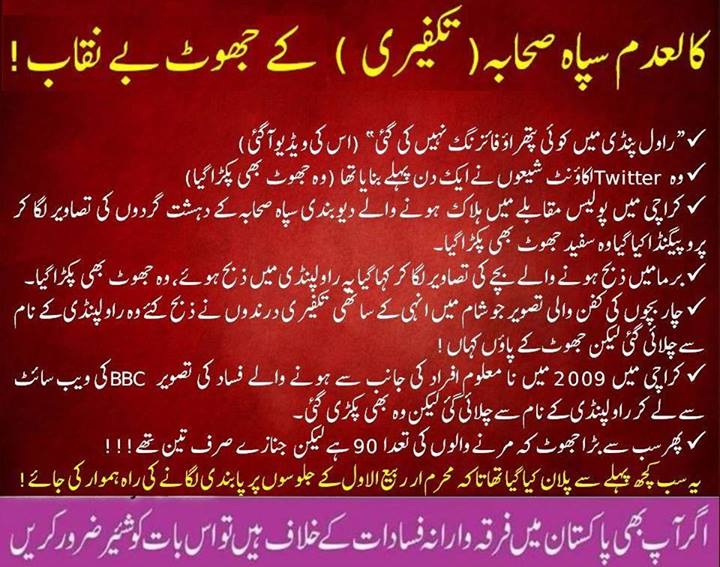