LUBP Editor’s note: Political differences apart, Ahmad Noorani (investigative reporter of Jang Group) is one journalist who has earned our utmost respect because of his bold, honest coverage of the Ashura day violence in Rawalpindi. Mr Noorani clearly demonstrated that he is above sectarian bias by clearly apportioning blame on ASWJ Deobandi terrorists who pre-planned the attack on Ashura procession of Shia and Sunni Barelvi Muslims. Mr Noorani also held the procession participants responsible for the violence in the aftermath of the ASWJ Deobandis provocation. We respectf his opinion. In the past, we have been misled by some articles in which Mr Noorani was wrongly painted as a sectarian bigot which, clearly, he is not. We apologize to Mr Noorani on any past remark in which his sectarian neutrality was questioned. Non-sectarian, professional journalists such as Mr Noorani deserve appreciation and support by all Pakistanis including Sunni, Shia etc. We reiterate our position that Sunni Shia unity against Takfiri Khawarij terrorists is the only way to save Pakistan from further destruction. (end note).

A Friday story wil expose how SSP/LeJ working under name of ASWJ. Basic reason of their success is they portray themselves as “Sunni” and thus try to establish they represent majority in Pakistan, which is wrong. This help them in fooling youngsters who later join Taliban.

After being badly exposed for planning 10th Moharram conspiracy and inciting violence by circulating fake pics @ASWJPak has deleted its 6000 tweets &only 10 to 15 tweets can b accessed now. Images/print-screens of all tweets, forensically verified, r saved &wil b shared

The Judicial Commission and fact-finding committee on the unfortunate Pindi incident has to find answers to six basic questions after a statement by the provincial law minister on Tuesday made a failed attempt to make both these forums controversial.

These questions are crucially important and their answers would help get rid of such situations in the future. Ignoring them could cause irreparable damage.These questions are in addition to questions on the performance and failure of the intelligence agencies and police and are also being raised by some LEA officials. These are:

1- Everyone agrees to the fact that even if the Madrassa people had planned to stop the procession, or there was a provocative speech, there is no justification whatsoever of killing people or setting a mosque on fire. It really needs to be investigated what led the people in the procession to become so violent. It also needs to identify the actual people who set the mosque on fire as, in fact, in different videos, the processionists can be seen trying to extinguish the fire.

2- The basic question is: was it a spontaneous incident fuelled on the spot or had any of the parties pre-planned it? Some social media announcements, including some tweets posted one day prior to the incident, that is on the 9th of Muharram (November 14, 2013), were inviting people to reach this Madrassa so that the 10th Muharram procession could be stopped forcefully. This could be the greatest evidence as the date and time on these sites cannot be changed. An organisation, the ASWJ, which controls the attacked seminary, denies handling these Twitter accounts. This makes the whole thing more intriguing and it would be more helpful for the ASWJ as it will be cleared of all the allegations if its claim is proved and the real criminals using these accounts, who created this situation on the 10th of Muharram and announced it in advance, would be exposed. There could be a possibility that those who set the building on fire were also behind making this announcement to create the unrest. This can make a big breakthrough. Merely finding those people killed when the riots erupted will not help.

3- Is it true that the people in the procession asked the police to stop the speech of the cleric in the mosque attached with the Madrassa at a time when there was no disturbance of any kind and clashes started only after the police had failed to stop the cleric’s speech?

4- Is it true that the speech of the cleric was really unsuitable for the occasion when the procession of the 10th of Muharram was nearby? Or is this untrue, as in his interview the young cleric has denied that his speech was provocative?

5- Why did the ASWJ spread fake pictures of victims of the incident from its official accounts? Some pictures of the slaughtered people circulated on the internet from the official account of the ASWJ were proved fake electronically beyond any doubt as these were already present on the internet for the past many months and the old dates verify the same.

6- The place where the incident took place has been considered sensitive since decades and intelligence reports sent to provincial and district managements were routine reports with simple mention of a threat of violence. This is the biggest question which needs an immediate answer: when miscreants openly announced their plan and the exact place 17 hours prior to the incident, why did the elite intelligence agencies fail to trace the same and report it?

First Rana Sanaullah said “procession attacked madrassah”,a point judicial comm has to determine while now he says ppl are arrested by seeing videos – whereas those who planned attack are not on video & hate speech which caused riots is on audio NOT video. #Strange. Also no action has been announced against those which spread hate on Social Mediam announced that kids are slaughtered & shared fake pics

ZIA ‏@XIApk 3h (Retweeted by Ahmad Noorani)
Yes @Ahmad_Noorani bhai as I said gov should ban SSP frm using the name ASWJ which is a name of majority Muslim sect. 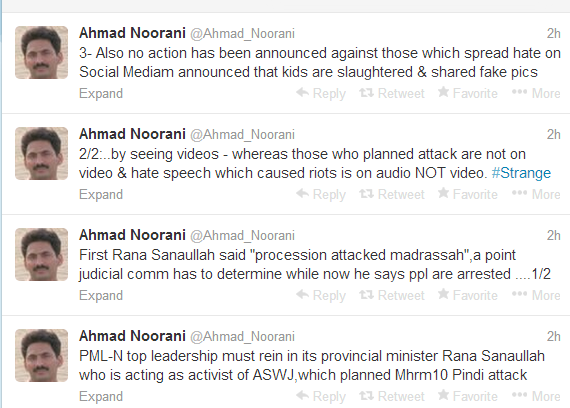 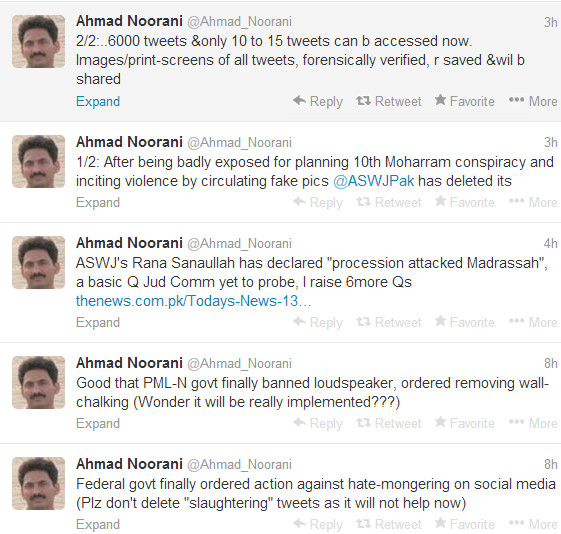 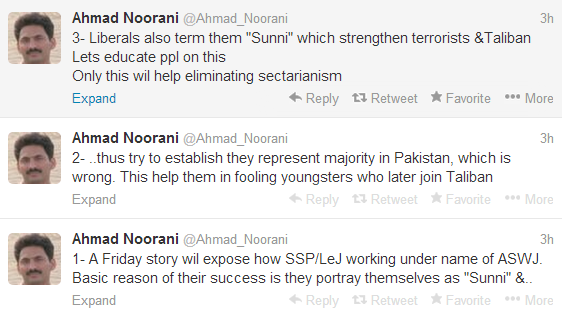