Home  »  Featured • Original Articles   »   Saudi-backed Salafi-Wahhabi terrorist insults Lady Mary, one of the most respected ladies in Islam and Christianity 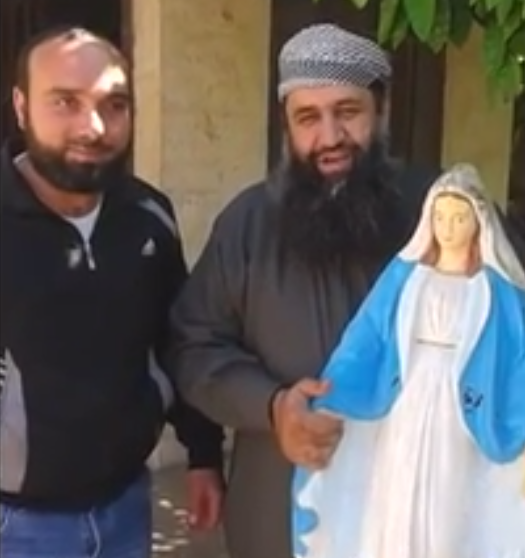 LUBP strongly condemns this hateful act. It is about time that the world stops using vague and generalist terms like “Islamists” to describe the Slafi-Wahhabi and Deobandi extremists responsible for this and other similar atrocities. The Global Wahhabist agenda (in Pakistan, the primary Wahabi partners are Takfiri Deobandis) has shown a virulent hatred against Christains – be it Pakistan, Egypt, Iraq and now Syria. When the culprits themselves boast about their beliefs, why is the specific identity being obscured?

In the Quran, no other woman is given more attention than Mary and the Quran states that Mary was chosen above all women:

Some comments from the hearts of Muslims troubled by this hateful Wahhabi Salafi act:

The destroyed statue of Virgin Mary smiled to the savage extremist who crashed it and said: go and read in Quran, then you will realize that you can destroy all my icons and statues but you can never remove a letter of my chapter “Sura” from the holy Quran, and you can never deny that it is one of the most beautiful chapters!

No doubt, the story of Mariam (sa) (Mary) is one of the most beautiful in the Quran!!!But also there is no doubt that a wahabi/salafi has no respect for the Quran or Mary as they are satanists!!!Allah protect the poor suffering Syrian people- be they Christian, Muslim, Jew (or anyone) protect the honor of their daughters and sisters, protect their lives protect their children, and bring swift destruction on their Zionist, illuminati and wahabi/Salafi attackers!!!

These excerpts from a 2012 interview with Omar Gharba’, a Wahhabi cleric and member of the US-backed “Free Syrian Army” (FSA) who recently smashed a statue of the Virgin Mary in Idlib,