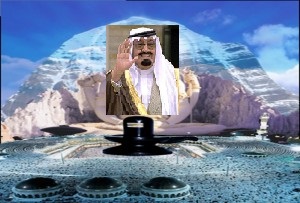 After conquering Mukkah, the Holy Prophet of Islam (PBUH) destroyed all the idols which had been placed in the Ka’aba, the House of Allah. As he destroyed one idol after another, he recited the following Koranic verse,

“Say, the truth has arrived, and falsehood perished. Verily, the falsehood is bound to perish”. (Al-Koran, 17: 81).

The Prophet (PBUH) left this world after completing the message of God. But through him (PBUH), God clearly informed humanity that the completion of His message did not mean that there would be no evil in this world. Evil, as the Koran has warned Muslims, will continue as long as humanity exists. There will be people who will remain on the side of Satan. The mission of these diabolical people will be to spread evil by any means. Here is the Koranic reference to it,

(Iblis/Satan) said: “O my Lord! Give me then respite till the Day the (dead) are raised.” (God) said: “Respite is granted thee till the Day of the Time appointed.” (Iblis) said: “O my Lord! Because Thou hast put me in the wrong, I will make (wrong) fair-seeming to them on the earth, and I will put them all in the wrong, Except Thy servants among them, sincere and purified (by Thy Grace).” (God) said: “This (way of My sincere servants) is indeed a way that leads straight to Me. For over My servants no authority shalt thou have, except such as put themselves in the wrong and follow thee.” (15: 36–42)

The history of the Salafi House of Saud is one of utter destructiveness and malignancy since it occupied the land known as Saudi Arabia in 1922. Obsessed by the literalist-fascist interpretation of Islam, the House of Saud has undermined every aspect of Islam. First, it began by destroying the local Sunni and Shia cultures by banning cultural practices of these two sects of Islam. That was followed by physical elimination of the Shias. Interestingly, the source of the Saudi wealth today, oil, is found in the eastern parts of the country which has been a Shia-dominated area. Since the discovery of the oil, the Saudi-Salafi tyrants have been forcing the Shias to move out to other areas. In order to do destroy Shia identity and culture, the Saudis have been imposing one restriction after another on them. They are allowed few human rights. The following article chronicles subhuman conditions in which the Shias of Saudi Arabia have to live:

But it is not the Shias who have faced destruction at the hands of the Saudis. The Salafist ideology has single-handedly destroyed everything which stands for Islam. Even the Koran has not been spared by the House of Saud. Calling this subversion of the Koran “the Wahabi Koran”, Stephen Schwartz has noted,

As if the subversion of the Holy Koran was not enough, the Saudis have obstinately been destroying Islamic heritage. Take the house of Bibi Khadija, the first wife of the Prophet (PBUH), for example. This was the place where the Prophet (PBUH) received a number of revelations from God; hence its sacredness. The Saudi have transformed it into public toilets. Yes, public toilets. This is their love for Islam!

Then there is Jannat ul Baqi, the graveyard where the family and friends of the Prophet were buried. The Saudis have wiped the graves out of existence:

In their hatred of the Islamic heritage, the Saudis have even bulldozed the grave of Bibi Amina, the mother of the Prophet (PBUH):

Some of the other ‘feathers’ in the Salafi crown are:

The list is long. The following videos also tell the sad story of the destruction of important landmarks of the Islamic heritage:

Every year, at the time of the hajj, Muslims who wish to offer prayers at Jannat ul Baqi are routinely beaten up by the Saudi soldiers. The argument given by the Saudis is that the hajj is an occasion for praying to God and then go home. One needs to ask: what is the purpose of performing the hajj? The great sufi Mansur Hussain al-Hallaj gave the best possible answer to this question when he installed a stone cube in the backyard of his house and began to circumambulate it. To his puzzled interlocutors, he said, “If the hajj means no more than making circles around stone, I can do it in my own backyard.”

But this is precisely what the Saudi royals with their Salafi ideology want the pilgrims to do, ignoring that the hajj is one of the few occasions, perhaps the only one, when Muslims from all over the world can come together and discuss their problems. Thus in principle, the hajj is a great opportunity for freedom of expression and a great opportunity to breathe freedom in the holiest Muslim place in the world. But then freedom is anathema to the House of Saud. This is why, the Saudi army killed hundreds of Iranian pilgrims who in 1987 shouted slogans against Israel and the United States (nothing against the House of Saud). Here is the video of the Saudi assault on the Iranian pilgrims:

But it is the same House of Saud which encourages and facilitates Syrian pilgrims to stage demonstrations against the Syrian government at the time of the hajj:

Had the Saudi-Salafi fascism been a matter of intra-Muslim discord, the world may have ignored it. But this is not the case. Grand Mufti Sheikh Abdul Aziz bin Abdullah who during his hajj sermon claimed that Islam was a religion of peace was only mocking the whole civilized world. This is the same man who only a couple of weeks before had issued a fatwa saying that all churches in the Middle East should be destroyed:

What the world needs to realize is that the House of Saud is not just an enemy of Islam, it is indeed the arch-enemy of the entire human civilization. Whether you are a Christian, Jew, or Hindu, you are fit only to be killed as per Salafist theological edicts. Earned from oil and the hajj, the House of Saud has been pumping billions of dollars into ‘educational’ institutions in the Western world. The mindset being created in those institutions is hateful and paranoid. The alumni of these Salafi-tainted institutions will never belong to the culture and milieu of their host countries. They will always look upon their adopted countries as enemy sites to be either reformed or destroyed.  In order to make the world a peaceful place, the march of the House of Saud must be stopped. One sure way is to keep an eye on the money coming from Saudi Arabia. But more importantly, there should be a concerted effort to make Mukkah and Medina independent international Islamic cities regulated by an international body where Muslims of all persuasions will have authority. This body must be in control of the billions of dollars earned from the pilgrims every year. This money can be spent on creating institutions of higher education and various Muslim charity projects. So far, the billions earned and usurped by the House of Saud have been spent on promoting terrorism, and Saudi princess’ patronage of casinos and brothels is well-known. The sacred money coming from a sacred ritual should have uses which are charitable and constructive. Unless this happens, the world must brace for sheer wickedness coming from the House of Saud.

The Holy Prophet (PBUH) destroyed all the idols in the House of Allah. There is one more idol remaining.