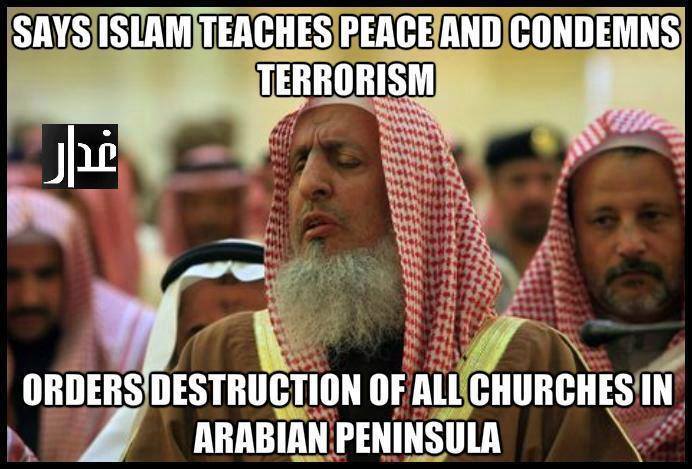 “Islam does not allow terrorism at any cost. Islam condemns all violence and terrorism plaguing the world today. Muslims should demonstrate a love for peace and unity,”

The trouble is this same Mufti considers destruction of Churches and Sufi Shrines to be a pious act. Even if people are killed with this sort of destruction. The suicide bomber is helping those worshipers who by the definition of Salfism are polytheist. This is the the true message being propagated from the pulpit of the most holy place of the Muslims. Simple emotional Muslims go for Hajj, here they are brain washed into becoming extremists.  They are given books and sermons from the misused pulpits of Mecca and Medina. They are given desparaging materials about every school of Orthodox Islam. The objective is to simply play at the emotions bring people closer to a hateful interpretation of Salfism.

Why are they doing this?

King Khalid in 1975 was the first Saudi King to start using the title Custodian of the Two Holy Mosques. Thereby claiming the Caliphate and developing the narrative that whomsoever held the two Holy Mosques of Muslims was the Caliph. The Saudi Royals had called themselves Kings prior to 1975 because their assault on the Holy Mosques was well known in the minds of the Muslims. With the new found oil money they were now able to buy pulpits of the reactionary movements of Salfism Deobandism and Wahhabism all over the world. They now had the resources to propagate the ideology of their Caliphate and buy the legitimacy of their Kingdom.

These reactionaries of Wahhabism Deobandism and Salfism are the foot soldiers of the Caliphate of House of Saud. Saudis like almost all Muslim Caliphates before them hijack Islam and Quran by buying the pulpits. Only ten percent of the world’s Muslims understand Arabic, Quranic Arabic is understood by a very small fraction of Arabic speakers so they ignorant masses are read a verse from the Quran but fed the King’s narrative since he pays for the pulpit. The propagate hate for the west and create a crop of hateful followers. This is the raw material for hate and terror. The more emotional and dedicated.

This narrative is so full of the traditional Caliphate hate which historically prepared armies to fight Christians, a fruit of this hate crop has the potential to be a Woolwich Be-header. The more passionate followers often do.

Evidence supports that extremist thinking is being exported to every part of the Islamic World by giving the pulpit to one extremist cult. It is even reaching the most tolerant and peaceful corners of the Muslim world such as Malaysia. Unlike Pakistan or Africa where poverty stricken masses are driven to Madrassas and later to gangs or terror organizations, Malaysia is fairly a affluent nation. Malaysians have shown growing intolerance as an example, recently this court decision has been handed down:

Malaysia court rules non-Muslims cannot use ‘Allah’ A Malaysian court has ruled that non-Muslims cannot use the word Allah to refer to God, even in their own faiths, overturning a 2009 lower court ruling. The appeals court said the term Allah must be exclusive to Islam or it could cause public disorder. People of all faiths use the word Allah in Malay to refer to their Gods. Christians argue they have used the word, which entered Malay from Arabic, to refer to their God for centuries and that the ruling violates their rights. One Malaysian Christian woman said the ruling would affect the community greatly. “If we are prohibited from using the word Allah then we have to re-translate the whole Bible, if it comes to that,” Ester Moiji from Sabah state told the BBC. ‘Disappointed and dismayed’

It is vitally important that Muslims must unite in condemning the hate mongering cult that has occupied Mecca and Medina since 1922 and declare that the Saudi family does not represent mainstream Islam. The creation of a holy Islamic state to encompass Mecca and Medina is the solution, Mecca and Medina do not belong to a particular dynasty or cult they belong to all Muslims. This state should represent the Islamic World at the United Nations as a permanent member of the security council, and be run jointly by all Muslims all over the world.