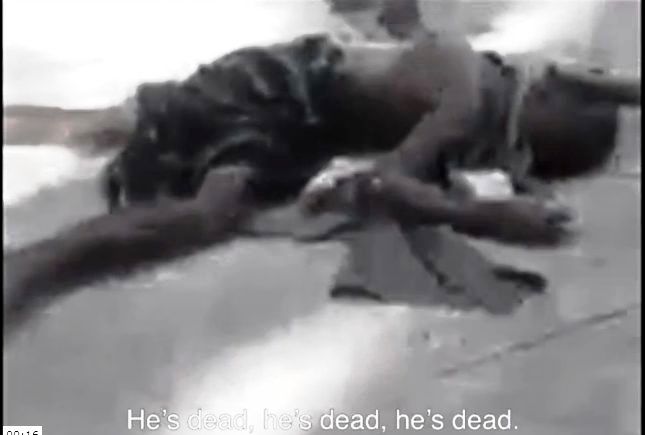 Because of its complicity or cowardice, the mainstream media has once again obfuscated facts surrounding an act of extreme wickedness on the part of Sipah-e-Sahaba/Ahle Sunnat Wal Jamaat (SSP-ASWJ). As if the Takfiri Deobandi assault on the 95 percent of living Pakistani has not been destructive enough, the SSP-ASWL terrorists have now turned to the dead in their obstinate bid to impose Saudi-financed Islamofascism in Pakistan. Last week, the student-terrorists based in an SSP-ASWJ-run Takfiri Deobandi madrassa in Pangrio, a town 225 kilometres east of Karachi, dug up a grave, tied the corpse with ropes, dragged it out, and threw it outside the graveyard after kicking and spitting on it.

Whose corpse was it?

For centuries, the Hindus of Sind have been burying their dead in Muslim graves. This has been evidence of amity and brotherhood between the Hindus and the Muslims of Sind. After all, Sind is known to be the land of Sufis.

The corpse so callously dragged and desecrated was that of Bhooro Bheel, a Hindu teenager who died in an accident. He was buried in a Muslim graveyard where Hindus have traditionally been buried alongside Muslims. But the family of Bhooro Bheel did not realize that Sind is no more a land of peace. In the past few years, Deobandis, awash with Saudi riyals and patronized and protected by the Pakistan Army and its various intelligence incarnations, have taken over the whole province. Thus when the corpse was desecrated, the media give the incident the usual twist. Here is a sample from The Express Tribune, which styles itself as the foremost liberal publication in Pakistan:

“. . . an enraged mob had dug up the body within hours, tied it with ropes and unceremoniously dumped it in the lands of a local landlord, protesting the burial of the Hindu in a Muslim graveyard. For some five days, the body lay out in the open. It is reported that seminary students from a neighbouring town had instigated the mob.”

No reference to who the perpetrators were. No mention of whose seminary it was.

Dawn, another ‘liberal’ newspaper had this to report,

“The members of the Muslim community dug up the grave on Sunday, removed the body and handed it over to the town administration.”

Dawn went on to quote “Maulvi Mithan, the prayer leader in a local mosque” as claiming: “The town was shut in protest by the Muslims.”

Maulvi Mithan is not a Shia nor a Brelvi. He is a Takfiri Deobandi mullah. And who are the “members of the Muslim community”? Did any Shia take part in it? No; it was purely an SSP-ASWJ act.

You can imagine what the rest of the Pakistani newspapers wrote: They simply did not mention even the word “seminary,” let alone even alluding to “SSP-ASWJ”. It took an Indian publication to quote a police officer who during his press briefing said,

“The incident was caused by some clerics of the extremist outfit of Ahle Sunaat Wal Jamaat, but later other Muslims joined in and dug up the body and threw it away.” 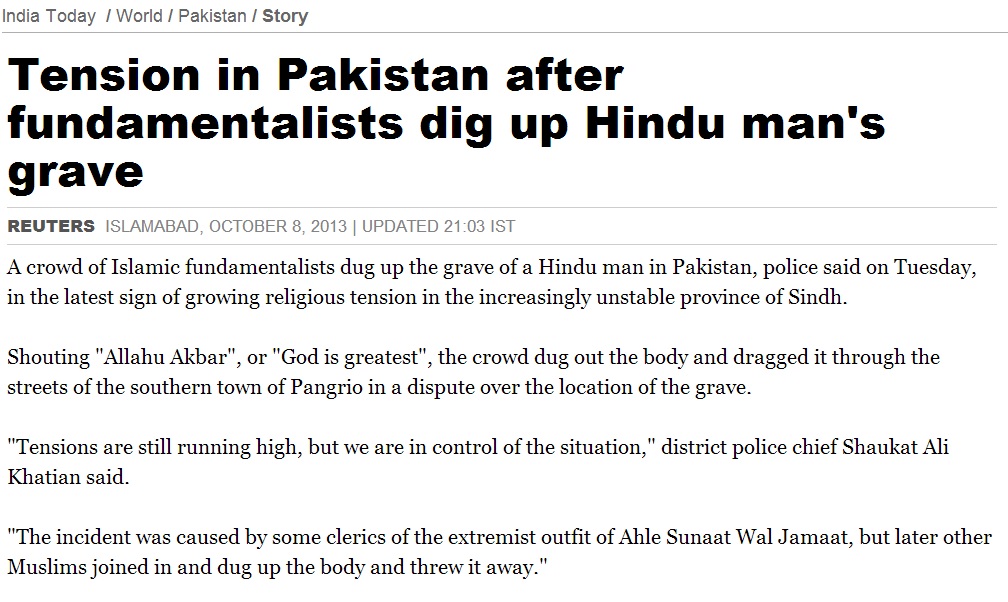 But that can be ignored; being an Indian publication, it must be a Hindu-Jewish lobby thing.

Having killed thousands of Shias, demolished countless schools and shrines, and kidnapped and forcibly converted hundreds of Christian and Hindu women, the Takfiri-Deobandis have been embolden by the realization that they are above the law. Now they have decided to take on the dead too. They have found their accomplices all over. When Najam Sethi took over as Punjab’s caretaker-chief minister, he made this statement, “Nobody is my friend and nobody is my relative during the time I am the Chief Minister of Punjab”.

(Najm Sethi notoriously released over 100 Takfiri-Deobandis from prison. After that, there was a sudden surge in Shia killing across Pakistan: http://www.thenews.com.pk/Todays-News-2-178892-Over-100-activists-of-banned-outfits-released-in-Punjab)

Given the complicity of the mainstream media, it is hard to say the extent of the Takfiri Deobandi assault on the dead. Pakistan has been rated by the United Nations as one of the worst countries on earth for the elderly (http://tribune.com.pk/story/612088/pakistan-among-the-worst-countries-to-grow-old-in-un/). But it looks like that there is more to it than the elderly. Males and females of all ethnicities, religions, and sects have been forced to cry out that the Deobandis have made their lives miserable. It is often said that if not in one’s lifetime, one can get peace in death. The Deobandis have proven even this wrong. Maybe the desecration of non-Deobandi corpses is not very widespread. Maybe this wickedness is just incipient. But in time, it will only get worse. Pakistani Deobandis take great inspiration from their Takfiri brethren in the Arab world where corpse-desecrating fatwas are issued such as it is religiously sanctioned for a Muslim to sleep with his dead wife.

Thus it is not just the Middle Eastern riyals which are wreaking havoc in Pakistan; the insane ideas coming through are as damaging.

When the Takfiri Deobandis in their incarnation as Taliban destroyed the Bamian Buddhas, no one stood up to them. No ‘liberal’ or ‘civil’ society activist came out. Little did people realize that the ‘dead’ Buddhas were going to be precursors of dead human beings. Now that the people of Pakistan have been under a constant Deobandi assault, it is time to act. The state of Pakistan dominated by ultra-reactionary judiciary, army, and executive will not come to their help. The only way out for them is to get united and recruit international support to fight out the Deobandi Goliath. Unless they do so, even a graveyard will be no refuge from the misery of living in Takfiristan.