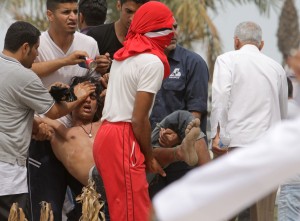 Had it not been for the last minute diplomatic maneuver initiated by the Russians, the defenders of the Bashar al-Assad’s government of Syria, U.S military attack was all but imminent and within a matter of few days, the World would have witnessed an out of control carnage of terror, destruction and bloodshed in and around that ancient land. Also, a total capitulation by the Syrian regime with respect to surrender of its chemical arsenal greatly prolonged Bashar al-Assad tenure as the head of that sorry State. U.N. inspectors were promptly deployed to determine only as to whether the Chemical weapons were used on August 21, 2013 or not. Their mandate did not require to identify the culprits in this tragedy, however, pressured by a ludicrous lobby of war mongers (Certain U.S. allies in the Middle East and their underlings), coupled with some anecdotal evidence collected by the U.N. inspectors, a few blemish fingers were pointed at Syrian government. If history is any guide, Saddam and his Baath regime was decimated within few hours even though no trace of alleged weapons of mass destruction was ever detected.

Enter Bahrain in this mix, where a Shia Muslim citizenry of almost 500,000 holds a majority in that tiny city-state. This oppressed group of people continues to be defamed, discriminated and persecuted by a tyrant Salafi Monarchy that takes its queue from Saudi Arabia, an evil empire that is determined to impose, across the globe, its Wahhabi brand of Islam. Bahrain’s Monarchy along with its followers constitutes hardly 10% of its total population, exploits the endearment of the West facilitated by Saudi Arabia and its allies, the Gulf States. One of the most powerful perk that U.S. has bestowed upon the Bahraini regime is that perennial presence of sixth fleet that serves the U.S Military as its outpost so as to monitor the activities of other players in the Gulf region. Bahrain,though, continues to suffer with the delusion that the sole purpose of U.S. keeping the sixth fleet in that specific location is to protect and defend the survival of that cruel and criminal regime.

According to the information furnished by numerous national as well as international Human Rights organizations (including human rights watch), print and broadcast media reports, and the U.S and EU government communiques, the incidents of systematic torture prior to and during the imprisonment of helpless Shia citizens of Bahrain continue to mount. Former U.S. secretary of State Hillary Clinton, former U.S. Secretary of Defense Robert Gates and other members of U.S. and European governments have repeatedly cautioned the members of Bahraini Monarchy to cease and desist all acts of criminality they so blatantly continue to commit against their own people but to no avail. An independent judge appointed by the Bahraini regime deliberated that Bahraini government is guilty of crimes against humanity and it must curtail its cruelty towards its citizens before it was too late. None of these warnings has worked and it is not expected to bear any effect, unless Saudi Arabia, the real culprit and the mastermind in this gruesome game is dealt with a similar blow that softened Bashar al-Assad and decapitated Saddam and his powerful machine.

The West, though, can not sleep on its laurels. The moment has arrived to settle the score with the reprehensible regimes such as that of Bahrain, which has no understanding of and appreciation for what a Civil society is and what does it take to permit its citizens breath that sweet aroma of liberty and enjoy individual freedom. Innocent Bahrainis never wanted to do away with the Monarchy. They simply asked that their Monarchy respect their yearnings and their aspirations. The regime, instead recruited foreign mercenaries as policemen and part of Bahraini Armed forces. These mercenaries were then used to fire at the demonstrating lot of Shia citizens to submission. Men and women were maimed and killed, indiscriminately, their homes and businesses torched and looted, and their villages leveled to the ground. In an attempt to cleanse enclaves of Shia population, non-Shia Muslims from other lands were brought in en masse and granted Bahraini citizenship instantly to tilt the population balance in regime’s favor. These apartheid like schemes have never worked in the past and these will not work at any time in the future.

The day of reckoning is going to arrive sooner or later, and most importantly Saudi Arabia better wise up and realize that its eastern provinces, that produce 90% of that kingdom’s petroleum revenue happen to house a Shia majority just as the State of Bahrain does and that both of these geographies are dangerously contiguous to each other. Once a rebellion of some sort ferments in this highly combustable region, Saudi Arabia would not be able to contain this powerful upheaval, even with all the armaments it has collected from the West, during the past 20 years. If Saddam along with his Baath regime could be decimated within a few hours because of his cruel deeds, Moammar el-Qaddafi can be put away in the most bloody manner for running a apparatus of anarchy in Libya for 42 years, Zain ul Abideen Bin Ali can be prompted to fled Tunisia, after running that poor country to the ground and finally Hosni Mubarak, the despot and the dictator par excellence as well as the darling of both Saudi Arabia and the West can be dislodged in the most humiliating fashion by a revolt initiated only by the Egyptian people , why then the mean and malicious Monarchy of Bahrain is being spared for its dastardly deeds that includes inflicting one atrocity after another upon its severely suppressed Shia populace.

Outside interference such as the ill conceived  military strike planned by the U.S., and promoted by its Middle Eastern allies as well as by the Wahhabi/Salafi lobby in the West against Syria is never a legitimate  and effective option.The international community must simply pressure Saudi Arabia, the puppeteer in this gruesome game to order the Bahraini Monarchy to cease  at once its evil endeavors.